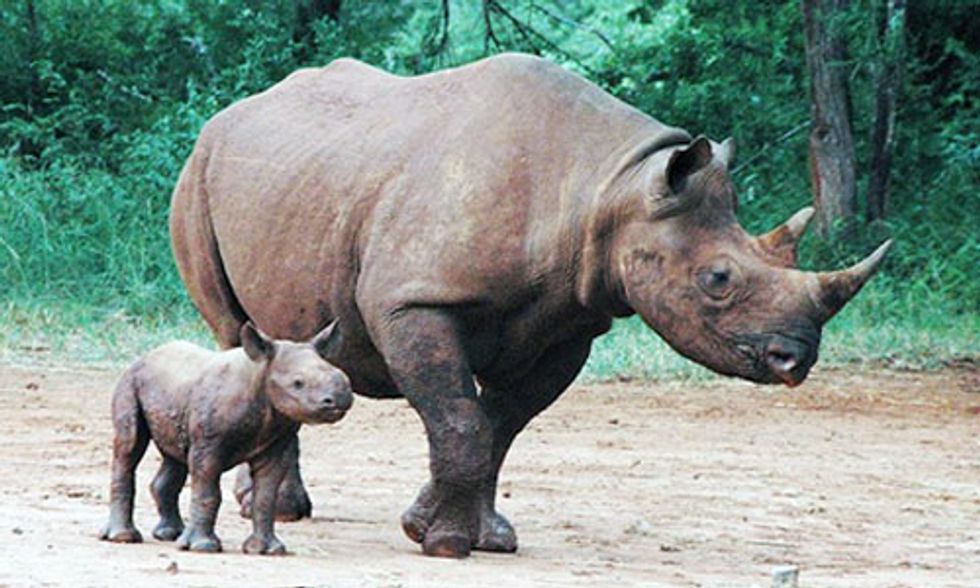 The world's rhinoceros population is seeing not one but two new and rare additions. In the foothills of Mount Kilimanjaro in Tanzania, an eastern black rhino gave birth to a baby girl named Mobo. Over in the Bardia National Park in Nepal, a greater one-horned rhino gave birth to a healthy baby boy.

DiCaprio's philanthropic foundation has donated millions and worked to preserve the world’s wildlife and threatened species. His post on social media states:

We are pleased to announce the birth of baby Rhinos in two different projects supported by the Leonardo DiCaprio Foundation. A baby girl named Mobo was born in Tanzania, and a baby boy was born in the Bardia National Park in Nepal. Many thanks for the hard work by Tony Fitzjohn and the George Adamson African Wildlife Preservation Trust in Tanzania, and World Wildlife Fund and partners in Nepal. These amazing organizations are helping to restore populations of critically endangered Rhinos in both Africa and Asia. ‪#‎wildforlife‬

A black rhino born in England gave birth to a baby girl in the foothills of Kilimanjaro in Tanzania, giving hope to the critically endangered species. Photo credit: George Adamson African Wildlife Preservation Trust in Tanzania

Another prominent animal rights advocate, Prince William, was also "delighted" to hear the news of baby Mobo, a spokesperson told People. The Duke of Cambridge interacted with Mobo's mother, Grumeti, when she lived in a wildlife park in Kent, England, where she was born.

In 2012, thanks to the Aspinall Foundation’s Back to the Wild program, Grumeti and two other eastern black rhinos were flown out of England to join the population in a protected reserve in Tanzania.

Back in her natural habitat, Grumeti mated with a fellow captive-born rhino named Jamie who had been translocated to Tanzania from the Dvur Kralove Zoo, Czech Republic in 2009. Following a 15-month gestation period, Mobo was born in mid-April, weighing 79 lbs.

The calf is the first eastern black rhino born in its natural habitat to a mother born and raised in Britain, People reported.

“Mobo’s birth illustrates perfectly our passionate belief in the true role of modern conservation as being committed to the survival of threatened species in their natural territories," Damian Aspinall, chairman of The Aspinall Foundation, said in a statement. "We believe this is preferable, wherever possible, to simply keeping them caged in an existence which does little for prospects of long term survival.”

Black rhinos are listed as critically endangered on the International Union for Conservation of Nature (IUCN) Red List, with their numbers 90 percent lower than generations ago due to widespread poaching. In Africa, there were 4,880 black rhinos in 2010.

The country of Nepal had good news of their own after a one-horned rhino gave birth to the male calf in Bardia National Park on May 22, the World Wildlife Fund (WWF) announced. The mother was recently translocated from the Chitwan National Park.

“This healthy calf, born to a recently-translocated female in the Babai Valley of Bardia National Park, Nepal, is a shining beacon of hope for greater one-horned rhinos,” Nilanga Jayasinghe, a program officer with WWF's wildlife conservation team, said in a statement.

Five rhinos, including the pregnant mother, were moved from one park to the other in order to establish a second viable population in the western part of the Terai Arc Landscape, a vital wildlife habitat that crosses both India and Nepal.

“With effective protection measures in place for the rhinos, protection for their habitat, and the establishment of new populations in historic range sites trough translocation efforts, we can ensure that their numbers continue to grow," Jayasinghe said. "This little male calf will, one day, contribute to the expansion of this new population that now, once again, calls the Babai Valley their home."

There are currently 645 rhinos in Nepal, and the translocation efforts are aimed to boost rhino numbers to its historical size of 800, the WWF said.

The greater one-horned rhino is listed as vulnerable on the IUCN Red List. Their populations are increasing overall due to strict protection.