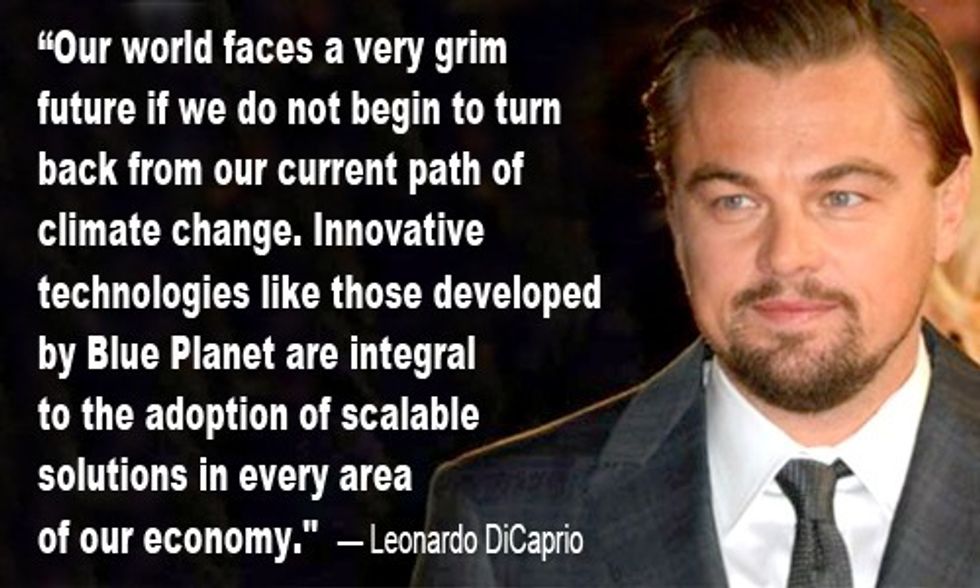 Oscar-nominee and environmental philanthropist Leonardo DiCaprio has joined the newly-formed government and policy advisory board of Blue Planet, a prominent developer of carbon capture technology based in Los Gatos, California.

Blue Planet uses patented technology to capture industrial carbon dioxide emissions from power plants and factories and converts it into concrete for commercial and residential construction.

“Our world faces a very grim future if we do not begin to turn back from our current path of climate change,” DiCaprio said in a statement about joining the advisory board. “Innovative technologies like those developed by Blue Planet are integral to the adoption of scalable solutions in every area of our economy."

"I am proud to help this incredible company bring about a more sustainable future for our planet,” he added.

It's safe to say The Revenant star knows a thing or two about carbon capture. According to the announcement, DiCaprio made a personal investment in Blue Planet and produced last year's documentary film Biomimicry, which covered carbon capture technologies, including those developed by the company. Watch here (starts at 7:50):

Many experts believe that carbon capture may prove the only realistic and affordable way to dramatically reduce carbon emissions. The idea is to not only reduce the planet's CO2 footprint but to also create useful building materials.

Daniel Tangherlini, former administrator of the United States General Services Administration, and Durwood Zaelke, president of the Institute for Governance and Sustainable Development, have also joined the Blue Planet advisory board.

“Real sustainability and conservation are achieved by taking a waste product, particularly a harmful one, and putting it to productive, economic use," Tangherlini said. "Blue Planet’s process does just that. It takes one of the most serious problems we face and turns it into materials we can use to rebuild our infrastructure.”

Zaelke stated, “It’s not possible to keep the Planet safe without aggressive carbon removal, nor to meet the goals of the Paris Agreement to ensure no net climate emissions by mid-century and maximum warming of 1.5° C above pre-Industrial levels.”

Brent Constantz, Blue Planet’s founder and CEO, said in a statement on the formation of the advisory board: “Bringing these leaders together to advise the company will guide our important initiatives with world governments. We encourage policies that promote carbon mitigation technology on a massive scale. We welcome the expertise, passion and unique platforms that Leo, Daniel and Durwood bring to the company. I look forward to working closely with them.”

He declared that “climate change is severely impacting the health of our planet and all of its inhabitants, and we must transition to a clean energy economy that does not rely on fossil fuels, the main driver of this global problem.”

The UN Messenger of Peace played an active role at the Paris climate talks, urging mayors and governors to “commit to no less than 100 percent renewable energy as soon as possible" and he also sits on the advisory board for Powerhive, an energy provider that supplies “affordable, reliable and productive solar electricity to rural communities in the developing world.”

From Hottest Place on Earth in Australia to LA and Ontario’s Winter Heat Waves, 2016 Already on Track to Be Hottest Year Ever Recorded