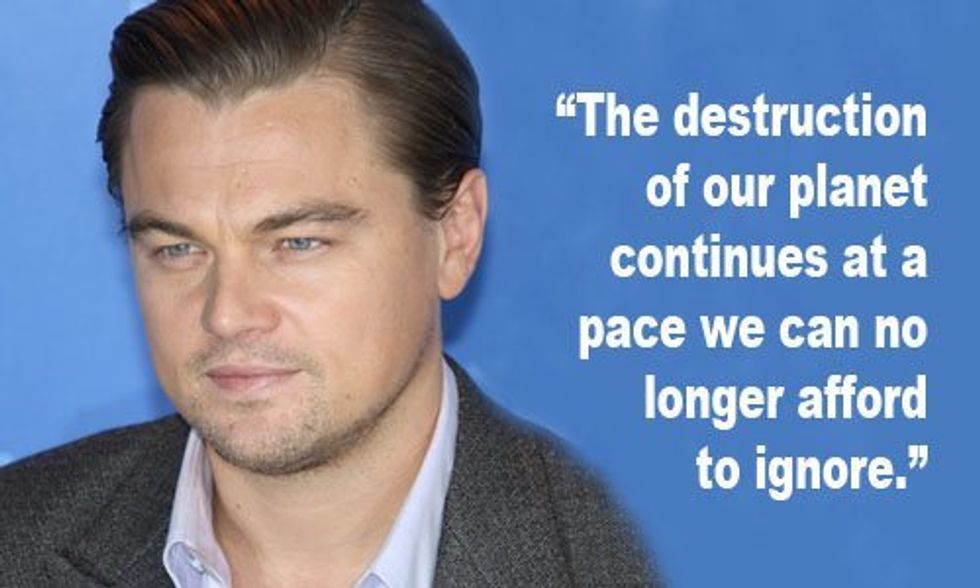 Leonardo DiCaprio might be best known for his movies, but in recent years he been getting a lot of press for his dedication to protecting our planet. From speaking at the UN on climate change to donating millions of dollars to protect our oceans to participating in the People's Climate March to building an eco-resort in Belize, DiCaprio is certainly prioritizing the need to protect mother Earth.

To further his commitment, the Leonardo DiCaprio Foundation announced this week $15 million in grants to more than 30 environmental organizations who are working to preserve and protect the future of the planet. These grants further the foundation’s approach to helping tackle some of today’s most pressing environmental issues.

“The destruction of our planet continues at a pace we can no longer afford to ignore,” said Leonardo DiCaprio. “I am proud to support these organizations who are working to solve humankind’s greatest challenge.”

These projects include "concrete and early-phase solutions to protect key species and threatened marine and terrestrial ecosystems, to empowering indigenous communities to be the long-term stewards and protectors of their natural resources," according to the foundation. Since 2010, the foundation has funded more than 70 high-impact projects in more than 40 countries worldwide.

“Our partners on the ground are up against powerful industries that want unfettered access to our planet’s resources,” said Justin Winters, executive director of the Leonardo DiCaprio Foundation. “We are dedicated to helping further their efforts to protect our oceans, forests and wildlands.”

Here's a list of the organizations benefitting from these grants:

“No organization or individual alone can protect our planet’s life-giving engine. Partnering with the Leonardo DiCaprio Foundation allows National Geographic Pristine Seas to help protect the wildest places in the ocean, so that the ocean can continue to provide for all of us,” said Dr. Enric Sala, National Geographic explorer-in-residence.

J. Charles Fox, program director of Oceans 5, also showed his gratitude for the grant. “The Leonardo DiCaprio Foundation brings a strategic focus to helping coastal communities protect biodiversity. They provide significant knowledge and capacity to Oceans 5, so that we can better achieve our objectives for ocean conservation.”

In addition to the support to environmental organization, the foundation supported several winners of the Goldman Environmental Prize, the world’s largest prize for grassroots environmental activists, to help advance their campaigns. These winners include:

"We have a responsibility to innovate a future where the habitability of our planet does not come at the expense of those who inhabit it," Leonardo DiCaprio said.