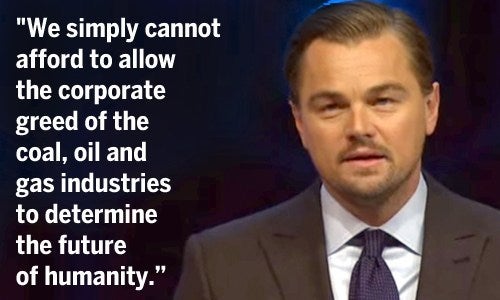 Leonardo DiCaprio blasted the “corporate greed of the coal, oil and gas industries” in a speech at the World Economic Forum in Davos, Switzerland Tuesday.

DiCaprio was honored along with will.i.am, Yao Chen and Olafur Eliasson for making important contributions to improving the state of the world. He was recognized for his work in tackling climate change through his Leonardo DiCaprio Foundation and his position as an UN Messenger of Peace.

During his acceptance speech, DiCaprio urged world leaders to do more. “Last month in Paris, world leaders reached a historic agreement that provides a concrete framework to reduce carbon emissions,” he said. “This was an important first step, but we are a long way off from claiming victory in this fight for our future and for the survival of our planet.”

While traveling recently to film a documentary on the impacts of climate change, DiCaprio said he was “astonished to see that ancient glaciers” in Greenland and the Arctic are “rapidly disappearing well ahead of scientific models.” In India, he saw farmers’ fields devastated by unprecedented flooding. He said we need to keep fossil fuels in the ground, urged business leaders to divest from fossil fuels and pushed for a rapid transition to renewables.

“We simply cannot afford to allow the corporate greed of the coal, oil and gas industries to determine the future of humanity. Those entities with a financial interest in preserving this destructive system have denied and even covered-up the evidence of our changing climate,” he said. “Enough is enough. You know better. The world knows better. History will place the blame for this devastation squarely at their feet.”

“Our planet cannot be saved unless we leave fossil fuels in the ground where they belong,” he told the audience. “Twenty years ago, we described this problem as an addiction. Today, we possess the means to end this reliance.

“The challenge before us requires each and every one of us to take action. We owe this to ourselves, but more importantly to the future generations who are counting on us.”

DiCaprio also announced that his foundation is pledging a new commitment of $15 million to environmental projects, including one that protects 6.5 million acres of rainforest on Sumatra in Indonesia from what DiCaprio described as the “invasive and destructive practices” of the palm oil industry.

Last week, DiCaprio won the Golden Globe for Best Actor for his role in The Revenant. In an interview with Charlie Rose prior to the Golden Globe awards ceremony, DiCaprio said the film was a “turning point” in his life and really drove home for him the need to take action on climate change. DiCaprio is nominated for an Oscar for The Revenant, which has 12 Oscar nominations in all—more than any other film this year.