Leonardo DiCaprio: 'Do Not Wait Another Day' to Move to 100% Renewable Energy 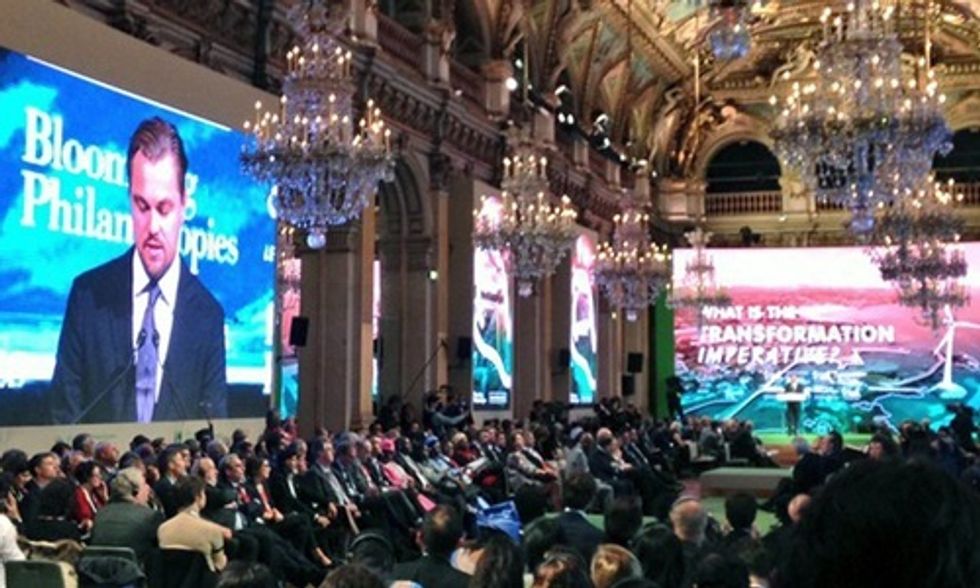 Leonardo DiCaprio delivered a powerful speech Friday at the Climate Summit for Local Leaders at City Hall in Paris, a side event of COP21. The event was hosted by Mayor Anne Hidalgo of Paris and former mayor of New York City and the United Nations secretary general’s special envoy for cities and climate change Michael R. Bloomberg. Mayors from Los Angeles, Berlin, Madrid, Johannesburg and other major cities around the world gathered to discuss their role in mitigating climate change.

“Our world leaders are here in Paris in an effort to finalize a global agreement 20 years in the making, to finally address the very real threat that climate change poses to our planet,” DiCaprio said to the mayors. “These leaders have met before. They met in Kyoto, they met in Copenhagen, and in cities on every continent, but each and every time, they have come up short. This time must be different, because we are fundamentally running out of time.”

Thank you @LeoDiCaprio for your commitment against #ClimateChange! #Cities4Climate #COP21 https://t.co/TWqqXGYdhT
— Paris (@Paris)1449243175.0

“Climate change is the most fundamental and existential threat to our species," he continued. "The consequences are unthinkable and worse, it has the potential to make our planet unlivable.

“So to all the mayors and governors in this room today, I implore you to join with your peers to commit to moving to no less than 100 percent renewable energy as soon as possible. Do not wait another day.

“Our future will hold greater prosperity and justice when we are free from the grip of fossil fuels. Now to get there, we must act. We must finally leave behind the inefficient technologies of another century and the business models that they have created.”

DiCaprio has been a long time environmental advocate. In September, he pledged to divest from fossil fuels and invest in climate solutions on behalf of himself and the Leonardo DiCaprio Foundation.

A plea to the mayors at #COP21: Commit to moving to #go100percent renewable energy. Do not wait another day. Photo c/o: Here Now.

Also at the Climate Summit for Local Leaders, 1,000 mayors and local leaders adopted a declaration to “support ambitious long-term climate goals such as a transition to 100 percent renewable energy in our communities, or a 80 percent greenhouse gas emissions reduction by 2050."