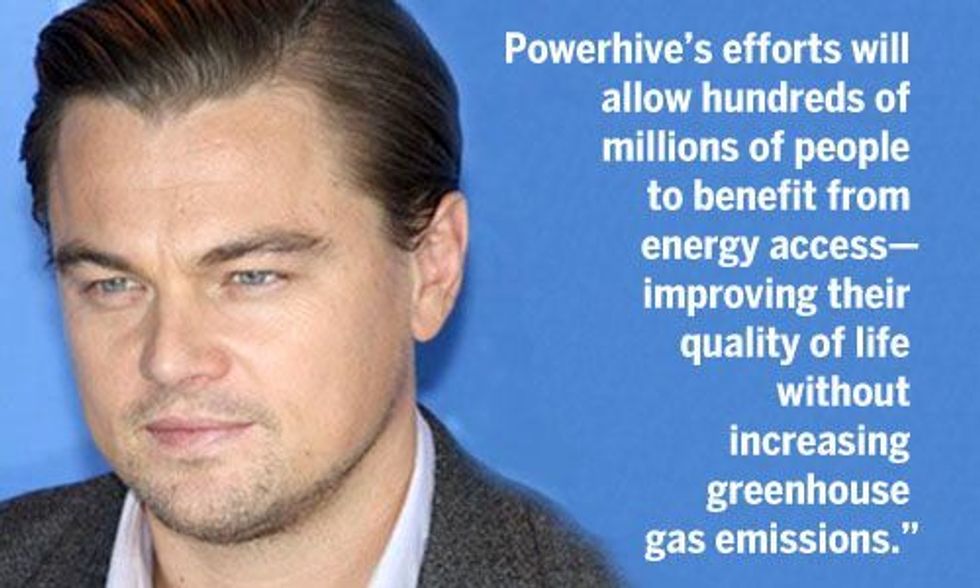 Leonardo DiCaprio and former UK Climate Change Minister Greg Barker are teaming up to deliver renewable energy to some of the world's 2 billion citizens that live without access to reliable electricity. Powerhive, an energy solutions provider for emerging markets, announced yesterday that DiCaprio and Barker have joined its advisory board.

Proud to join @Powerhive’s advisory board to support technologies at the forefront of moving away from fossil fuels: https://t.co/HXJ4OTmVxP
— Leonardo DiCaprio (@Leonardo DiCaprio)1450135335.0

According to the company, it deploys "renewable microgrid technologies" that "supply affordable, reliable, and productive solar electricity to rural communities in the developing world." The technologies provide "long-term, scalable solutions for sustainable economic development in some of the world’s poorest communities. It also helps ensure greater energy security and resilience against extreme weather events caused by climate change."

“The agreement at COP21 is a momentous step, but the real work starts now—with businesses, entrepreneurs, activists and innovators stepping up with 21st century solutions,” said Powerhive CEO Christopher Hornor. “We’re thrilled to have Greg and Leo on the team. Their vision and pragmatic determination to protect the environment aligns with our mission to offer concrete, scalable solutions to energy poverty and climate change.”

DiCaprio, a UN Messenger of Peace, is well known for his philanthropic efforts through the Leonardo DiCaprio Foundation. He's also a powerful advocate for environmental action. He played an active role at the Paris climate talks, urging mayors and governors to "commit to no less than 100 percent renewable energy as soon as possible. Do not wait another day," he told the audience. In September, the movie star and activist announced he would be divesting from fossil fuels.

His foundation raised a staggering $40 million to protect endangered species and help preserve the environment at its second annual fundraising gala in July. He's also donated millions of dollars to protect the world's oceans, participated in last year's People’s Climate March and even built an eco-resort in Belize.

“We have the ability to transition our world to 100 percent clean, renewable energy, using existing techniques, within our lifetime. I am proud to support technologies like those developed by Powerhive that are at the forefront of the trend to move away from fossil fuels. This is an important and real step in our fight against climate change,” said DiCaprio. “Powerhive’s efforts will allow hundreds of millions of people to benefit from energy access—improving their quality of life without increasing greenhouse gas emissions.”

Lord Gregory Barker is a former member of British Parliament and minister of State for Energy and Climate Change, whose term ended earlier this year. When David Cameron became Prime Minister in 2010, Barker said he wanted Britain to become the “Saudi Arabia of green energy” while London could become the “global hub of green finance."

“The historic global agreement to tackle climate change that was announced in Paris will give added impetus and urgency to our already ambitious plans to bring clean, zero carbon electricity to off-grid communities in the developing world,” said Barker. “Part of my role as an advisor will be to ensure Powerhive’s strategic expansion and critical infrastructure solutions work well with the plans and aspirations for energy access of a whole range of countries across the global South.”

Powerhive works with global utilities and energy providers to deploy its technologies. Its flagship project was recently acquired by Enel Green Power, which will allow Powerhive to provide 90,000 people in western Kenya with clean energy. "The project is a major milestone that will be a blueprint for future energy access projects in developing countries," said Powerhive.