Lemurs and Northern Right Whales Near Brink of Extinction 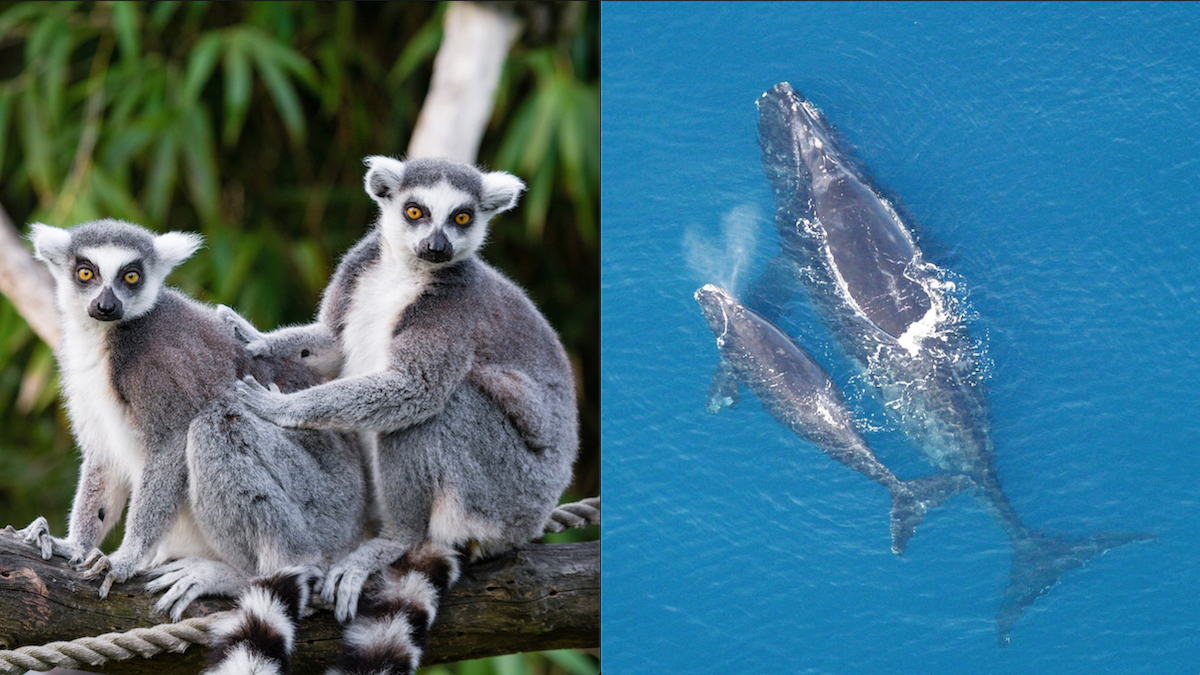 A new analysis by scientists at the Swiss-based International Union for Conservation of Nature (IUCN) found that lemurs and the North Atlantic right whale are on the brink of extinction.

For lemurs, the analysis found that almost one-third of the species in Madagascar are critically endangered while 98 percent are threatened or worse, according to the IUCN’s updated Red List of Threatened Species. The demise of lemurs is largely attributed to deforestation and hunting on the giant island off eastern Africa, conservationists said Thursday, as the AP reported.

The IUCN also says there were fewer than 250 mature North Atlantic right whales believed to be alive in 2018, marking a 15-percent drop since 2011. That number includes about only 100 breeding females.

“At the heart of this crisis is a dire need for alternative, sustainable livelihoods to replace the current reliance on deforestation and unsustainable use of wildlife,” Grethel Aguilar, IUCN’s acting director general, said in a statement, as The Washington Post reported. “These findings really bring home the urgent need for an ambitious post-2020 biodiversity framework that drives effective conservation action.”

At the end of June, one dead whale was spotted off the coast of New Jersey. That six-month-old calf had been struck several times on the head, suggesting one or possibly two vessel collisions, according to The New York Times. Increasingly, collisions with ships, entanglements in fishing nets, and underwater noise pollution are killing the animals, which rely on echolocation for basic activities such as feeding, communicating and finding mates, as The Washington Post reported.

The North Atlantic right whale also faces an increased threat from the climate crisis. The IUCN says that warming ocean temperatures have likely pushed the species’ main prey species further north during summer, into the Gulf of St. Lawrence, where the whales are more exposed to accidental encounters with ships and also at high risk of entanglement in crab-pot ropes.

The whale’s preferred home, in the Gulf of Maine’s deep waters, has warmed nearly 9 degrees Fahrenheit since 2004, faster than 99 percent of the world’s oceans for much of this century, according to The New York Times.

The prospects are bleak for the North Atlantic right whale now that President Trump lifted restrictions on commercial fishing in a key area of the whale’s habitat.

“Unless we act decisively to turn the tide, the next time the right whale’s Red List status changes it will be to ‘extinct,'” Jane Davenport, a senior attorney for Defenders of Wildlife, said in a statement, as The Washington Post reported.

The deaths of 30 Atlantic right whales were confirmed as human-caused between 2012 and 2016, according to the IUCN report, and all but four were caused by entanglement in fishing gear.

Peter Corkeron, a senior scientist at the New England Aquarium, has chronicled the gruesome deaths of right whales as the director of the National Oceanic and Atmospheric Association’s research program for large whales for the last decade. He told the New York Times he feared the listing would have little impact.

“A lot of the dynamic was bad anyway, and under Trump it just got worse,” Corkeron said. “People are terrified to do anything about right whales at the moment.”

The update to the “Red List of Threatened Species” shows that 32,441 species are threatened out of a total of 120,372 on the list.

“We have to take bold and rapid action to reduce the huge damage we’re doing to the planet if we’re going to save whales, frogs, lemurs and ultimately ourselves,” said Tierra Curry, a senior scientist at the Center for Biological Diversity, as The Washington Post reported. “We really can do all of these things, but we need world leaders to stand up and do them.”