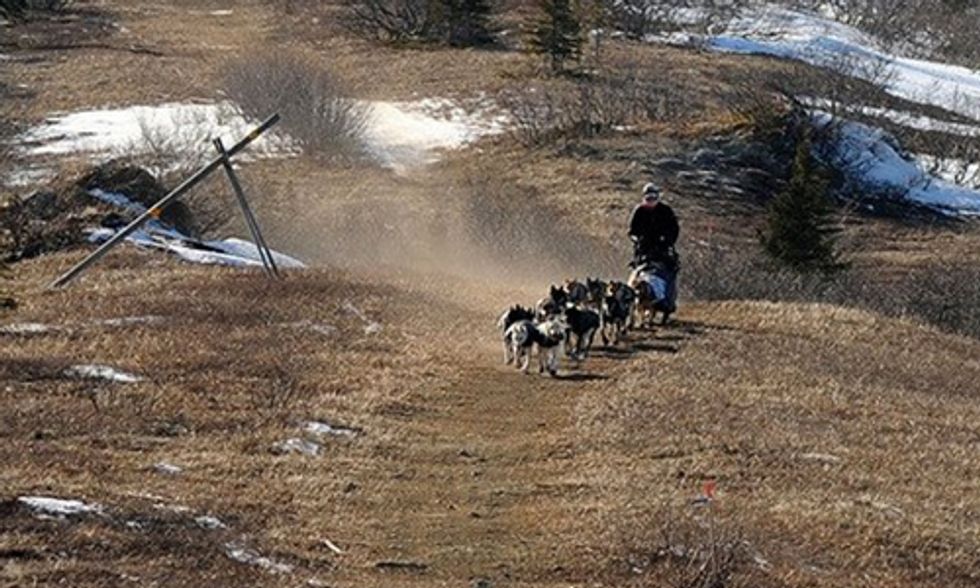 Alaska is having yet another mild winter. A ski area near Juneau recently had to close until it gets more snow. Now, the iconic Iditarod Trail Sled Dog Race is dealing with the consequences of a changing climate. For only the second time in its 43-year history, the start of the Iditarod will move north to Fairbanks.

Traditionally, the race starts in Anchorage, but due to a lack of snow in certain areas, the starting line will be moved 300 miles north. The starting line was moved to Fairbanks one other time in 2003 when unseasonably warm weather made the trail impassable.

The ceremonial start will still take place in Anchorage on March 7, but the official start of the race will be in Fairbanks on March 9. The race will still end in Nome as always, but the rerouted course is 968 miles long as opposed to the standard 987 miles from Anchorage.

The decision to reroute the course was made last week when the board of directors of the Iditarod Trail Committee held a special meeting. Board members heard a trail report from a committee, which flew over various portions of the trail to assess the conditions and found that "conditions were worse in the critical areas than in 2014 and therefore, not safe enough for this year’s race."

The race was almost moved to Fairbanks last year because of a lack of snow, but officials decided to keep the start of the race in Anchorage. "Bruised and beaten up" racers were extremely critical of that decision because the trail was so treacherous, according to News Miner. This year, the course from Anchorage looked even worse. "The troublesome areas had half as much snow as in 2014, and the bad spots were twice as long," said Rick Swenson, Trail Committee board member.

“This year, you can’t go through a rock,” said board member Aaron Burmeister. “There’s boulders and rocks that we’ve never seen there in 20-some years that are littering all the gorge, places that you’d never even see a rock because you’re going over feet of snow going through there. This year, you’re looking at bare ground.”

“While some snow did fall east of the Alaska Range over the past couple of weeks, other parts of the trail did not get much or any of it at all,” said Stan Hooley, executive director for the Iditarod Trail Committee. It might seem early to make the call, but Race Marshall Mark Nordman explains that transporting and coordinating all of the supplies and equipment takes time.

The unseasonably warm weather and lack of snow is not some anomaly. Over the past 50 years, temperatures across Alaska increased by an average of 3.4 degrees Fahrenheit, according to the U.S. Environmental Protection Agency. Alaska's winter warming was twice the national average over that time period, and average annual temperatures in the state are projected to increase 3.5 to 7 degrees by 2050.

Anywhere from 50 to 100 teams race every year. The sport has a long history that goes back far before it became a formalized race when it was simply a means of transportation. Now, climate change puts the legacy of the "last great race" in question.