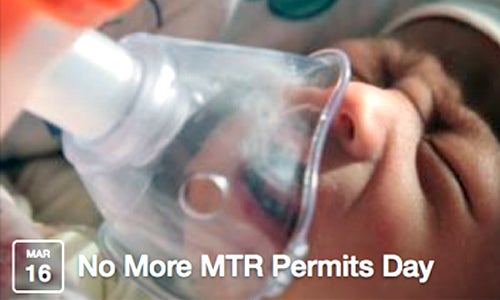 With mountaintop removal mining on the ropes, as the last bank financiers ditch lending support amid new scientific research that demonstrates “solid evidence that dust collected from residential areas near mountaintop removal sites causes cancerous changes to human lung cells,” residents from across central Appalachia’s coal country are converging today on the West Virginia Department of Environmental Protection headquarters in Charleston to demand an end to new permits.

A day of reckoning is arriving in Appalachia.

In the aftermath of last year’s world attention on the state’s handling of the coal chemical disaster on Elk River, and with the once invincible “dark lord” of mountaintop removal Don Blankenship facing criminal conspiracy charges, a renewed coalition of citizens groups called the People’s Foot movement is confronting state and federal agencies directly for their complicity in ignoring the growing and indisputable evidence on health damages from mountaintop removal mining.

“Our politicians and all government agencies need to stop running from the truth that we are forced to live and die with everyday,” said Maria Gunnoe, the Goldman Prize recipient and an organizer with the Ohio Valley Environmental Coalition in West Virginia. “The science shows that mountaintop removal kills people. Why is mountaintop removal still being permitted? Is it because we don’t matter or is it because someone’s financial status depends on us dying quietly one activist at a time?”

The writing is on the wall—and in two dozen peer-reviewed scientific studies: Newspapers will one day feature stories about “wrongful death settlements with the coal companies—such as last summer’s $26 billion verdict against the tobacco companies for lung cancer—and criminal charges of negligent homicide by policymakers and politicians who have openly allowed such a health crisis to take place,” as I’ve noted before.

No one knows this better than Stanley Sturgill, the legendary retired coal miner and mine inspector from Harlan County, Kentucky, who served 41 years in the mines.

“I’m traveling from Harlan County, Kentucky because I want to lend (100 percent) my hand in support of trying to stop the insane practice called mountaintop removal mining,” Sturgill said. “This practice of coal mining is not only killing the folks down stream of these mines, but also the very miners that blast our mountains away. ”

Now suffering with black lung disease, a preventable malady that still kills three coal miners daily, Sturgill has testified in hearings across the country, including the recent Climate March in New York City, occupied the Kentucky governor’s office, and been arrested on Capitol Hill in Washington, DC for simply requesting a meeting with his member of Congress to discuss the devastating impact of mountaintop removal operations on his community, his fellow miners and the environment.

Sturgill’s statement at today’s People’s Foot rally puts the state of West Virginia, and the nation, on notice:

Hello, my name is Stanley Sturgill and I am 69 years old. I’m a retired and very proud UMWA coal miner and federal coal mine inspector (MSHA) with 41 years of service to the coal industry.

I fully support all of our miners, I work for their health and safety every day, but in no way, do I support the mining method of MTR, whether it’s scab or UMWA doing the mining. That’s why I plan to attend the “People’s Foot” rally in Charleston, WVA. I’m traveling from Harlan County, Kentucky because I want to lend (100 percent) my hand in support of trying to stop the insane practice called mountaintop removal mining. This practice of coal mining is not only killing the folks down stream of these mines, but also the very miners that blast our mountains away.

I know coal bought politicians and King Coal don’t believe in science and scientific studies that prove mountaintop removal is killing people and they also refuse to stop this type of coal mining. So today I would like to let them know of one thing, there is no statutes of limitations on killing people, even the folks here in Appalachia.