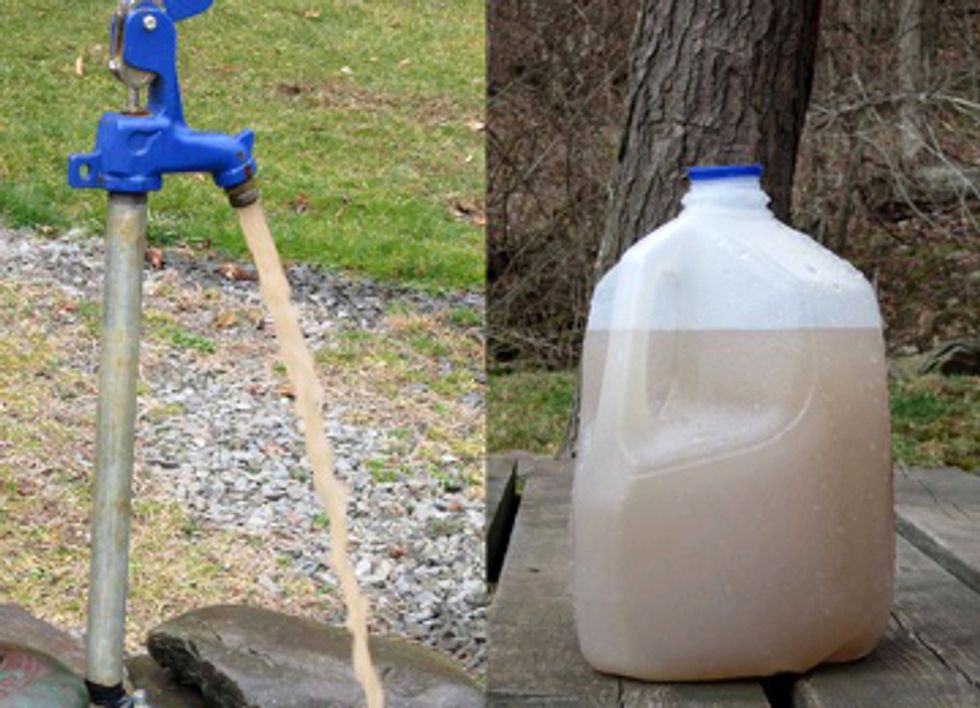 The Los Angeles Times published a story yesterday reporting on a leaked document that indicates that the U.S. Environmental Protection Agency (EPA) has never conveyed to the public the possibility that methane released during drilling “and perhaps during the fracking process" resulted in “significant," and possibly long-term, “damage to the water quality" of a drinking water source for 19 families in Dimock, PA, even though some staff believed this was the case.

A Dimock, PA, resident who did not want to be identified pours a glass of water taken from his well after the start of natural gas drilling in 2009. Photo credit: Reuters

The story reports that this crucial interpretation—which stands in stark contrast to the narrative being pushed by industry that the EPA found Dimock's water to be “safe"—was evidently presented to the highest level staff in the region sometime in the spring of 2012.

Yet the EPA closed its investigation of contaminated drinking water supplies in Dimock just months later (July 2012), declaring that it was no longer necessary for residents to be provided with alternative drinking water supplies. In doing so, it provided no justification based on the data it had in its possession, which some believed pointed to significant and possibly long-term damage to local drinking water.

The EPA simply walked away and asked the public and the residents of Dimock to take its word for it. Indeed, the agency did not even mention the word “methane" at all in its press release announcing the end of the investigation. As a result, it was widely reported in the mainstream press that the EPA had found the water in Dimock was “safe" to drink, as reported in USA Today and elsewhere. This perception persists among many in the general public.

If this news is true, why has the EPA failed to provide a proper scientific explanation for effectively declaring Dimock's water safe, and why has it abandoned the residents of Dimock? Is it because of pressure from the oil & gas industry? The people of Dimock deserve some answers.

What Happened in Dimock?

In 2010, the Pennsylvania Department of Environmental Protection determined that shoddy drilling practices by Cabot Oil and Gas Corporation had resulted in methane contamination of a large aquifer in Dimock, polluting the drinking water of 19 families. The state's enforcement against Cabot then followed a tortured path: it first prohibited Cabot from drilling any further wells in the area. Then the state lifted that ban, and subsequently promised the residents of Dimock a new pipeline to supply uncontaminated drinking water from a neighboring community. Then it rescinded that promise.

Concerned about the state's spotty enforcement, on behalf of the Dimock residents, the Natural Resources Defense Council (NRDC) asked the EPA to step in and launch its own investigation of the water quality. But when the EPA released the results of its investigation, effectively declaring Dimock's water safe, it failed to share two important pieces of information.

First, it did not share that Cabot had contaminated the water with dangerously high levels of methane.

Second, it limited the scope of its discussion to whether certain federal standards for specific contaminants—not including methane—were exceeded.

That was ostensibly because the investigation was pursuant to the EPA's specific and limited powers under the federal “Superfund" law and Safe Drinking Water Act only. These laws do not specify standards for all contaminants that may present a risk to human health and/or the potability of a water supply, including methane, certain other organic compounds and new/uncommon chemicals such as those that may be used in drilling and fracking operations.

Critically, though, some of the EPA's initial memos did reference, and express concern about the potential health impacts of, other such contaminants that were found in the families' water—including glycol compounds, Bis(2-ethylhexyl) phthlate (DEHP) and 2-methoxyethanol.

But evidently a decision was made not to discuss or further pursue them in the final analysis. Indeed, the agency did not report that multiple other contaminants were, in fact, detected, at levels below those specified under those laws. And none of these contaminants, including methane, were mentioned in the EPA's final determination. Nor did the EPA mention that the federal Agency for Toxic Substances and Disease Registry was—and is still—continuing an investigation into the potential short- and long-term health risks of using Dimock water with these chemicals present.

Yet, the leaked report made public yesterday suggests that the EPA basically declared that Dimock residents' water was okay to drink, despite the fact that some of its own staff believed that it showed serious contamination, possibly from fracking, that was likely to persist for a long time. It suggests that the EPA's own consultants, and perhaps field staff, believed not only that the Dimock aquifer had been contaminated by high levels of methane from the Marcellus Shale, but that this contamination resulted in “significant damage to the water quality."

So, once again, we are left with the question why—in the face of these doubts,—the EPA would decide to terminate its investigation in Dimock without making public any analysis of its data that supports its decision to walk away, and instead keep internal dissenting views a secret. And why—a year later—haven't they investigated those views further to determine the level of risk?

Troubling Trend at the EPA

Unfortunately, what appears to have happened in Dimock, PA, is just the latest in a larger, troubling trend we're seeing of the EPA failing to act on science in controversial fracking cases across the country. Instead, the agency appears to be systematically pulling back from high-profile fracking investigations.

First, in March of 2012—without explanation—the EPA abruptly withdrew an emergency order it had issued two years earlier against Range Resources Corporation after the agency found nearby natural gas production operations from the company had likely caused methane and toxic chemical contamination in Parker County, TX, drinking water supplies. The order had required Range Resources to provide families with alternative water supplies, install explosivity meters in homes and remediate the aquifer.

But there is no evidence the company ever fully completed these or other requirements of the order. Yet the agency withdrew the emergency order. In fact, reports indicate the water there remains contaminated and a health threat, and the EPA Inspector General is investigating the matter.

On top of that, the Associated Press reported that a leaked confidential report proved that the EPA had scientific evidence against Range, but changed course after the company threatened not to cooperate with the agency's ongoing national study of fracking. The Associated Press also reported that interviews with the company confirmed this. When asked to explain its actions in light of all of this, the EPA's silence has been deafening.

Then, in late June 2013, EPA made an equally abrupt and unexplained announcement that it was abandoning an investigation into a high-profile drinking water contamination case in Pavillion, WY. That report generated fierce pushback from the oil and gas industry. Even though the U.S. Geologic Survey released its own data in 2012 that backed up the EPA's findings, suddenly, and without any meaningful explanation, the agency announced that it would not finalize its report and instead would leave matters in the hands of Wyoming regulators. As in Parker County and Dimock, these state regulators are the reason the EPA stepped in to begin with—because they had not given adequate attention to residents' drinking water complaints in the first place.

Now it seems the third shoe drops in Dimock—the latest in what was a triumvirate of highly anticipated federal fracking-related investigations.

Not only does this pattern of behavior leave impacted residents in the lurch, but it raises important questions as to whether the agency is caving to pressure from industry, antagonistic members of Congress and/or other outside sources.

This trend also calls into serious question the agency's commitment to conducting an impartial, comprehensive assessment of the risks fracking presents to drinking water—a first-of-its-kind study that is now in its fourth year, with initial results now promised in 2014. The EPA recently announced that it had delayed the expected final date of this study by 2 years.

With communities across the country already suffering the consequences, it must deliver an impartial and thorough evaluation of the risks.

The EPA has said that there is no connection between its dropping its investigations in Dimock, Pavillion and Parker County, and that it remains committed to its national study. But if the EPA is really committed to understanding the risks of fracking to drinking water, then it doesn't make sense that the agency would drop the investigations in these three cases, where they have been collecting substantial data. By abandoning these inquiries and leaving them in the hands of state regulators that, in each case having shown they are not up to the task, the EPA is walking away from important scientific information and analysis.

Our federal government has a responsibility to protect the citizens in communities that are suffering consequences from fracking and to give them the full facts. It owes it to the American people to fully and fairly investigate every case that can help to answer some of the vexing scientific questions as to whether, and if so how, fracking and related activities contaminate drinking water. Sadly, the EPA's recent pattern of activity suggests neither has been happening.

If what we're hearing is true, this is a disturbing indication that the EPA may not be telling the American people everything it knows about the risks of fracking or providing them with the explanations that they deserve. Americans are counting on the administration to protect them against an industry that's running wild, but it is falling down on the job from one community to the next.