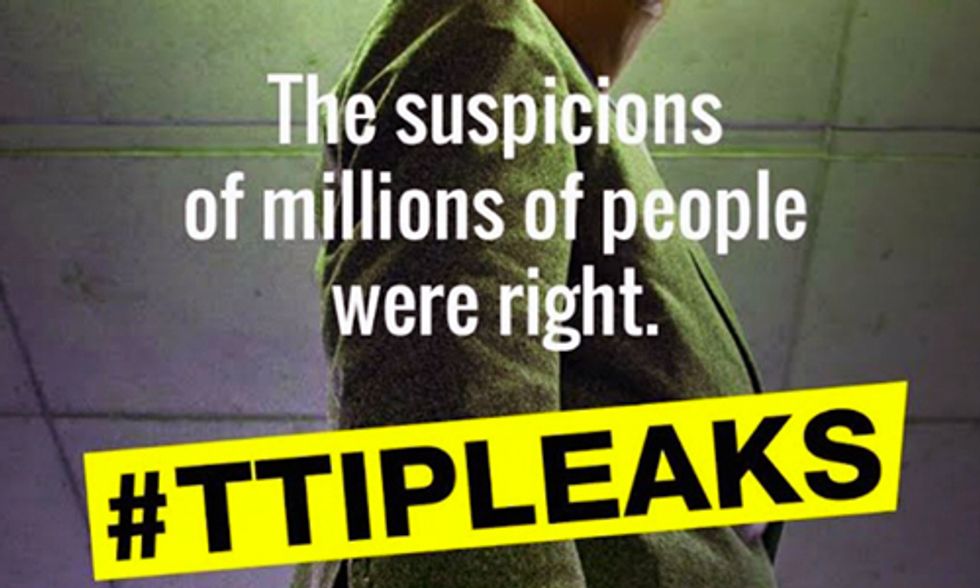 Confirming that the TransAtlantic Trade and Investment Partnership (TTIP) amounts to "a huge transfer of power from people to big business," Greenpeace Netherlands on Monday leaked 248 secret pages of the controversial trade deal between the U.S. and EU, exposing how environmental regulations, climate protections and consumer rights are being "bartered away behind closed doors."

The documents represent roughly two-thirds of the latest negotiating text, according to Greenpeace and on some topics offer for the first time the position of the U.S.

Before Monday, elected representatives were only able to view such documents under guard, in a secure room, without access to expert consultation, while being forbidden from discussing the content with anyone else. This secrecy runs "counter to the democratic principles of both the EU and the U.S.," the website ttip-leaks.org declares.

And in the absence of transparency, "hard won environmental progress is being bartered away behind closed doors," Faiza Oulahsen, campaigner for Greenpeace Netherlands, said.

"Whether you care about environmental issues, animal welfare, labor rights or internet privacy, you should be concerned about what is in these leaked documents," Oulahsen said. "They underline the strong objections civil society and millions of people around the world have voiced: TTIP is about a huge transfer of democratic power from people to big business. We call on all elected representative and other concerned parties to read these documents and engage in the debate."

Greenpeace Netherlands zeroes in on four aspects of serious concern in the obtained texts, including:

According to the Guardian, which saw the original documents (retyped by Greenpeace and available here):

U.S. proposals include an obligation on the EU to inform its industries of any planned regulations in advance and to allow them the same input into EU regulatory processes as European firms.

American firms could influence the content of EU laws at several points along the regulatory line, including through a plethora of proposed technical working groups and committees.

"It's no secret that the negotiations have been on increasingly shaky ground," Taylor continued, citing petitions signed by millions of Europeans and ongoing public protests. "These leaks should be seen as another nail in the coffin of a toxic trade deal that corporate power is unsuccessfully trying to impose on ordinary people and our democracies."

Similarly, War on Want Executive Director John Hilary declared: "Today marks the end of TTIP. Total secrecy was the only way the European Commission could keep the European people from learning the truth about these appalling negotiations and now the cat is out of the bag."

"We have long warned that TTIP is a danger to democracy, food safety, jobs and public services," Hilary continued. "Now we see it is even worse than we feared. Today's leak shows the European Commission preparing to sell us down the river, doing deals behind closed doors that will change the face of European society for ever. It is simply unacceptable that a group of unelected officials should be allowed to contemplate such a thing without any public scrutiny."

The 13th round of TTIP talks took place last week in New York. U.S. President Barack Obama, who was stumping for the deal last month in Germany, had hoped to wrap up negotiations by the time he left office—a timeline that looks increasingly unrealistic.

Public support on both sides of the Atlantic has plummeted; leading U.S. presidential candidates oppose the deal and others like it; and President François Hollande on Sunday became just the latest French official to express skepticism about the deal.