Leading the Way to a Low-Energy Future 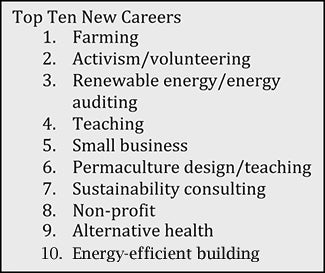 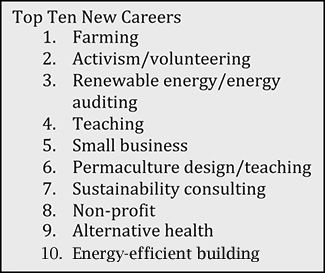 The failure of the Copenhagen climate talks taught us one thing—that hoping for intelligent responses to climate change from the world’s governments is an exercise in futility. It’s just not going to happen in time.

But my disappointment in government leaders in the U.S. and elsewhere is matched by my admiration for a new influential group of Americans, whom I call lifestyle leaders—for they are taking matters into their own hands, such as through building gardens, weatherizing their homes, getting rid of their cars, moving off-grid, bartering with neighbors and joining Community Supported Agriculture (CSA) programs.

Believing this group may hold the key to the rapid dissemination of low-energy lifestyles among the general public, I conducted an online survey on two sustainability-oriented listservs in late 2009 of 2,005 of those who have made changes to their lifestyles in response to climate change, peak oil and other environmental threats.

What have these early adopters done in response to these threats? More than two-thirds of survey takers said they cut purchases, bought more local goods and services, conserved energy in their homes and put in a garden. One-sixth have started new careers, such as a truck driver who became a permaculture teacher.

And these early adopters are reaching out to others. Nine out of ten are helping others to make similar changes, mostly by talking to people and modeling sustainable behaviors. Take the case of a 40-year-old man from Pennsylvania, who helps his neighbors grow their own food. “Our goal is to produce an example of what suburbanites must do to survive the collapse of our current system,” he wrote.

What were the hardest changes to make? Driving less and changing their diet, both a product of bad habits. “Not jumping into a car every time I turned around,” was how one respondent, a 52-year old man from rural Wisconsin, explained it.

Other barriers to effective action were cost, especially financing expensive home retrofits and renewable energy systems, lack of support from one’s family, especially when it comes to diet change, and lack of community and societal support, particularly when local food products and mass transit services were not available.

Understanding these barriers is critical—for if these exceptionally motivated individuals are held back, we can assume other people will have similar difficulties. These findings may help us all to learn what to expect.

The good news is that it hasn’t been all hard times for these lifestyle leaders. Many changes have made their lives better, like adopting a low-energy and local diet, gardening (which was frequently described as “fun”) and walking and bicycling more. More than three-quarters of respondents reported greater happiness satisfaction or personal growth since embracing new ways of living.

Those lifestyle change leaders making the more significant reductions in fossil fuel use are pioneering a new way to live on this planet that everyone will eventually have to adopt to preserve climate stability and survive the end of the fossil fuel age. Some survey findings that may help those working to accelerate awareness and action among the general public are:

Instead of waiting for the results of the next climate change summit in Mexico, why not get to work as individuals and communities? Ultimately whether we meet carbon dioxide reduction targets or not comes down to what we do, or not do, as energy consumers.

As a 59-year-old rural Kentucky man said in the survey, “Though I don’t have much faith that we as a nation, or world, are willing to make the needed changes, I believe we must work toward those changes…The only true way to fail is to not try.”