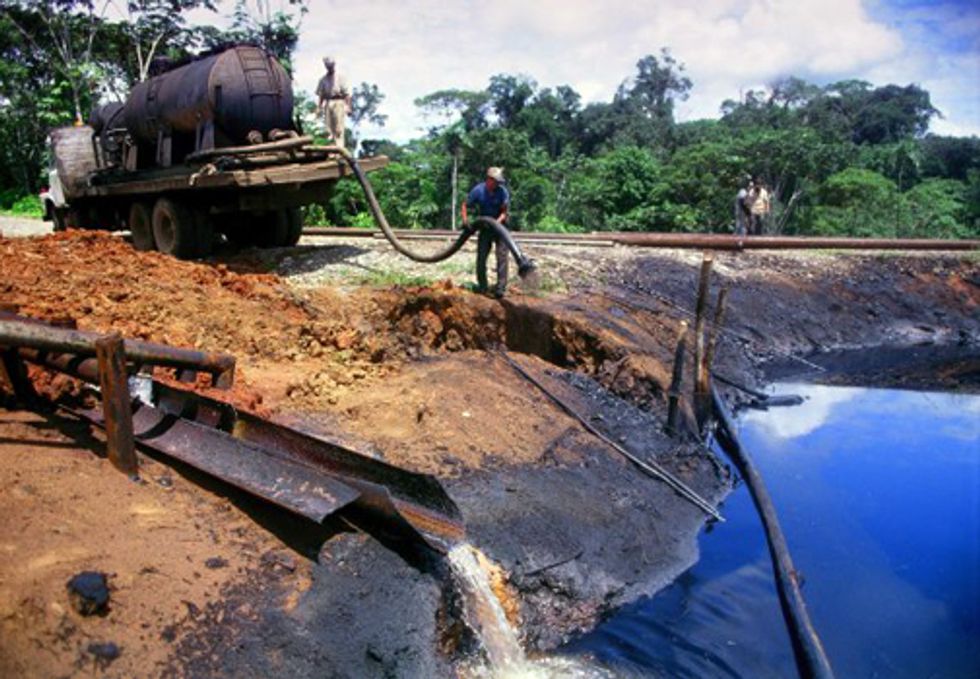 At a press conference on May 29, labor and community leaders from Brazil, Ecuador, Nigeria, Angola, California and Texas revealed the true cost of Chevron’s operations in the places where they live.

They will take their message to Chevron’s annual shareholder meeting today, where they will make clear that those paying the price for Chevron’s profits will no longer tolerate or subsidize its bad corporate citizenship and negligent, risky and dangerous operations.

“Tomorrow, I join with the United Steelworkers to call on Chevron to increase the safety of its oil rigs and refineries the world-over and to tell Chevron that its outrageous neglect for local communities and the environment from Brazil to Ecuador, from Nigeria to California, will not go unanswered,” said João Antonio de Moraes, national coordinator of Brazil’s largest oil workers union, the United Federation of Oil Workers (FUP).

The FUP filed suit in March demanding the cancellation of all of Chevron’s oil and gas contracts in Brazil in the wake of the companies offshore oil spills there.

"After 18 years, we won a historic legal victory against Chevron, but it doesn't want to accept responsibility for the environmental crimes caused in our lands," said Robinson Yumbo, president of the National Indigenous Federation of the Cofan Tribe, Ecuador. "The Cofan people, just like thousands of others, have suffered so much at the hands of Chevron. I plan to inform the company that all of the human pain they have caused will soon turn into financial pain for the company."

"Chevron’s legal problems are on the rise and with them investors are being exposed to greater financial risk,” said Ginger Cassady of Rainforest Action Network. “Last week, Institutional Shareholders and Glass Lewis announced their support for a resolution calling for a separation of Watson's role as board chairperson and CEO. The impetus for the resolution was due to Watson's mishandling of the Ecuador oil contamination case.”

Chevron’s AGM takes place under a darkening cloud of mounting pressure from governments, shareholders, global labor and community leaders and the increasingly organized 99%. Joining a historic season of revolt at shareholder meetings across the country, representatives from Brazil, Ecuador, Nigeria, Angola, Richmond and more will attend the AGM and participate in a shareholder revolt, presenting seven critical resolutions. Outside, the 99% Power Coalition, MoveOn, Occupy, United Steelworkers, 350.org and local community organizations will hold a colorful, creative and conspicuous protest.

"Chevron is killing people for profit," said Cristóvão Luemba, Rádio Ecclesia correspondent, Cabinda, Angola. "Chevron's constant offshore oil spills have decimated fisheries and compromised the livelihoods and subsistence of coastal communities. Its constant acts of impunity are supported by an authoritarian regime that cares more about oil revenues than the lives of its people."

“On January 16, the world stood still for the people of Nigeria’s Bayelsa state when a giant explosion came from Chevron’s Apoi North Gas Wellhead, killing two workers,” said Emem Okon, of the Kebetkache Women Development & Resource Centre in Nigeria. “The fires burned for months and the evidence of Chevron’s destruction still floats on the waters and the people have yet to recover.”

“Chevron’s Richmond Refinery is the largest industrial greenhouse gas emitter in California and the largest source of CO2 and criteria air pollutant emissions in Richmond,” said Nile Malloy of Communities for a Better Environment of Oakland, California. “Will Chevron commit to support policies that protect community health and our environment from increased and prolonged pollution caused by refining heavier, dirtier oil?”