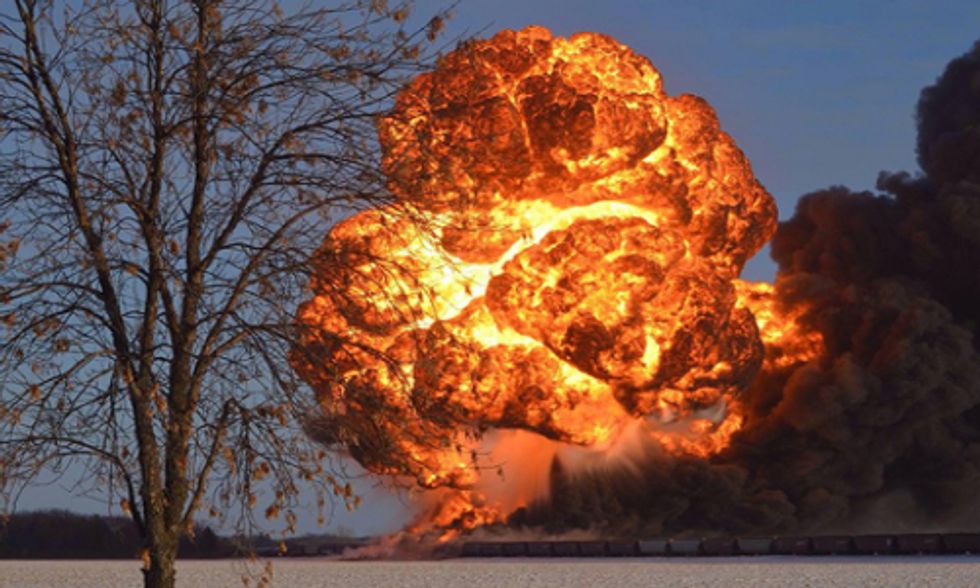 Earthjustice has filed a lawsuit on behalf of Sierra Club and ForestEthics, challenging the Department of Transportation's rejection of their July request for an immediate ban of DOT-111 rail tanker cars carrying volatile crude oil from the Bakken shale formation.

The National Transportation Safety Board (NTSB) called in 2012 for an immediate ban for these tankers, which are prone to puncture in the case of accidents, crashes and rollovers, causing explosions and fires. Two-thirds of the rail cars carrying crude oil through the U.S. are DOT-111s. The industry has insisted that discontinuing their use or phasing them out rapidly would be too costly, asking for four years to phase out the older cars and up to six years for the newer ones. This lawsuit challenges the Department of Transportation's assertion that they have responded sufficiently to the dangers posed by the cars.

The court filing said, "Petitioners ask the Court to set aside and remand the Secretary’s denial of the petition to ban shipping Bakken crude oil in unsafe tank cars because the Secretary failed to consider pertinent evidence and several relevant factors, including the Secretary’s past findings that the surge in crude-by-rail shipments of Bakken crude in dangerous tank cars poses imminent hazards and emergency unsafe conditions, the number of rail accidents and oil spills likely to occur during the time it will take to stop shipping Bakken crude in the most hazardous tank cars through rulemaking, Canada’s more expeditious phase out of the most hazardous tank cars and the safety hazards of allowing the industry to more than double the crude oil fleet before removing the most dangerous tank cars from crude-by-rail shipping."

"Most of the explosive crude oil on U.S. rails is moving in tanker cars that are almost guaranteed to fail in an accident," said Earthjustice attorney Patti Goldman. "The risks are too great to keep shipping explosive Bakken crude in defective DOT-111s. The NTSB called them unsafe two decades ago, and by the DOT’s own estimates, the U.S. could see 15 rail accidents every year involving these cars until we get them off the tracks.”

Referencing the accident in July 2013 that killed 47 people and leveled more than 30 buildings in the city's downtown, Goldman said, “We can’t afford to wait for another Lac-Mégantic, Quebec-type catastrophe to happen here.”

The train that exploded in Lac-Mégantic was carrying the flammable Bakken crude oil when its brake system disengaged in the middle of the night, sending 60 DOT-111 cars roaring at high speed into town, where they derailed and blew up near a popular nightspot, killing many of the patrons. That was only the most lethal of the many derailments and fires caused by unsafe rail cars carrying the flammable cargo, and their numbers have dramatically increased with the fracking boom. In 2008 just as the boom got underway, 9,500 carloads of oil moved over U.S. rails; in 2013 railroads carried more than 400,000 carloads of crude oil. More crude oil was spilled in rail accidents in 2013 than in the previous 38 years, when the government started collecting data on such spills.

“The oil industry wants to double the number of tanker cars moving crude oil on U.S. tracks before removing any of these antiquated cars," said Sierra Club attorney Devorah Ancel. "And the Department of Transportation is playing along, allowing industry up to six years to get these cars off the tracks. That’s too long to wait for a recall of these dangerous tank cars.”

With the DOT slow to act, many communities through which the trains pass are acting on their own, with communities on the west coast particularly aggressive in seeking to protect themselves through litigation.

This map shows where derailments, explosions and fires have occurred since 2012 (in red), and the communities seeking to protect themselves against the bomb trains (in green). Image credit: Earthjustice

“More than 25 million Americans live within a mile of a railroad track that could be hauling explosive crude oil, and towns and emergency responders across the country are calling for action," said Matt Krogh, ForestEthics extreme oil campaign director. "The administration’s draft regulations are too little and far too late. We are challenging the administration to ensure that the oil industry, railroads, and the federal government do not wait to take these dangerous tanker cars off the rails.”