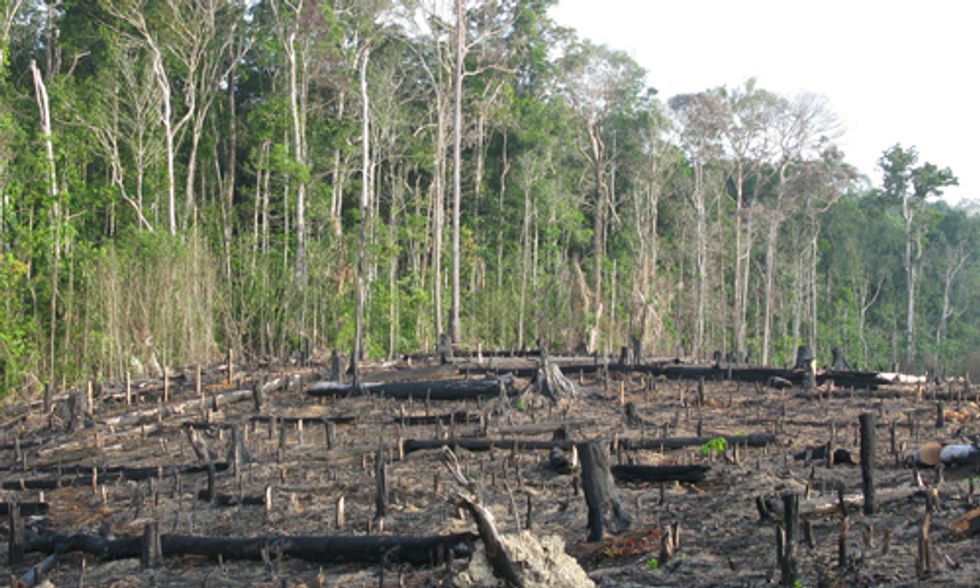 Information contained in a new report that details how multi-national corporations are destroying the environment and causing serious climate damage in Latin America brings attention to an important area not being discussed at the UN COP 20 climate negotiations being held in Peru.

The report describes in detail how the destruction caused by three European multi-national corporations is typical of the damage caused by multi-nationals throughout the continent.

Corporations in Latin America continue their activities “at the cost of devastation of indigenous communities and their cultures, as well as the destruction of forests, biodiversity and water resources." Photo credit:
Photo credit: Shutterstock

“Multinational corporations are relentlessly expanding their operations into ever more vulnerable and remote regions of the world,” says the report, written by three public interest groups: The Democracy Center of San Francisco, Corporate Europe Observatory of Brussels and Transnational Institute of Amsterdam.

Accused in the report are Repsol, the Spanish fossil fuels giant; the Swiss-based mining and resources conglomerate Glencore-Xstata; and Enel-Endesa, an Italian consortium:

The results in Latin America of such poor corporate behavior are environmental damage, overuse of water resources, increasingly high levels of carbon emissions and often hardship for indigenous communities.

What is not being considered in the COP 20 talks is that most developing world governments are not capable of forcing corporations to be more respectful of the environment and climate. Moreover, back in Europe, corporations are not held accountable for what they do in developing countries.

The Latin Americans lose in three ways: their climate and environment are severely damaged, they have to pay for their carbon surpluses, and practically all the profits from intrusive mega-projects go back to rich developed countries.

This irresponsible corporate behavior is further reason for northern countries to agree to commit billions of dollars to the Special Climate Change Fund, which is intended to compensate Southern countries for damaged done by the North.

With profits down at many Northern corporations since the 2011 recession, they are “invading” every country in Latin America.

In particular Spanish corporations have become so well known for their numerous and ambitious development projects in Latin America that they are often called the “Corporate Conquistadors,” a reference to the way the Spanish conquered much of Latin America centuries ago in search of gold, silver and cheap labor.

Repsol–one of the largest of the many Spanish companies–is criticized for extracting natural gas from the middle of Peru’s delicate rainforest, using dozens of drilling platforms, hundreds of kilometers of pipelines, and the construction of a recovery plant, and roads, etc.

The report says that Repsol will be expanding further “at the cost of devastation of indigenous communities and their cultures, as well as the destruction of forests, biodiversity and water resources ...”

In another part of Peru, the southern Andes, the mining activities of Glencore Xstrata is putting “extreme pressure” on the water supply, says the report. The lives of indigenous communities are closely tied to one hundred lakes and four river basins.

The lives of the indigenous peoples in Latin America are on the line, while corporate contamination goes unchecked. Photo credit: Common Dreams

In 2009, dangerous levels of contamination led to miscarriages, deformations and death in livestock in the area. Independent studies showed the company had polluted the water supply with heavy metals such as arsenic. Harsh and sometimes violent confrontations have taken place, but still local citizens are at risk.

The report explains that powerful, wealthy multi-national corporations manage to overcome resistance to their damaging environmental practices by infiltrating a country’s political process, making promises that are never met, or by simply ignoring local opposition.

At COP 20 in Lima on December 4, indigenous people from different parts of the world made a strong appeal for UN leaders and national governments about the damage suffered by their communities.

“Due to global warming, our people are suffering a constant variation of the climate,” said Klaus Quicque Bolivar, who lives in the Peruvian Amazon. “There is an excess of heat. The rivers are warming up; there are less agricultural production and natural reproduction of fishes. Some animal species are disappearing and the cycle of wild fruits are varying.”

But many indigenous participants at COP 20 have expressed concerns about whether their views will be included in the final document.

While the indigenous community had its say during a brief session, delegates from the multi-national corporate sector are getting much more attention and have been busy lobbying national government delegates at the conference to adopt industry-friendly solutions to fight climate change.

If the outcome of this UN climate conference is anything like others held in recent years, the recommendations of the indigenous community will receive only token acknowledgement in the final communique—an outcome that is sure to remind them of what it’s like to fight powerful corporations back in their own countries.

The COP 20 will conclude December 12. Participating countries hope to be able to produce a final document of agreements that will be the basis for a final accord to be signed in Paris a year from now.

Nick Fillmore is a Toronto freelance journalist and blogger who worked as an investigative journalist, documentary maker and producer for the CBC for nearly 30 years. He likes to hear from folks: [email protected]