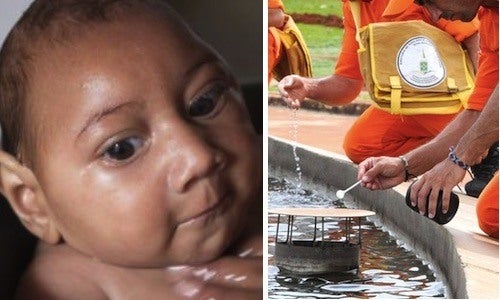 [Update: Rio Grande do Sul, Brazil’s southernmost state, suspended the use of the pyriproxyfen—a pesticide that stops the development of mosquito larvae in drinking tanks—to combat the spread of the Zika virus. Read more here.]

As the Zika epidemic “spreads explosively” around the world, pregnant travelers have been put on pause due to the virus’s suspected association with microcephaly, the congenital condition in which a baby’s head is abnormally small.

While the link between the mosquito-borne virus and microcephaly has yet to be scientifically proven, Argentinian and Brazilian doctors have suggested an alternate culprit: pesticides.

Proving whether #Zika is linked to birth defects could take years https://t.co/juBUkVp3zp pic.twitter.com/VY7XypjQug

The report, written by the Argentine group Physicians in the Crop-Sprayed Towns (PCST), suspects that pyriproxyfen—a larvicide added to drinking water to stop the development of mosquito larvae in drinking water tanks—has caused the birth defects.

The authors said that the pesticide, known by its commercial name SumiLarv, is manufactured by Sumitomo Chemical, a Japanese subsidiary of Monsanto.

According to PCST, in 2014, the Brazilian Ministry of Health introduced pyriproxyfen to drinking-water reservoirs in the state of Pernambuco, where the proliferation of the Zika-carrying Aedes aegypti mosquito is very high.

“Malformations detected in thousands of children from pregnant women living in areas where the Brazilian state added pyriproxyfen to drinking water is not a coincidence, even though the Ministry of Health places a direct blame on Zika virus for this damage, while trying to ignore its responsibility and ruling out the hypothesis of direct and cumulative chemical damage caused by years of endocrine and immunological disruption of the a acted population,” PCST said.

Public health officials in Brazil inspect points of standing water, a breeding ground for the Zika-carrying Aedes mosquito. The virus has been linked to microcephaly, but the theory has not been scientifically confirmed. Photo credit: Flickr/Twitter

As it happens, the northeast state has registered the largest number of cases of microcephaly. Pernambuco, the first state to detect the problem, has roughly 35 percent of the total microcephaly cases across Brazil.

“Previous Zika epidemics did not cause birth defects in newborns, despite infecting 75 percent of the population in those countries,” the paper said. “Also, in other countries such as Colombia there are no records of microcephaly; however, there are plenty of Zika cases.”

Indeed, as The Ecologist observed from PCST’s report, Colombia has so far diagnosed 3,177 pregnant women with the Zika virus, but these women gave birth to healthy babies or are carrying healthy fetuses.

Sumitomo Chemical says on the Sumilarv website that the product “not only poses minimal risk to mammals, birds and fish; it also allows it to be applied to drinking water. Application to the aquatic breeding sites of mosquitoes ensures a rapid decline of the adult mosquito population significantly reducing bite rates.”