Latest Draft of COP21 Climate Agreement: A Slap in the Face 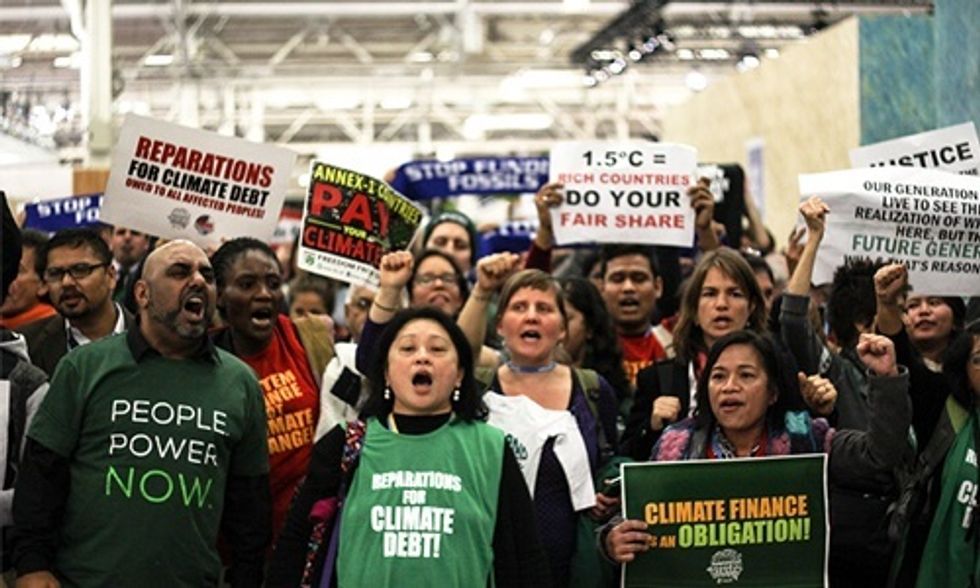 The latest version of the draft COP21 agreement that came out yesterday was a slap in the face of even the most pragmatic optimists. With most of the crucial elements now bracketed (i.e. uncertain), the agreement has been almost reduced to empty rhetoric and far from what is needed to prevent global temperature rise beyond the catastrophic 2 degree level, let alone 1.5 degrees.

“Offer of 1.5 as an inspiration is not what we are expecting,” says Azer Girmai of LDC Watch. “It will not become a tradeoff for our demands. We insist for developed countries to commit.”

The civil society has emerged strongly in putting pressure to the negotiators to address the needs of the people and not corporations. Photo credit: Joel Lukhovi / Survival Media Agency

The new draft presents two options for mitigation, a not very ambitious quantitative target and a qualitative target which would either be carbon neutrality or decarbonization—neither of which is very ambitious. There is also a bracketed goal for a very ambitious goal which is most likely to be rejected. However, these options will allow countries to keep emitting.

With regards to finance, the agreement is equally disappointing. While it says financial assistance would be provided to vulnerable countries, the options do not promise much and the key words and specifics are all bracketed. “This is a reflection of the resistance of developed country parties to describe finance that is in anyway meaningful,” says Lidy Nacpi, regional coordinator of WECAN.

Moreover, no new funding has been added to the table as of now, but rather, existing commitments have been rephrased and packaged in a new way, such as the much hyped about commitment by U.S. to provide $800 million in adaptation finance. “This is consistent with their pathway anyway, it is not additional money,” says Oscar Reis from the Institute of Policy Studies.

The purpose of the sit-in was aimed at putting pressure on Parties to not give up on a fair and ambitious agreement that was promised by Heads of State at the beginning of COP21 in Paris. Photo credit: Joel Lukhovi / Survival Media Agency

While there are lofty promises made on the adaptation section, they are not supported by the content in the finance section, making those promises virtually meaningless.

Furthermore, while loss and damage—adverse effects climate change that occur despite mitigation and adaptation efforts—has been included into the text, finance has not been dedicated for it.

“No level of mitigation is going to save the people dying now [due to climate change induced disasters],” says Girmal, stressing the need for adequate funding for adaptation and loss and damage.

The Intended Nationally Determined Contributions (INDCs)—i.e. the measurements countries have committed to take to combat climate change—that have been submitted so far, are much lower than what was expected and are not ambitious enough for the immediate cuts in emission needed to stay below the 1.5 degrees mark and the draft agreement is a reflection of the lack of ambition.

“We need to continue contributions from developed countries so they do their fair share and unlock the potential of developing countries doing more mitigation by providing them the support,” says Kelly Stone of Action Aid.

With the conference on its penultimate days, the text edited to give the agreement teeth. Ambition needs to be increased to substantially reduce emissions and dedicate adequate funds for adaptation and capacity building of vulnerable nations. The hopes and future of too many depend on COP21 for it to be a failure.