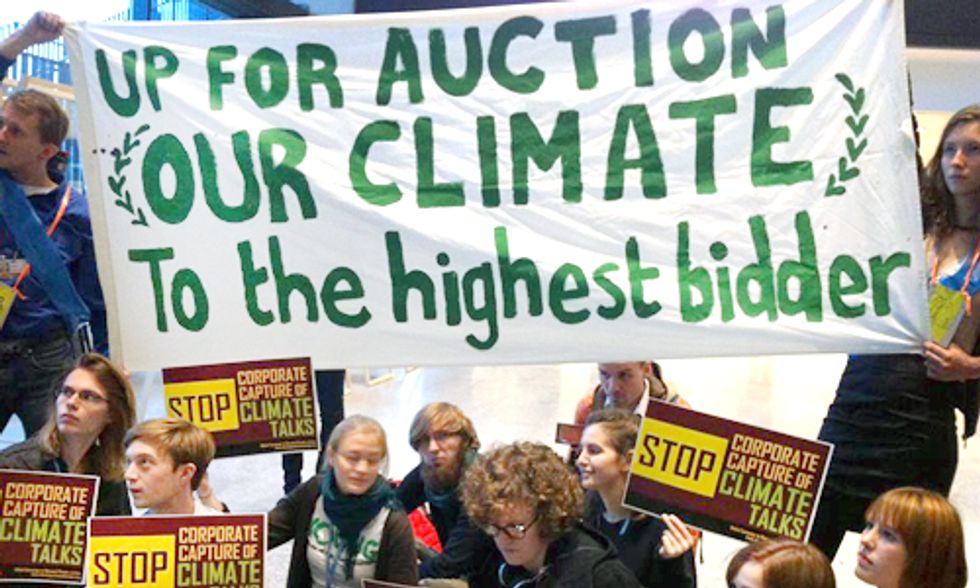 For the first time, all countries of the world have agreed to make contributions in cutting greenhouse gas emissions to prevent the planet’s temperature rising above the 2°C danger limit previously agreed by politicians.

Thirty hours after the climate conference in Warsaw should have ended, a series of compromises rescued the talks from collapse, although the deal fell far short of developing countries' original expectations.

The last stumbling block preventing agreement was overcome with an addition to the climate convention (UNFCCC), enabling the use of an existing mechanism to provide money from rich nations for loss and damage suffered by developing countries because of extreme climate events and long-term problems like rising sea levels. This would potentially allow the Philippines to apply for funds to help with the effects of this month’s super typhoon.

One concrete achievement was to finalize an agreement to conserve the world’s forests and to make it operational.

The Warsaw meeting was billed as a preparatory step to the 194 participating countries signing a legally binding agreement in Paris in 2015 to limit greenhouse gas emissions, and also as a vehicle for providing poorer countries with finance—both to adapt to climate change and also to deal with irreparable damage like loss of islands through sea level rise.

Previously only the rich industrial nations have agreed to make commitments to cut greenhouse gases, but emissions from developing countries have been rising so fast that without contributions from them there is no hope of preventing the atmosphere dangerously overheating.

Reluctance by India and other larger developing countries to make commitments to limit emissions was overcome by calling targets “contributions” and so avoiding making them appear legally binding.

An important part of the agreement is for all countries to come up with their national “contributions” by the spring of 2015. This will allow scientists to evaluate all the targets offered by countries to see if this will keep world temperatures below a 2°C rise.

If they are not sufficient, then the less ambitious countries will be encouraged to improve their contributions in time for the Paris conference in December that year.

Jennifer Morgan, from the World Resources Institute, said: “Just in the nick of time, the negotiators in Warsaw delivered enough to keep the process moving.

“Country representatives now need to return home to make significant progress on their work plans and national offers that can become the backbone of a new climate agreement. Progress will also depend on mobilizing more financial support for vulnerable countries."

A statement by the Third World Network, an organization helping developing nations, said the agreement meant that all countries needed to discuss their contributions towards the ultimate objective of the convention, which was “truly to avoid dangerous climate change.”

Meena Raman from the Climate Network said the negotiations next year would have to grapple with the emission budget required and how to share it fairly. This would need to take into account   the historic contributions to climate change of developed countries.

China, now the world’s largest contributor to greenhouse gases, acknowledged here that developing countries’ emissions now exceeded those of the developed countries and needed to be limited.

Agreements on finance were fudged. At the conference $110 million was promised, mostly by EU countries, to help developing countries adapt to climate change.

Attempts to get a much larger sum of $70 billion from the developed world by 2016 were blocked by the United States. Instead, a pledge to provide $100 billion a year from 2020, which had been promised at previous climate talks, remained on the table, although as yet which countries are going to provide this money remains unstated.

One outstanding success of the conference was the agreement designed to reward countries that prevent the destruction of their forests.

Tree loss is estimated to increase man-made emissions of carbon dioxide to the atmosphere by 12% a year.  It has long been the concern of developed countries to find a way of preventing tropical forests being cut down, but it has taken 20 years to create an international agreement on how to do it.

The agreement called REDD (Reducing Emissions from Deforestation and Degradation) provides compensation for countries that lose revenue from not exploiting their forests. Countries that have satellite monitoring and can show they protect the rights of forest peoples and biological diversity can now claim from climate funds for carbon emissions avoided.

Some less developed countries still do not have adequate verification schemes in place, but key states like Brazil, where the Amazon losses are carefully monitored, should benefit from REDD immediately, provided they can reduce forest loss.