Pebble Mine Threatens One of the Last Great Salmon Rivers 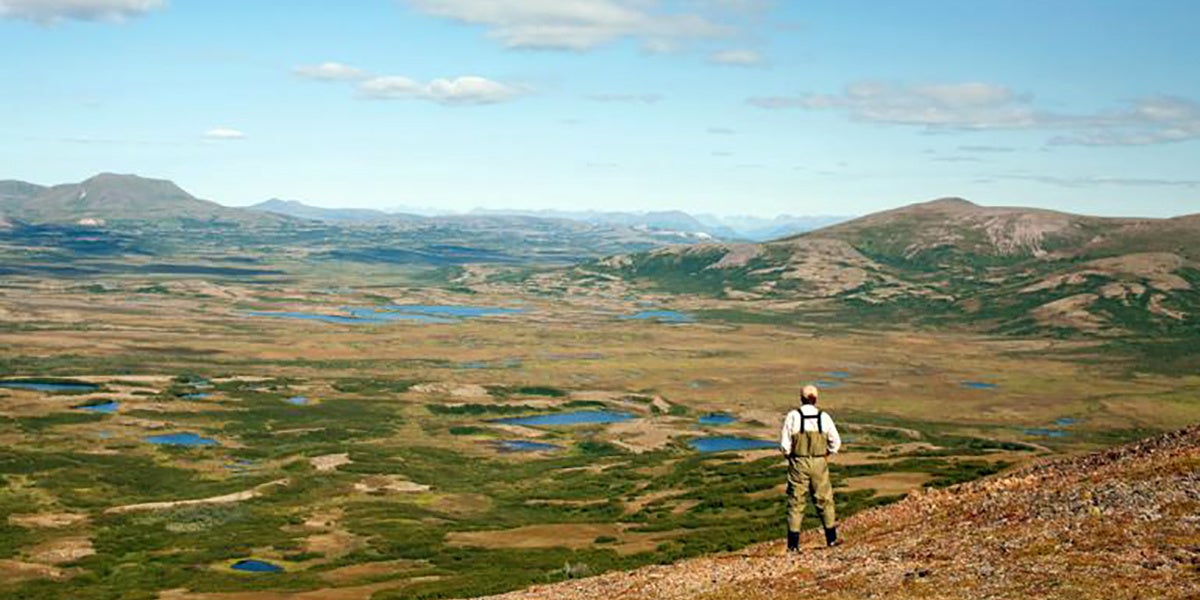 Since 2004, Alaska Natives, fishing councils and locals in the town of Dillingham have formed a rare alignment against a proposed gold mine near Bristol Bay and the headwaters of two of the last great salmon rivers on Earth.

If Pebble Mine were to proceed, Northern Dynasty Minerals, a Canadian company, would detonate thousands of tons of explosives in this mossy tundra to create a nearly 4,000-acre open-pit gold and copper mine along the braided waterways and lagoons feeding Bristol Bay. A tailings pond would contain enough slurry laced with sulfuric acid to cover Iceland. The sole barrier protecting the nearly 60 million salmon spawning annually in the bay from the toxic water would be an earthen dam. If the dam failed—the area is located in one of the most active earthquake zones in North America—marine mammals, fish and dozens of species of birds, along with a booming fisheries economy worth upwards of half a billion dollars, could be devastated.

That was the conclusion of a 2014 peer-reviewed study carried out by the EPA, which found that Pebble would do “irreversible” damage to the watershed and that there would be “complete loss of fish habitat due to elimination, dewatering, and fragmentation of streams, wetlands, and other aquatic resources.” To underline its findings, the EPA invoked a rarely used provision of the Clean Water Act, with the aim of permanently imposing restrictions on the site.

After the study’s release, Northern Dynasty stock prices plummeted. Investors, including three of the world’s largest mining companies, pulled out. To all involved, it appeared that the mother lode of gold and copper would remain beneath the bogs and mossy hummocks of the bay.

Then Donald Trump was elected president.

On May 1, 2017, Tom Collier, CEO of the mining operation Pebble Limited Partnership, and EPA administrator Scott Pruitt sat down together for breakfast. Less than an hour later they had a deal. An email was sent alerting EPA officials that the agency had settled an ongoing lawsuit with Pebble, clearing the way for the mine to move forward.

In the three-month comment period that ensued, more than 25,000 Alaskans filed complaints protesting Pebble Mine. “We were hopeful during the Obama administration that the federal government would listen to the voice of the people and the hard science of their agencies,” said Alannah Hurley, the executive director of the United Tribes of Bristol Bay, a consortium of tribal governments. For thousands of years, the tribes have relied on the annual harvest of sockeye for sustenance. “With the election of Trump, it has been very frustrating.”

The proposed mine has united conservationists, commercial and sport fishers, and Alaska Native nations—groups more accustomed to fighting with one another over salmon resources. They have joined together for letter-writing campaigns, youth-empowerment events, and community organizing in an effort to push back against the mine. “We realized early on that if this mine happens, there won’t be any allocations left to fight over,” Hurley said.

Tim Bristol, director of Salmon State, which works to protect salmon habitat around Alaska, says that the alignment of disparate interests is nearly unprecedented. “It took something as big and awful as Pebble to bring us all under one roof.”

Pebble Limited Partnership’s marketing material says that its project will create 1,000 jobs and that it is possible to build the mine “in harmony with the environment” and with “minimal impact” on Bristol Bay, economic or otherwise. In response, conservation groups point to the 14,000 jobs created by tourism and the fisheries, contributing $1.5 billion dollars to the economy each year—jobs that the mine would endanger by eradicating 90 miles of salmon streams and possibly leaching toxins from the tailings pond.

The possibility of a catastrophic breach is real. In August 2014, despite repeated reassurances from the Canadian company Imperial Metals that such a thing could never happen, the tailings pond of Mount Polley, a smaller copper and gold mine in British Columbia, failed. An estimated 1.3 billion gallons of toxic water flooded Quesnel Lake, contaminating the Xat’sull First Nation salmon harvest—a 1,000-year-old tradition—along with local drinking water.

“That woke up a lot of folks,” said Verner Wilson, who grew up fishing in Dillingham. “Even conservatives who said Pebble Mine wouldn’t be so bad.”

Karl Jordan, a third-generation salmon fisherman who cut his teeth working in Bristol Bay, said Pebble is a nonstarter. “If we can’t stop a mine here in Bristol, one of the last remaining salmon fisheries, we can’t stop one anywhere.” Even Alaska’s late Republican Sen. Ted Stevens, a staunch supporter of mines, once called Pebble “the wrong mine in the wrong place.”

In December, Northern Dynasty announced a partnership with the Canadian mining company First Quantum Minerals, a move that ensures financial support for the mine through the expensive permitting phase. A few days later, Northern Dynasty filed for a permit with the U.S. Army Corps of Engineers, which initiated a full review of the project in anticipation of publishing an environmental impact statement. Then, in a head-spinning move, the EPA announced in January that it would not suspend the environmental protections for Bristol Bay, making the permitting process more uncertain. Northern Dynasty insists its plans are still on track. The EPA continues to solicit public comment.

“We can talk all day about why this doesn’t make sense economically,” Hurley said. “And yes, I agree. But for us, this is a spiritual fight. A fight for our home and for everything that makes us who we are, that made our ancestors who they were. For us, this is a human rights issue. For our people, that’s what this is all about.”