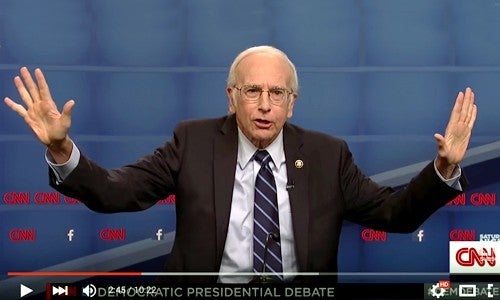 Last night’s opening skit of Saturday Night Live on the reenactment of the Democratic debate was glorious. With Larry David as Bernie Sanders, Alec Baldwin as Jim Webb, Kate McKinnon as Hillary Clinton, Kyle Mooney as Lincoln Chafee, Taran Killam as Martin O’Malley and hosted by Jon Rudnitsky as CNN’s Anderson Cooper, it couldn’t have been better.

“Hello, Hello, Hello … Enough with the hellos, let’s do this,” exclaimed David in his opening remarks as Sanders. “I’m good. I’m hungry, but I’m good. And now, if you don’t mind, I’m going to dial it right up to a 10!”

“We’re doomed. We need a revolution. Millions of people on the streets. And we got to do something and we got to do it now,” David said, perfectly imitating Sanders.

“I don’t have a Super PAC, I don’t even have a backpack,” exclaimed David. “I carry my stuff around loose in my arms like a professor, you know between classes. I own one pair of underwear. That’s it! Some of these billionaires, they have three, four pairs. And I don’t have a dryer! I have to put my clothes on the radiator. So who do you want as president? One of these Washington insiders, or a guy who has one pair of clean underwear that he dries on a radiator?”