Largest Desalination Plant in Western Hemisphere Opens: Will It Fix the Drought? 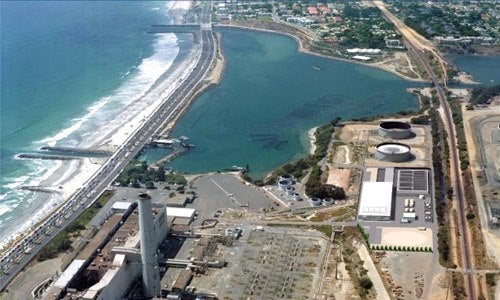 The largest desalination plant in the Western Hemisphere, which we featured on EcoWatch earlier this year, officially opened Monday. If the Carlsbad, California plant performs as expected, desalination could play a much larger role in addressing the four-year drought plaguing the state. About 15 other desalination plants are being proposed in California.

“We’ve now established a model, not just for San Diego County but for other plants up and down the coastline, so that we can make sure California’s future is bright and that we have the water we need,” Assembly Speaker Toni Atkins (D-San Diego) told the New York Times.

Poseidon Water, the builders of the $1 billion plant, said it can produce up to 50 million gallons of fresh water a day, which amounts to about 10 percent of the county’s total water use. The company has plans for another plant about 60 miles north of Carlsbad in Huntington Beach.

Desalination is a contentious issue, though. Researchers at MIT have developed a small-scale solar-powered desalination machine that has been hailed as a potential solution for drought-stricken communities. But critics, citing marine impacts and its high cost, say desalination isn’t a good solution and can’t fix the drought. Various environmental groups, including the Surfrider Foundation, opposed the plant in Carlsbad.

The ocean conservation group wrote in a blog post:

Instead of providing multiple benefits (like conservation, stormwater capture and water recycling would), unfortunately the Carlsbad desalination plant as approved causes multiple impacts (marine life mortality, brine discharge, and more energy consumption and GHG generation than importing water from the Bay Delta to Southern California). Surfrider is currently working to improve regulations for desalination through the statewide desalination policy from the State Water Resources Control Board, which is expected early next year.

Unfortunately, the Carlsbad desalination plant is being built to rely on an ocean-water-intake that is currently being phased out of use for power plants. It seems like a huge step backwards for a new industry to step in and continue the destruction to our already threatened marine ecosystems.

For more on the new plant, listen to NPR’s Here and Now segment: