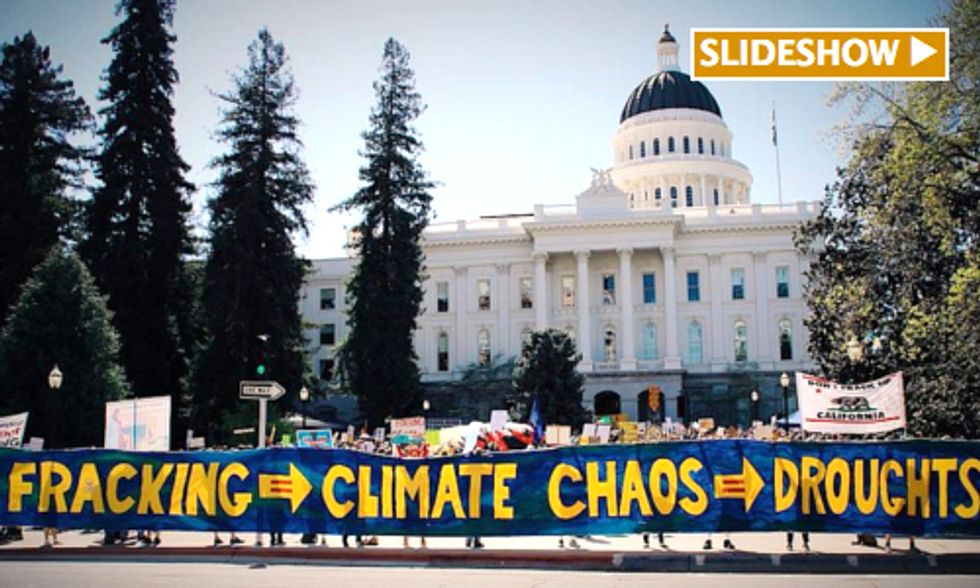 They came in their thousands from across the Golden State. On Saturday, the largest anti-fracking rally and protest in California’s history took place in the state capital of Sacramento.

The rally, which was organized by Californians Against Fracking and some 80 environmental and health organizations, such as Oil Change International (OCI) and 350.org.

Protestors were young and old, united in their opposition to fracking. One group of grandmothers sang: “We don’t want your fracking turning all our water brown, Take your freakin’ frackin’ drills or we will shut you down! Hydro-FRAC-turing just sucks.”

“Governor Brown has positioned himself as a climate champion, and we want to make it clear that as he decides whether to green light a massive expansion of fracking in California, his legacy is on the line,” said rally organizer Zack Malitz.

David Turnbull, campaigns director at OCI warned Gov. Brown he would be “foolish to ignore,” the growing movement against fracking in the State. “The Governor can choose to stand with these concerned Californians and stop fracking in our state, or he can continue to stand with Big Oil,” Turnbull said.

Two days previously environmental groups had released a report warning that oil companies are increasing California’s earthquake risk by fracking, which is especially pertinent given the active fault lines of California.

The report concluded that a boom in fracking in California would worsen the danger of earthquakes, by greatly increasing oil wastewater production and underground injection. Extracting the Monterey Shale’s oil in the state could produce almost 9 trillion gallons of contaminated wastewater, the report estimates. That could expose California to a surge in damaging earthquakes like those seen in other states. (Last week I blogged about how one frack well in Ohio has been suspended due to small quakes.)

“This isn’t rocket science,” said one of the report’s authors, Jhon Arbelaez from EarthWorks. “We’ve known for decades that wastewater injection increases earthquake risk. Since Gov. Brown resolutely refuses to learn from other communities’ experience with fracking across the country, our only option to protect California families is to prevent fracking altogether.”

And that certainly was the message at Saturday’s rally.

“People need to know what fracking looks like,” said Rodrigo Romo, one activist from the heavily fracked region of Shafter, CA. “In the Central Valley there is no buffer between fracking sites and our community; there are wells next-door to schools and agricultural land. It is time for our decision makers to listen to us and stop fracking.”