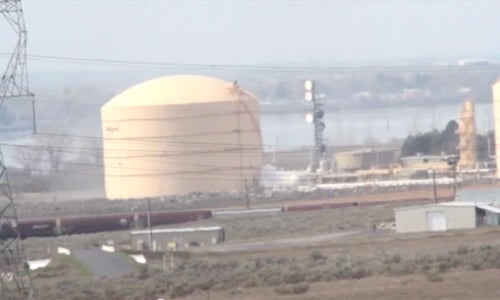 Nearly 1,000 area residents and agricultural workers were displaced Monday following a liquefied natural gas (LNG) explosion at a plant near the Washington-Oregon border.

According to the Tri-City Herald, hazardous materials experts believe the Monday morning explosion at Northwest Pipeline caused the slow leak of cold LNG from a 14.6-million-gallon storage tank that was struck by shrapnel. While a statement from Williams Partners, owner of the Plymouth, WA plant, states that the majority of the evacuees were allow to return to their homes by 8 p.m. Pacific Standard Time, the Herald‘s report indicates that officials have yet to end the evacuation.

Highway and rail line traffic also was shut down near the Columbia River. 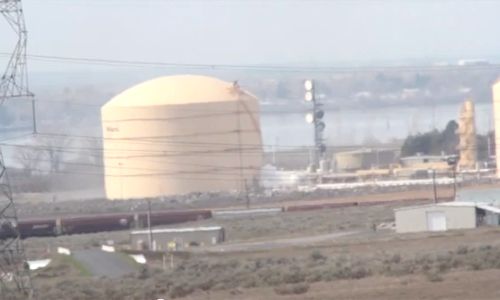 Nearly 1,000 area residents and employees were evacuated Monday after a natural gas explosion took place at a Plymouth, WA plant. Video screenshot: Tri-City Herald.
Capt. Jeff Ripley of the area’s fire district said the natural gas vapors could have exploded if they were mixed with the right amount of oxygen, atmosphere and an ignition source. That sort of explosion would pack the power kill anybody within a radius of up to three-quarters of a mile. The gas is stored at negative 260 degrees.
Hazardous material experts have been assessing information gathered by a Washington State Patrol robot and helicopter that were sent into the plant Monday afternoon. The cause has yet to be determined.

“We believe that only natural gas was released and it evaporated into the atmosphere,” Williams Partners said earlier in the day. “There is no hazardous vapor drifting toward residents in the area. The tanks involved were about one-third full of liquefied natural gas.

“Once it is safe to return to the plant, we will begin a thorough investigation into the cause of the incident.”

The Washington Utilities and Transportation Commission will also investigate the incident. The Commission last evaluated the facility in November—a “clean inspection,” according to David Lykken, the commission’s director of pipeline safety, who said there were no violations.

According to The Associated Press, the facility provides supplemental gas when demand rises for a 4,000-mile pipeline that extends from the Canadian border to southern Utah.

Just last week, an LNG terminal at Coos Bay, OR received federal approval. The terminal would be supplied by the proposed 235-mile-long Pacific Connector pipeline, crossing public and private land in southern Oregon to connect to existing pipelines from British Columbia to California.