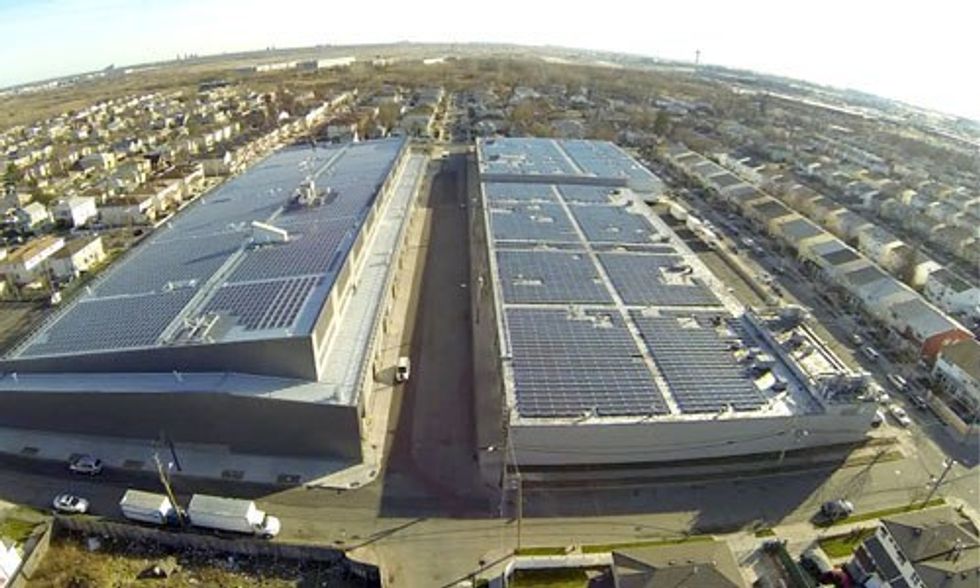 Solar is having another banner year. While 2014 already smashed records, it looks like 2015 is poised for even greater growth. Last week, a report from GTM Research and the Solar Energy Industries Association revealed that the U.S. generates enough electricity from solar to power 4.6 million homes.

“This marquis solar initiative is a tangible demonstration of the power of partnership,” said Peyton Boswell, managing director at EnterSolar. “While Manhattan often presents challenges for solar energy, we are proud to be partnering with Bloomberg, one of the world’s most recognizable brands based here in New York, on this renewable energy project.”

The project sets a number of precedents. It's the largest remote net metered project in New York City, and it's also the first to use remote net metering to power a midtown Manhattan skyscraper with a remotely-sited solar PV system. Remote Net Metering (RNM), "allows sites with poor solar characteristics but significant onsite load to benefit from solar systems installed on an alternative site with excellent solar characteristics," explains EnterSolar. In this case, JFK Airport Park has installed a 1,500 kilowatt solar installation across three adjacent logistics facilities in Springfield Gardens, Queens.

On an annual basis, the project will generate 1.8 million kilowatt hours, enough electricity to power more than 244 typical homes for a year. The project is also responsible for the avoidance of almost 1.1 million pounds of CO2 emissions per year.

"We are always looking for new and innovative ways to operate more efficiently. This project makes good business sense," said Curtis Ravenel, global head of Sustainable Business and Finance at Bloomberg. “It enables us to diversify our energy supply, reduce costs and help contribute to a cleaner, healthier New York City. The Remote Net Metering program made this possible and we plan to do more renewable energy projects like this that bring business value and benefits—including economic development and jobs—to the communities where we operate.”

RNM allows solar to be installed in more places than ever "while promoting the optimal siting of such projects with regards to the electrical transmission system," says EnterSolar. The project was supported in part by Gov. Cuomo’s NY-Sun $1 billion initiative to "advance the scale-up of solar and move New York State closer to having a sustainable, self-sufficient solar industry." And by all measures, the initiative has been wildly successful. The growth of solar in the state has increased more than 300 percent from 2011 to 2014, twice the rate of U.S. solar growth overall, according to EnterSolar.

“Under Governor Cuomo’s Reforming the Energy Vision, New York State continues its strong commitment to the growth of the solar industry as it scales up the adoption of this clean, renewable resource,” said John B. Rhodes, president and CEO of the New York State Energy Research and Development Authority. “This project is an excellent example of the use of remote net metering to offset electricity costs at a major facility that would not otherwise be able to benefit from solar.”