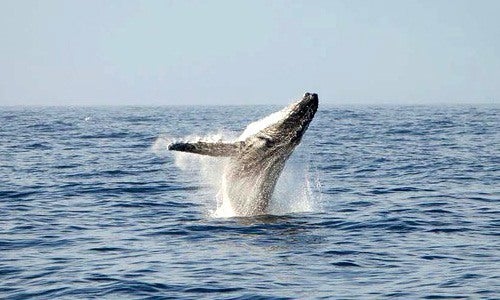 In a landmark ruling, the Australian Federal Court has found the Japanese whalers to be in contempt of court and fined them $1 million AUS for killing minke whales in the Southern Ocean’s Australian Whale Sanctuary, in violation of a 2008 injunction.

“This is a crucial turning point for Japan’s whaling program, which has long faced condemnation from nations around the world,” said Sea Shepherd founder Captain Paul Watson. “It is essential that we keep applying as much pressure as possible on Japan to end its barbaric and illegal killing of whales in the Southern Ocean—in the courts, through diplomatic channels, and in the court of public opinion.”

The Japanese whalers are also now facing claims filed by Sea Shepherd in the federal district court in Seattle. Sea Shepherd has asked the court to find that Japan’s Southern Ocean whaling program violates international law, and to impose an injunction to prevent it from continuing.

The court found the whalers to have been in contempt of that injunction during four whaling seasons between 2008 and 2014, and fined them $250,000 AUS for each season. The total fine of $1 million AUS (more than $700,000 in U.S. dollars) was levied against Kyodo Senpaku Kaisha, the company that conducts whaling operations under a permit from the Japanese government.

The Australian case against the whalers was brought by Humane Society International. A key element in its success was the eyewitness testimony of Peter Hammarstedt, who was captain of the Bob Barkerduring Operation Zero Tolerance, the 2013-2014 whale defense campaign conducted by Sea Shepherd Australia and Sea Shepherd Global. Captain Hammarstedt witnessed the slaughter of a protected minke whale by the Japanese whaling fleet inside the Australian Whale Sanctuary, just 60 nautical miles from the Australian managed Davis Base.

This ruling comes at a time when Japan is experiencing mounting political and legal pressure to end its whaling in the Southern Ocean. In March 2014, the International Court of Justice (ICJ) found that Japan’s previous whaling program violated international law. The ICJ ruled that Japan had failed to provide a legitimate scientific justification for its lethal whaling, and that it was thus in violation of the global moratorium on commercial whaling and the prohibition on commercial whaling in the Southern Ocean Whale Sanctuary. The ICJ held that Japan must revoke existing whaling permits and refrain from granting any more permits under that program.

In response to the ICJ decision, Japan suspended its Southern Ocean whale hunt during the 2014-2015 season. However, last fall, Japan introduced a new program that calls for the killing of 4,000 minke whales in the Southern Ocean over the next 12 years. The Scientific Committee of the International Whaling Commission (IWC) issued a report in June finding that Japan’s new program still failed to demonstrate any need to kill whales for scientific research.

The claims brought by Sea Shepherd ask the U.S. federal court to declare that that the Japanese whalers are violating international law by continuing to kill whales in the Southern Ocean, and that they have engaged in piracy through their illegal whaling and the violent actions that they have taken against Sea Shepherd to defend their unlawful activity.

“Japan has been found in contempt of the Australian Federal Court, its whaling has been declared unlawful by the International Court of Justice, and the International Whaling Commission has denied it permission to continue to kill whales in the Southern Ocean,” said Captain Watson. “There is no doubt that Japanese whaling is now a renegade pirate whaling operation that continues in contempt of the ICJ, the IWC, the Australian Federal Court and in the court of international public opinion.”

Japanese whalers have not officially announced whether they will send a whaling fleet to the Southern Ocean again this year. If Japan goes forward with its latest proposal, its whaling fleet could depart for the Southern Ocean as early as next month. Japan’s Ministry of Foreign Affairs said in October that a “decision has not yet been made” as to whether these plans will proceed.