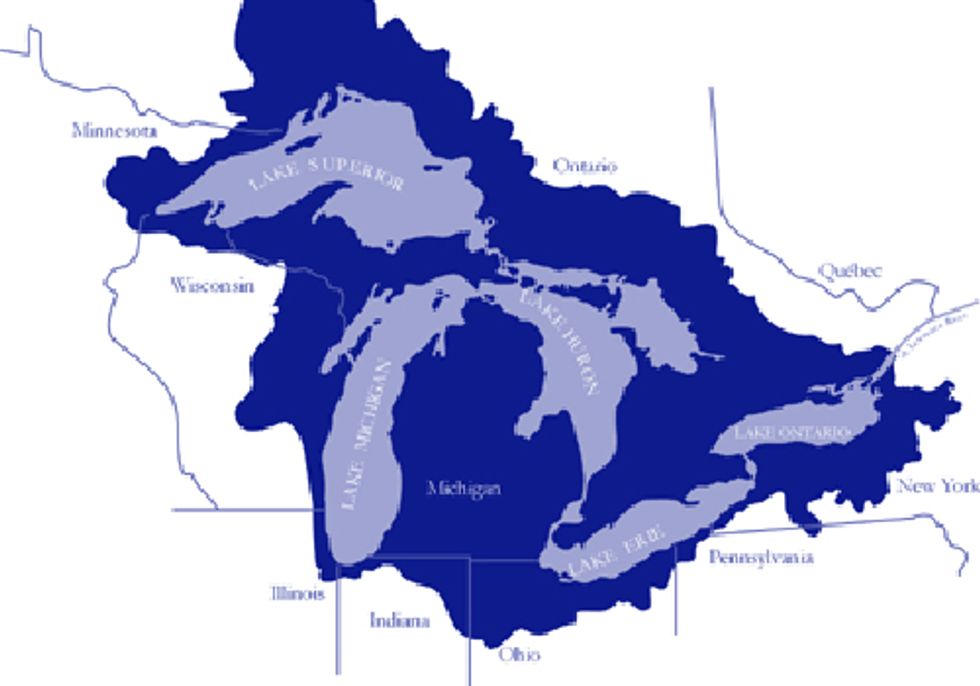 At today’s signing of the revised Great Lakes Water Quality Agreement in Washington, D.C., representatives from Great Lakes United and the National Wildlife Federation applauded the completion of the agreement but cautioned the U.S. and Canadian governments that the hard work of implementing the Agreement is just beginning.

“We are honored to attend today the signing of landmark revisions to the Great Lakes Water Quality Agreement, the U.S.-Canadian agreement that is so important to the health of the Great Lakes,” said John Jackson, interim executive director of Great Lakes United. “These revisions were eight years in the making. We hope they will lead to revitalized action from the governments and their partners working together bi-nationally across the entire Great Lakes-St. Lawrence River basin from Duluth to Québec City. Protection, cleanup and restoration are essential to ensure that we live in a vital, thriving Great Lakes basin. Today we applaud. Tomorrow we get to work.”

“If fully implemented, the agreement will benefit millions of people by restoring the health of the largest fresh water resource in the world,” said Andy Buchsbaum, director of the Great Lakes office of the National Wildlife Federation. “We are pleased to see that the governments have kept the focus of the Agreement on Great Lakes water quality. While the Agreement continues to focus on cleaning up pollution in the Great Lakes, the revisions are designed to address broader threats to water quality, including aquatic invasive species, climate change, habitat destruction and harmful substances that are not necessarily persistent toxic substances.”

The Agreement contains some targets for addressing these stresses. For example, it requires phosphorus reduction targets for Lake Erie within three years and action plans within five years. It sets a two-year deadline for the development and implementation of an early detection and rapid response system for aquatic invasive species. It does not include timelines for cleaning up Areas of Concern (toxic hotspots) or achieving virtual elimination of chemicals of concern.

Jackson said, “While we praise today the signing of this new Agreement, this is only the first step. No matter what the words on the page say, this Agreement will only be effective if the U.S. and Canadian governments act to implement it.”

“We know this from experience,” Buchsbaum said. “For example, when the governments enacted new laws and rules to implement the 1987 Amendments–as the U.S. Congress and the U.S. EPA and Environment Canada did to address persistent toxic substances in the Great Lakes–the Agreement helped bring the lakes back to health. But when the governments have failed to implement parts of the Agreement, the lakes suffer.”

U.S. and Canadian officials have stated in reports that the Great Lakes would be far better off today if the governments had more fully implemented the 1987 Agreement—the last time the Water Quality Agreement was updated.

“We ring this alarm bell with today’s revised Agreement,” Jackson said. “We call on the governments to ensure a more effective implementation of the Agreement they signed today.”

• Ensure that adequate resources are available to implement the Agreement. “Unfortunately, we are currently going the wrong direction on this matter,” Jackson said. “In the past year, the Canadian Government has moved swiftly towards its goal of eliminating hundreds of government scientist positions, even as they commit in the revised Agreement to science-based decision-making. Canada is planning to close down the major Canadian research station dedicated to freshwater experimentation that has been so important in deepening our understanding of problems and solutions.”

“On the U.S. side, there has been better news, but the future is worrisome,” Buchsbaum said. “We were pleased to see $475 million added to the Great Lakes budget in 2010 under the Great Lakes Restoration Initiative. But we now see budget fights that have reduced that budget to $300 million dollars annually. The federal fund to support sewage treatment upgrades (so important for the Great Lakes) has also been substantially cut. We fear what further cuts may come.”

• Strengthen and expand legislation and regulations as needed to protect the Great Lakes. In Canada, movement is in the opposite direction aimed at weakening legislation such as the Canadian Environmental Assessment Act and the Fisheries Act. In the U.S., Congressional efforts have been to gut the Clean Water Act protections that are the foundation of Great Lakes health.

• Involve the public to ensure progress and accountability. “We need opportunities for more complete public and stakeholder engagement in the implementation of the Agreement,” said Jackson. The new Agreement has more references to involving the public than did the previous one—though it is weak in how it will specifically engage U.S. and Canadian citizens. The only specific commitment is a public forum once every three years. “We need true public engagement by, for example, including stakeholders as full members of working committees set up under the Agreement,” he said.

“We hope that this revised Agreement will revitalize the binational focus on protecting and restoring the Great Lakes-St. Lawrence River ecosystem,” said Jackson. “This Agreement is the main way in which the governments work internationally across the basin on water quality issues. For the well-being of the millions of people who live in the basin, we must ensure that this new Great Lakes Water Quality Agreement is implemented fully and effectively.”