Nearly 90% of Land Animals Could Lose Habitat by 2050, Study Finds 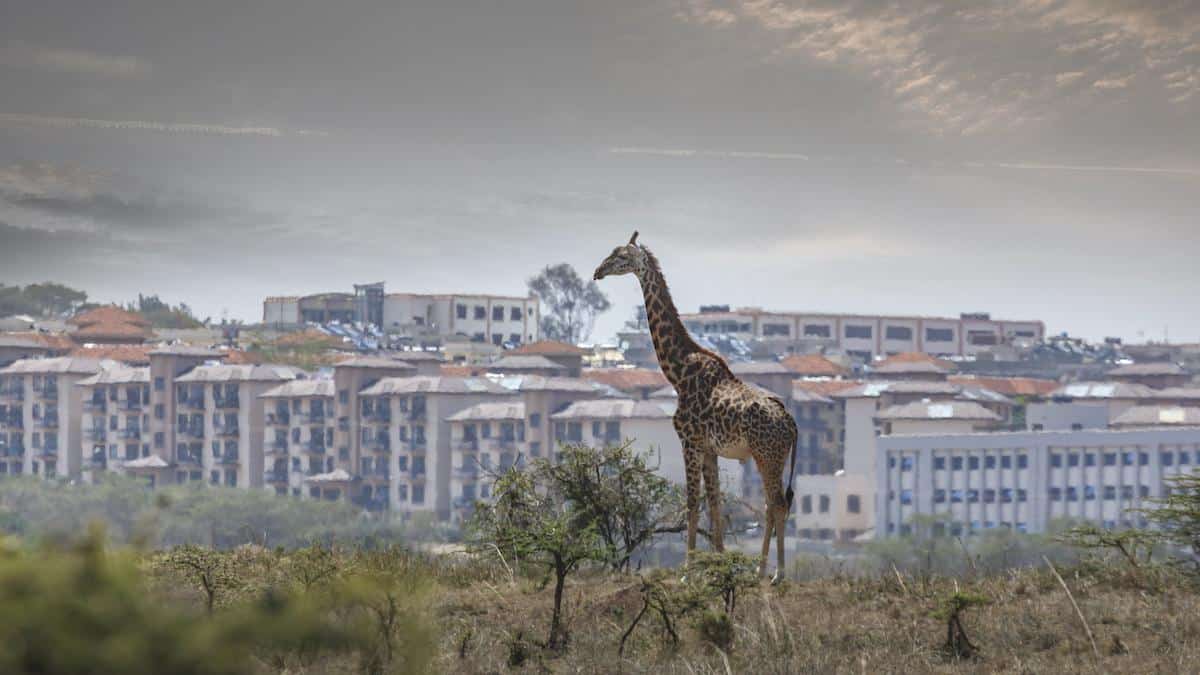 A giraffe in the Nairobi National Park with the Nairobi skyline in the background in Nairobi, Kenya on Sept. 27, 2017.
Buena Vista Images / Stone / Getty Images

Unless global food systems are transformed, the world could face severe ecological damage in just a few decades. A recent study in Nature Sustainability suggests that nearly 90% of land animals could lose some of their habitat by 2050 if current agricultural systems continue as is.

“We need to change what we eat and how it is produced if we are going to save wildlife on a global scale,” said David Williams, one of the study’s lead authors, according to The Guardian. Without a proactive policy, current agricultural systems could cause the loss of millions of square kilometers of natural ecosystems.

From eating less meat to reducing food waste, the study examined how potential changes could make an impact on food systems in various geographical regions.

The team from the University of Leeds and the University of Oxford designed a geographically specific model for agricultural land use, adding outputs with species-specific habitat preferences for almost 20,000 species of terrestrial vertebrates, according to the study.

“Nearly 1,300 species are likely to lose at least a quarter of their remaining habitat, and hundreds could lose at least half,” Williams said according to Science Daily. “This makes them far more likely to go extinct.”

The majority of this loss is projected to take place in sub-Saharan Africa, the Atlantic Rainforest of Brazil, eastern Argentina, and parts of South and Southeast Asia, Yale Environment 360 reported.

The study provides both a tool for scientists to estimate how agriculture expansion will contribute to species and biodiversity loss and suggests solutions food systems could undertake for the transformation necessary. The study’s results “highlight the importance of proactive efforts to safeguard biodiversity by reducing demand for agricultural land,” Michael Clark, another lead author of the study said, as reported by Science Daily.

“The good news is that if we make ambitious changes to the food system, then we can prevent almost all these habitat losses,” he added.

The study proposed a multi-pronged technique that is region-specific, suggesting closing crop yield gaps, promoting healthier diets, curtailing food loss and waste, and implementing early planning when it comes to land-use to avoid conflict between food production and habitat protection.

“No one approach is sufficient on its own. But with global coordination and rapid action, it should be possible to provide healthy diets for the global population in 2050 without major habitat losses,” Clark said according to The Guardian.

The study’s publication comes at the same time 135 groups called on president-elect Joe Biden to sign an executive order, urging him to prioritize the extinction crisis as a threat to humanity in the U.S., according to a press release by the Center for Biological Diversity.

“The unsustainable exploitation of wildlife can have profound consequences, as evidenced by the COVID-19 pandemic, which almost certainly came about due to the trade in wildlife,” the proposed executive order states.

Among its goals to protect 30% of America’s lands and waters by 2030, the proposed order requires all federal agencies, including the Department of Agriculture, to review how its actions cause harm to endangered species and biodiversity.

The order calls for federal agencies to develop conservation programs that comply with Section 7(a)(2) of the Endangered Species Act, which states that any action authorized by a federal agency must not “jeopardize the continued existence of any endangered species or threatened species or result in the destruction or adverse modification of habitat.”

When nearly 75% of global lands and 66% of ocean areas have been altered by people, and nearly 25% of global greenhouse emissions are attributed to agriculture, studies like the one published by Nature Sustainability and demands by the Center for Biological Diversity could motivate drastic change in food systems and promote sustainable land management, reversing both international and national trends towards ecological destruction via their agricultural systems.

“The time for half measures has passed,” Tierra Curry, a senior scientist at the Center for Biological Diversity said in a press release. “President Biden must take bold, immediate action to end extinction because the survival of not just wildlife but humanity is now at stake.”