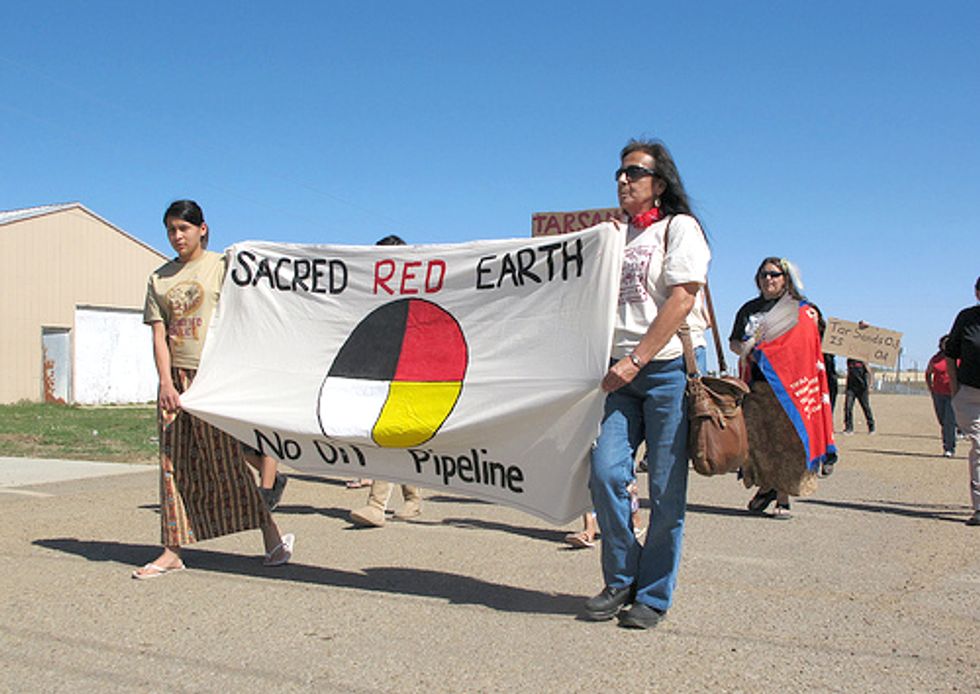 In the Dakotas, members of the proud Lakota Nation rose in protest this week to join a 48-hour hunger strike in opposition to the Keystone XL pipeline—and all tar sands pipelines—they say will destroy precious water resources and ancestral lands in the U.S and in Canada.

On Sunday, dozens of hunger strikers and supporters marched at a rally against tar sands oil mining operations and pipelines in Eagle Butte, S.D., an impoverished community on the Cheyenne River Indian Reservation, close to TransCanada’s 1,700 mile proposed Keystone XL pipeline route to refineries in the Gulf.

Lakota tribal members and their children drove to a camp in the rugged hills near the Missouri River to fast in solidarity with a hunger strike at the Bella Bella Community School in British Columbia. Children at the school are protesting a plan to ship millions of barrels of oil through a potentially dangerous “Northern Gateway” pipeline that would pipe corrosive tar sands oil from Alberta to giant super tankers navigating Canada’s treacherous Pacific coast.

The massive environmental devastation caused by tar sands mining in Canada and oil company plans to ship it through the U.S. has united Native Americans against proposals to build tar sands pipelines here in the U.S. Here's how veteran Lakota activist Debra White Plume described it at hunger strike near Eagle Butte:

"This pipeline is about rich people getting richer, this pipeline is about raping Mother Earth and feeding the machine. For us this pipeline is genocide for us and the First Nations people in Canada. I think our native nations will stay opposed to the Keystone XL pipeline and stay opposed to other pipelines that come through here because we understand that water is a gift from our Grandfather, it’s a gift of life. Our leaders understand that and they’re not going to make a deal. It’s a battle for our water, it’s a battle for our children. These are our grandchildren at the hunger strike, we’re really proud of them for going hungry for Mother Earth and for their elders who are doing this.”

Karen Ducheneaux, who lives on the Cheyenne River Indian Reservation, one of the poorest regions in the country, came up with the hunger strike idea after seeing a powerful video protesting tar sands oil by the children of the Bella Bella Community School in Canada. After talking to her family members and tribal leaders, Ducheneaux decided it was time to act in solidarity with the First Nation peoples of Canada.

“What they’re facing doesn’t just affect them, doesn’t just affect the west coast of Canada or Alberta where the tar sands are. It doesn’t just affect people along the where the pipelines are, it affects the whole world. What they’re doing, poisoning the water and polluting the earth affects all mankind, not just the Lakota or people of South Dakota, but everyone....I'm so proud of the group of school children in Bella Bella and so proud to be able to support them....we can’t drink oil, we’re going to destroy our own ground water and our own ecosystem and then we’re going to be stuck with nothing.”

So on an unusually hot April 1st in the Dakotas, a few dozen hunger-strikers and supporters gathered on family-owned land nestled in the rumpled hills near the Missouri River, land that has been a source of life and nourishment long before settlers invaded their Lakota Sioux territories more than a century ago. Lakota supporters built a sweat lodge and elders sang songs and prayers in support of hunger strikers in Canada over a thousand miles away. They were there to support and protect Mother Earth, a powerful Lakota tradition passed down through the generations, long before oil and mining companies came and polluted their land.

It is a tradition these hunger strikers say they will fight for until there are no Lakota left, a struggle we all should respect and support.