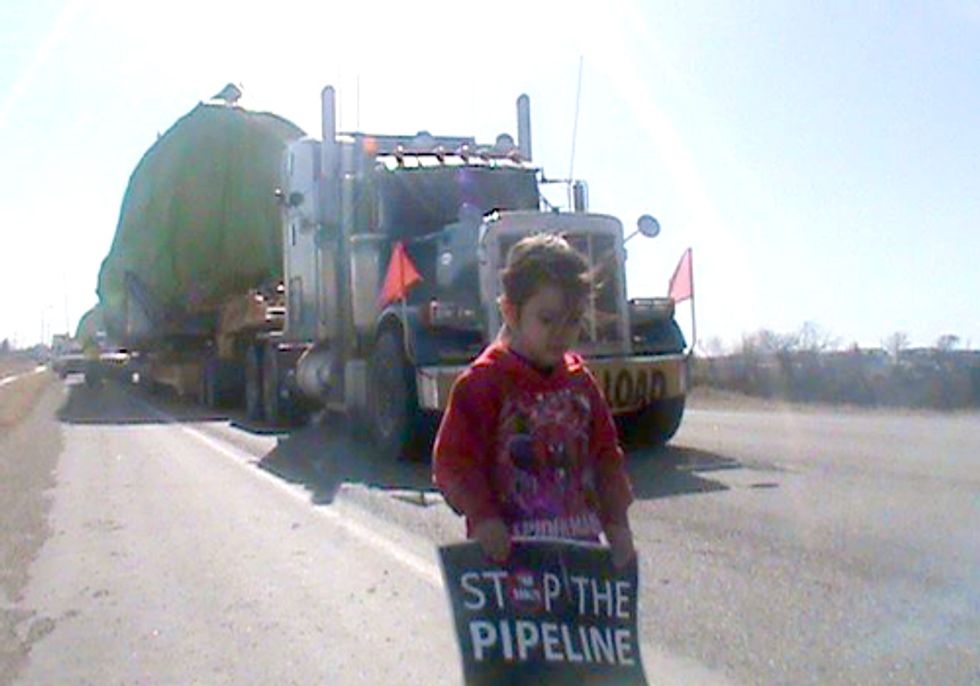 The Call of the Land

A series of events breaking along the border of the Pine Ridge Indian Reservation in South Dakota may well develop into a major news story with resonant consequences for the law, for the environment, for treaty rights, and for the land.

As of March 5, the Lakota Oyate have taken a stand on their reservation border, drawing a line in an attempt to block the passage of trucks carrying equipment for the proposed Keystone XL tar sands pipeline.

KILI Radio 90.1 on the reservation broadcast an Action Alert, calling all Lakota men “to come stand in defense of their treaty-bound reservation land.”

According to KILI, the pipeline trucks refused to turn around and claimed they have corporate rights that supercede any other laws.

The vast Earth-changing Keystone XL pipeline project—ripping up the tar sands of the Northlands and then pumping the toxic goo thousands of miles over fertile but fragile land to the Gulf of Mexico—was supposed to be on hold. But TransCanada, the foreign-owned corporation, continues aggressively to shove, spurt and snake parts of the pipeline forward.

This developing confrontation between Native peoples—who from their traditions understand that they bear responsibilities as keepers of the Earth—and the huge multinational corporate XL Pipeline complex, could become an international focal point.

Updates from the scene as of March 6 report that the trucks are being allowed to pass, and that Lakota people were arrested late March 5 as they attempted to halt the trucks from entering their sovereign territory.

Meanwhile, troubles on the South edge of the Pine Ridge Reservation (the border between South Dakota and Nebraska) came into a strange, fuzzy focus in the March 6 edition of The New York Times. The Times published a disturbing story about the alcohol-induced heartache and misery anchored in Whiteclay, Nebraska, a notorious town squatting on the south border of the Pine Ridge Reservation.