These Prehistoric Fish Are Making a Slow Comeback in the Midwest 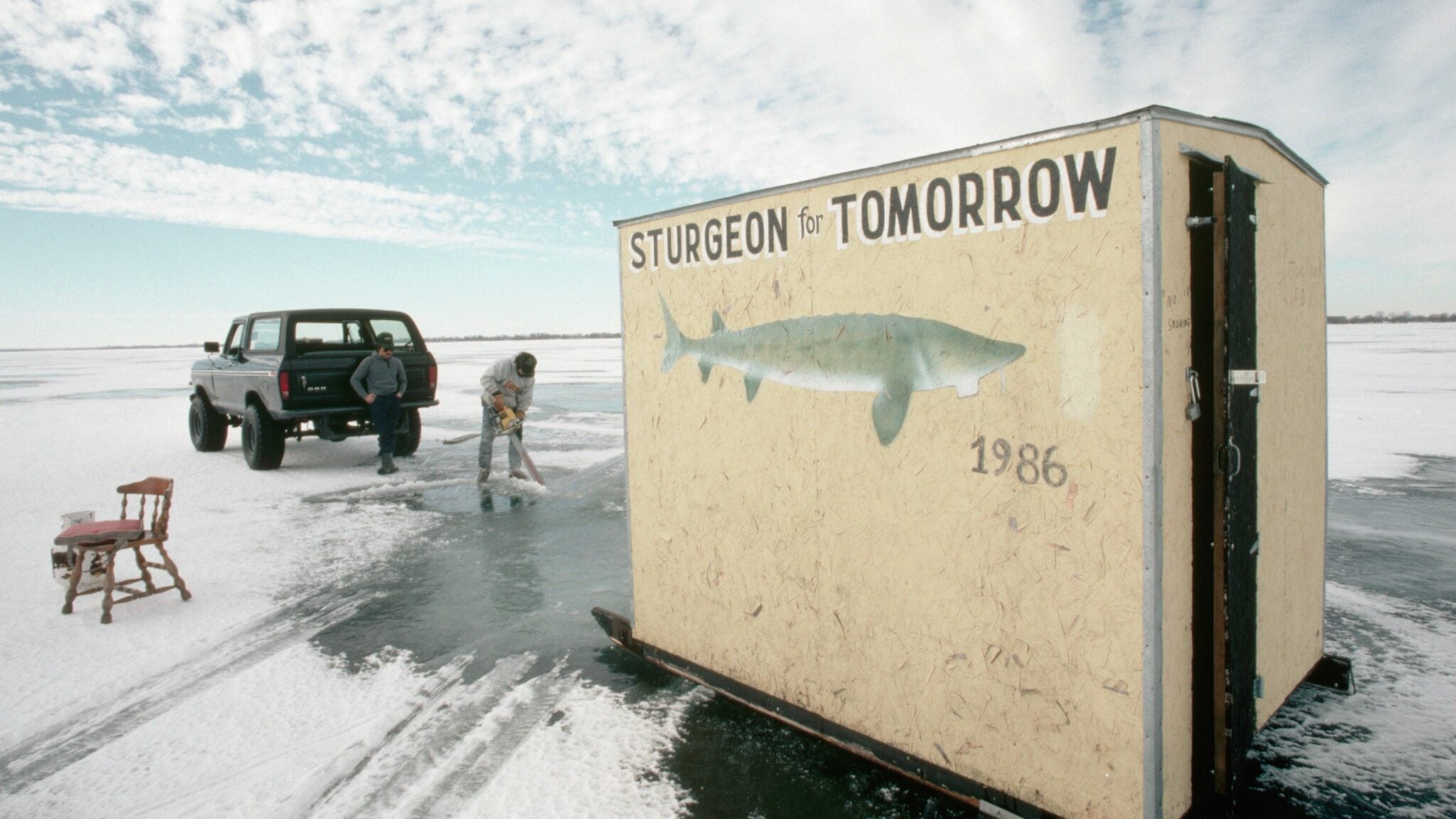 Come February in Wisconsin, almost everything will be covered in ice and snow. In little shanties on frozen Lake Winnebago, a 30-by-13-mile lake in the eastern part of the state, fishers will keep watch over rectangular holes cut into the ice with a chainsaw. When they spot a fin passing below, they’ll jab their spears down deep. The lucky ones will earn themselves a lake sturgeon, a species that has prowled the earth’s waters for more than 150 million years.

Lake Winnebago is one of only two locations in the world where people can spearfish lake sturgeon. These armored fish, also distinguished by whiskerlike barbels growing from their chins, can live as long as a century, weigh as much as 200 pounds, and grow more than seven feet long. Every year, people gather on the lake for a 16-day fishing event. Just 500 licenses exist, a number that keeps overfishing in check while allowing nearly 1,000 sturgeon to be taken for their caviar (for those lucky enough to catch a female) and meat (delicious when smoked).

The sturgeon spearing event will mark its 80th season this year. And with the fish listed as threatened in 19 of the 20 states where it’s found, Wisconsin wildlife officials consider the event one of a number of tactics that help educate people about the fish. (Another is an adoption program allowing members of the public to sponsor and hand-release young fish, reared at a state hatchery, into Lake Michigan and the Milwaukee River, part of the annual SturgeonFest.) Efforts to revive their populations have been somewhat successful, but it’s been slow going: Female lake sturgeon don’t start reproducing until they’re at least 20 years old.

In Wisconsin, you can adopt and release a baby sturgeon or spear a giant one in Lake Winnebago, all part of an effort to bring back these ancient, mysterious fish to the Midwest. https://t.co/DAzBGxoL3d

This biological fact, combined with overfishing, pollution, and habitat degradation, has resulted in their plight today. An estimated 15 million sturgeon used to exist in the Great Lakes, with fishers bringing in upwards of four million pounds per year between 1879 and 1900. The trade took a serious toll on the species. By 1929, commercial sturgeon fishing had closed in Lake Michigan due to too few fish. And by the end of the century, fishers had taken 80 percent of the sturgeon out of Lake Erie. Meanwhile, dams and development ruined habitat and kept the fish from reaching key spawning grounds. In response to the population crash, most states instituted protections and mandated hunting limits in the 1990s and early 2000s.

Today, only 1 percent of the lake sturgeon’s population remains. In addition to the states that list them as threatened, the United States Fish and Wildlife Service announced in August that it would study whether to list the fish as federally threatened or endangered.

“The Right Thing for the Great Lakes”

Ryan Koenigs, a fisheries biologist with the Wisconsin Department of Natural Resources (DNR), is among those dedicated to bringing the lake sturgeon back. He’s part of a team that keeps track of every individual caught, and he helps run the registration stations where fishers who spear a sturgeon in Lake Winnebago must go before taking their catch home. Koenigs and his colleagues look for a passive integrated transponder (PIT) tag, which offers information about the fish. These tags are implanted in each fish reared or caught and released by the agency. Some individuals caught in the past few years were tagged decades ago. “I’m reaping the benefits right now of what the biologists two generations before me did in the 1970s,” Koenigs says.

Restoration efforts also exist in many other states bordering the Great Lakes. In New York, the Department of Environmental Conservation, the U.S. Fish and Wildlife Service, and the Saint Regis Mohawk Tribe harvest sturgeon eggs from the St. Lawrence River and send them to hatcheries in the central part of the state and in Wisconsin. In Michigan, fisheries biologists, researchers, and state agencies successfully protected the sturgeon population in Black Lake and now use the data collected from their efforts to guide their restocking of nearby lakes and streams.

These types of projects replenish waterways with the fish, but the species’ recovery has a long way to go. Should conservationists succeed, the fish could end up benefiting the entire ecosystem, notes Ed Baker, a fisheries biologist in Michigan. “If we have a native species fish community that’s been degraded, that’s a sign that its environment is no longer healthy,” he says. “If we can restore lake sturgeon to their prominence, or at least somewhat close to what their prominence was before we started harvesting them, that’s a sign that we’re doing the right thing for the Great Lakes.”

As the lake sturgeon populations rebound, they could help biologists beat back some new threats, too. Notably, they eat invasive zebra and quagga mussels that now blanket the lake beds. They also eat invasive round gobies. All three of these marine species hail from faraway waters and snuck their way in through the ballast water used to balance ships’ hulls.

In 1995, Baker was tasked with finishing and implementing Michigan’s new sturgeon rehabilitation plan. He observed reach after reach, finding only a few places were the fish still existed. One of those was the Upper Peninsula’s Black Lake. Locals still spearfished sturgeon, and the population appeared to be falling. In 2001 Baker and Kim Scribner of Michigan State University set out to study the fish and get a rough population estimate. They concluded that over a 25-year period, sturgeon numbers had declined by more than 60 percent.

The state’s Department of Natural Resources decided sturgeon spearfishing could continue, but fishers could harvest no more than five fish a year. Baker and his team stocked the lake, too, and the sturgeon population grew. The limit is now up to 14. Still, the population isn’t recovering as quickly as expected.

To figure out why, Baker and Scribner continue their research. They also use the information they collect on basic sturgeon biology, genetics, and behavior to inform conservation efforts in other Michigan water bodies.

One major question they hope to answer concerns the timing of the sturgeon’s reproduction. As with steelhead and salmon, it appears that the river where sturgeon spend the first summer of life, between May and October, is imprinted on the fish, and they come back to that place to spawn. Confirming this would help in their stocking efforts—especially in reaches where the fish haven’t swum for decades.

In addition to the hatchling adopt-and-release program that takes place in September in Milwaukee, Wisconsonites get another opportunity to help biologists in April, when Koenigs does his stock assessments. On the Wolf River near Lake Winnebago, hundreds of thousands of sturgeon ranging in size from four to seven feet long swim along the waterline. Koenigs and his team stand at the ready with nets to pull the fish out of the water, then weigh, measure, and tag them.

When the team finds fish with those tags implanted during the February spearfishing season, they track the data to get a tagged to non-tagged fish ratio, which is then used to set harvest limits. The data collected at each event helps inform how best to manage the species.

“We’re on the right path,” says Koenigs, who is now prepping for the spearfishing season that begins on Feb. 8. “The work that’s being done through these various efforts seems to be showing some pretty promising signs.”