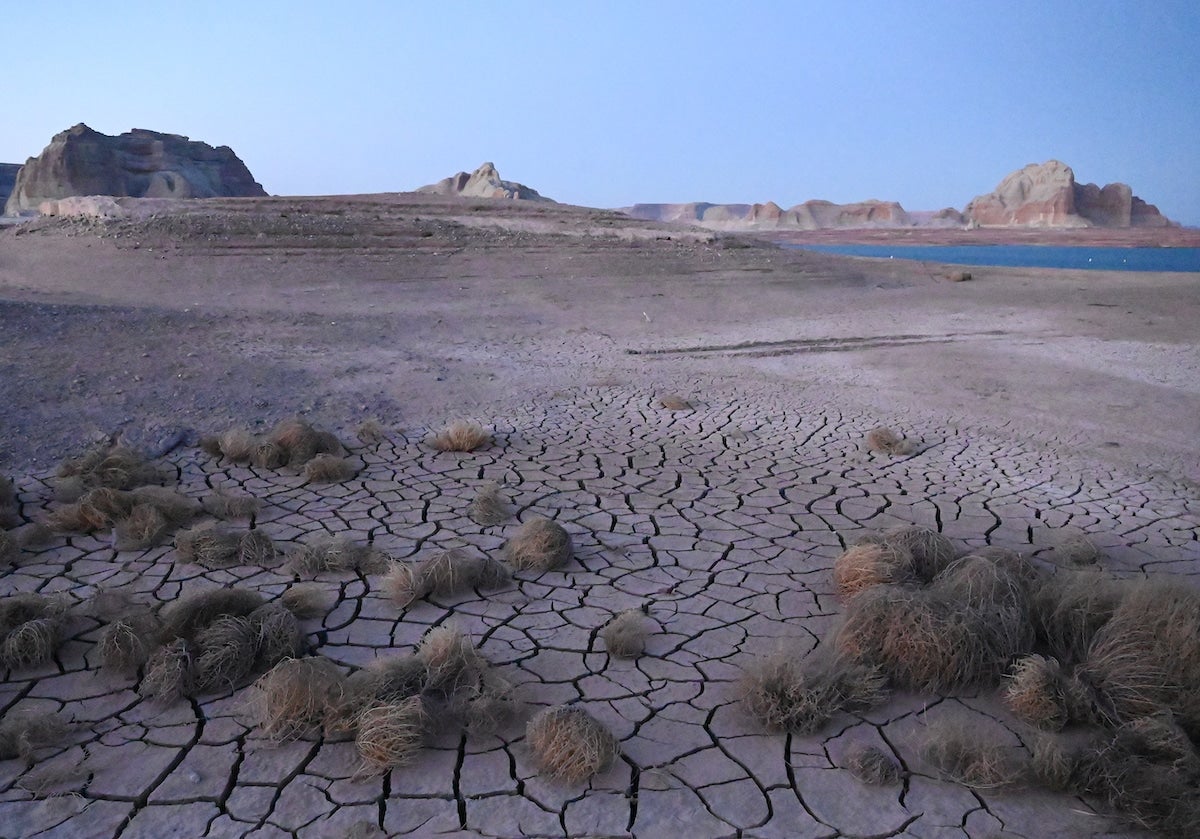 An area near Wahweap Marina that was previously underwater at Lake Powell on April 5, 2022. RJ Sangosti / MediaNews Group / The Denver Post via Getty Images

In an unprecedented move amidst a Western megadrought that started in 2000 and has been exacerbated by global warming, the federal government announced it will take measures to increase the water levels of Lake Powell, a Colorado River reservoir that is so low the hydroelectric power supply for seven states is in jeopardy, reported Reuters.

Water from the upstream Flaming Gorge Reservoir, on the border of Wyoming and Utah, will be released by the U.S. Bureau of Reclamation (USBR) to flow into parched Lake Powell. And water that would have been released from Lake Powell, which is the second largest reservoir in the U.S., to flow downstream into Lake Mead will be kept in the reservoir.

“We have never taken this step before in the Colorado River basin,” said Interior Department assistant secretary Tanya Trujillo, as The New York Times reported. “But the conditions we see today, and the potential risks we see on the horizon, demand that we take prompt action.”

The combination of water from the Flaming Gorge Reservoir and the retaining of water that would have been released from Lake Powell — a combined total of 980,000 acre-feet — will raise the Lake Powell reservoir by 16 feet and keep hydroelectric power production from the Glen Canyon Dam online for the time being, Reuters reported. One acre-foot is equal to 326,000 gallons, which is a year’s supply of water for one or two households.

After the measures, the water supply should last 12 months, after which Trujillo said the circumstances will be examined again, reported The New York Times.

“But it’s not enough to fix the problem,” said program director for Western Resource Advocates Bart Miller, who said his environmental advocacy group was in favor of the decision, as The New York Times reported. “Throughout the Colorado River basin we are using more water than the river provides.”

In the 1960s, the Glen Canyon Dam was built to form Lake Powell, which is currently sitting at a record low water level with less than a quarter of the amount of water it had when it was originally filled.

If Lake Powell drops an additional 32 feet, the power supply from the dam for millions of customers in Utah, Wyoming, Nebraska, Colorado, Nevada, Arizona and New Mexico will be cut, reported Reuters.

Lake Mead, the largest reservoir in the country, was formed in the 1930s by Hoover Dam and supplies water to 25 million people. It is also at a record low 31 percent capacity, The New York Times reported. More pressure will be put on Lake Mead by the new USBR measures, since nearly all of its water comes from water released from Lake Powell.

“We are never going to see these reservoirs filled again in our lifetime,” said professor Denielle Perry of Northern Arizona University’s School of Earth and Sustainability, as reported by Reuters.

Climate change caused by humans is responsible for an estimated 42 percent of the severity of the current megadrought in the West, CNBC reported.

“Our climate is changing, our actions are responsible for that, and we have to take responsible action to respond,” said Trujillo, as reported by CNBC. “We all need to work together to protect the resources we have and the declining water supplies in the Colorado River that our communities rely on.”