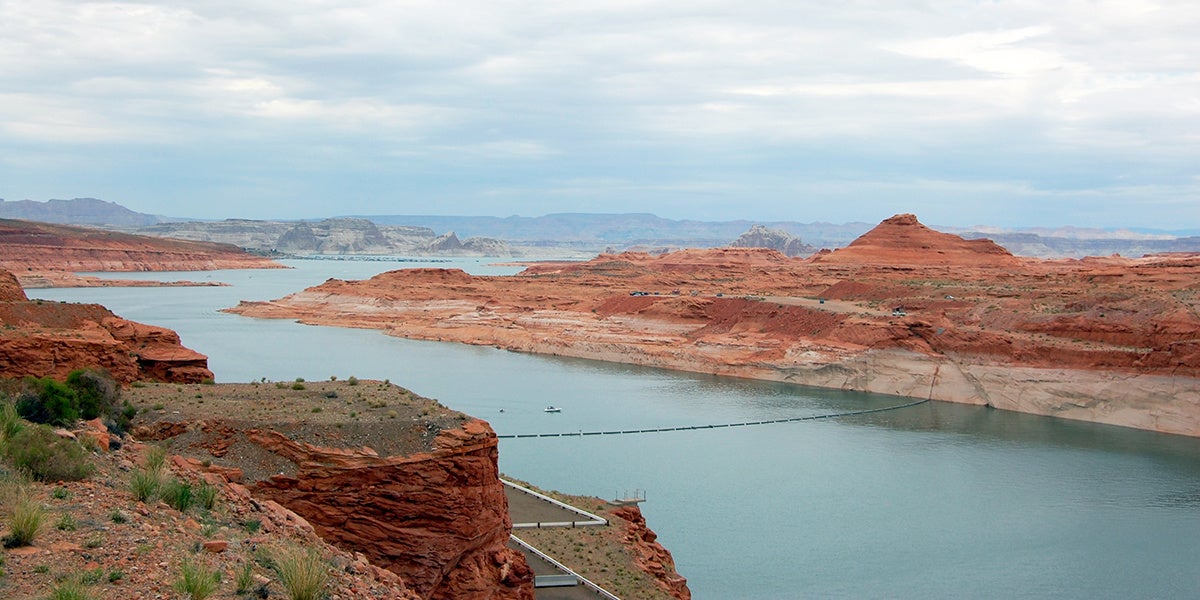 With rainfall at record lows, water is an increasingly precious commodity in the deserts of southern Utah. But in the driest reaches of redrock country, one long-waged water war thunders even louder than the rest.

Utah legislators and water managers have spent nearly a decade trying to break ground on the 140-mile-long Lake Powell Pipeline, which will carry 77 million gallons of water annually from the Colorado River to nearby Washington and Kane Counties. When all is said and done, the project is estimated to cost somewhere between $1.1 billion and $1.8 billion. The specifics are unclear as to who is paying for the project, and delays continue ratcheting up the price tag, but part of the burden will probably be borne by Utah taxpayers through raised property taxes, impact fees and spiked water rates; the rest will likely come from state borrowing.

According to Lisa Rutherford, a public lands activist in Washington County, “it is the moneyed interests that are pushing for the pipeline.” She said that while 22 economists wrote to the state legislator in 2015 questioning the exorbitant costs the pipeline would impose on Washington County residents, developers stand to make millions of dollars from the project.

Pipeline proponents argue that Utah is merely drawing its rightful allocation of water from the river based on the Colorado River Compact of 1922, and that if it doesn’t, other states will take that water. But Rutherford and other conservationists argue that the state has already used its share because the allocations were based on the Colorado River of 1922, replete with 16 million acre feet flows instead of today’s 12 or 13 million acre feet. Rutherford believes that the politicians and developers who support the Lake Powell Pipeline project have blinders on. “They want to get that water flowing sooner rather than later in hopes that if the politics change around the river, they’ll already have that straw in there,” she said.

Anti-pipeline conservationists are concerned about the impacts of the Lake Powell Pipeline on the Colorado River. Different parts of the river—sometimes the upper portion, sometimes the lower, and other times the whole body of water—have been included on American Rivers’ annual Most Endangered list several times. The demands on the river for potable water outweigh its supply–nearly 40 million people from Denver to Los Angeles drink water from the Colorado River, and it currently irrigates 15 percent of the nation’s crops. According to Dan Mayhew, conservation chair at the Sierra Club’s Utah Chapter, climate change is expected to further exacerbate the supply issue, with flows expected to decrease between 10 and 30 percent by 2050.

“We’re looking at the health and longevity of the Colorado River, which is critical to the life of humans and wildlife alike,” he said. “The data clearly exists and demonstrates that the Colorado River is the most endangered river in the United States.”

And Washington and Kane Counties (which currently source their water primarily from the Virgin River watershed) are veritable water guzzlers. Due to a perfect confluence of climate, geography, and funding, water rates in the area are incredibly cheap. Without incentives to conserve, the counties have the highest per capita water use in Utah, which has one of the highest per capita water use rates of any state in the country. Add that to the fact that the city of St. George in Washington County is one of the fastest growing urban areas in the U.S., with retirees and vacationers alike seeking a desert oasis close to a wealth of national parks and recreational opportunities. As retirement communities, golf courses, and resorts proliferate, water consumption will likely increase.

“They call St. George Utah’s Dixie,” Mayhew said. “Everyone knows water is an issue. But at the same time, the culture is very pro-development.”

Instead of draining the Colorado River, some groups advocate for smarter use of local sources like the Virgin River, Navajo Aquifer, Sand Hollow Reservoir, and Quail Creek Reservoir. “The alternative is basically managing our local waters better,” said Tom Butine, board president of Conserve Southwest Utah. In 2013, his organization along with the Western Resource Advocates submitted a Local Waters Alternative to the state and federal agencies in charge of the Lake Powell Pipeline project, which suggested redistributing the area’s water withdrawal across local sources while reducing the consumption per capita by nearly half. Butine said the water district and the state division of water resources didn’t recognize the proposed alternative.

The Washington County Water Conservancy District sees it differently. Karry Rathje, the water district’s public information manager, says that after the governor of Utah established a water conservation goal for all cities to reduce their use 25 percent by 2025, Washington County was the first county to meet and exceed that bar. Their seasonal newsletter, she points out, includes tips for both indoor and outdoor water conservation.

Ron Thompson, general manager at the Washington County Water Conservancy District, adds that drawing from local water sources will stress those river systems and fail to meet the needs of the growing population. The Virgin River, for example, is a small river system with limited watershed at a much lower altitude (read: without the cost-saving benefit of gravity to transport it). Moreover, it is home to a number of native species, including two listed fish that are currently thriving.

Thompson acknowledges that the Colorado River flows are not quite what they were in 1922, but he said, “That water was set aside for these communities to sustain them in the future, and we have as much right to it as anyone else. It’s Utah’s water; we’re entitled to it by the compact.”

The long fight over the pipeline has involved its share of political dealings. The state applied for the project in May 2016 through the Federal Energy Regulatory Commission, even though the project’s main purpose was clearly for water delivery and not energy generation. Even the six hydroelectric facilities along the pipeline are slated to be used primarily to power the pipeline’s pump stations.

This assumption seems to have been correct. The state’s 6,000-page licensing application for the Lake Powell Pipeline cost $33 million to prepare but was submitted to FERC as an unfinished draft that had not been reviewed by the Utah Division of Water Resources. Nevertheless, FERC gave its initial approval to the project in December 2017. FERC later put the review on hold over questions of the agency’s jurisdiction over the project.

One pipeline proponent, Utah representative Mike Noel, owns 700 acres of land and substantial water rights in Kane County’s Johnson Canyon, where the pipeline will pump 3.5 million gallons a day. He failed to disclose the holdings in state filings as potential conflicts of interest, and claims no such conflict exists. Meanwhile, Noel also served as executive director of the Kane County Water Conservancy District, where he was paid a $120,000 salary and often argued on Capitol Hill that the Lake Powell Pipeline is the only way to meet the water needs of Kane County. The proposed pipeline route also crosses lands recently stripped from Grand Staircase–Escalante National Monument, whose reduction Noel had pushed in the state legislature.

Noel announced in March that he will not be seeking reelection. He will, however, continue serving on the four-member management committee overseeing the Lake Powell Pipeline.

Between the paused FERC review and the lack of financing, the Lake Powell Pipeline project appears to be on hold for now—Butine notes that where the project’s website once showed specific dates for beginning construction, they have since been removed—but after a decade of pushing, pipeline proponents are not likely to falter. While the waters have calmed, environmental groups are still on alert.

“This is one of those things that moves slowly and you keep your eye on, but you’re never really sure what will happen next,” Mayhew said.