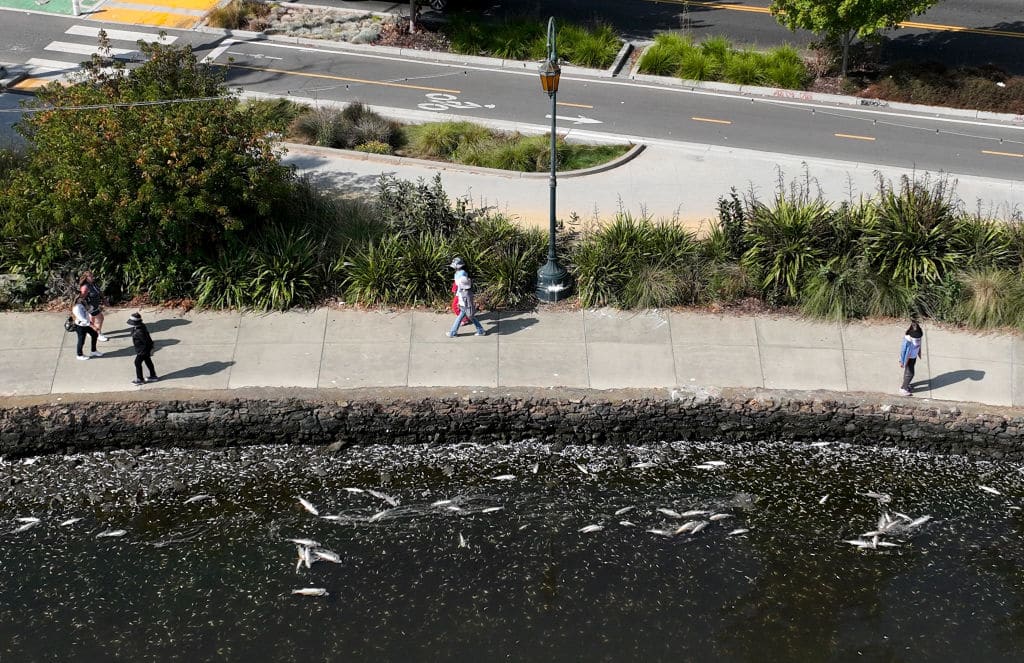 In an aerial view, hundreds of dead fish are seen floating in the waters of Lake Merritt, a tidal lagoon of the San Francisco Bay, on August 30, 2022 in Oakland, California. Justin Sullivan / Getty Images

“The diversity of life in Lake Merritt is just incredible,” naturalist Damon Tighe said, as The Guardian reported.

Only now, that biodiversity is being revealed in the worst way possible. Thousands of dead fish have been washing up on the shores of Lake Merritt and other parts of San Francisco Bay, likely because of an algal bloom.

“I never realized we had that many fish in the lake!” a passerby remarked Tuesday morning, when tens of thousands of dead anchovies appeared on the shore, as the Oaklandside reported.

“It’s a sad way to find out,” Tighe replied.

The dead fish began to wash up on the lakeshore August 28, the City of Oakland reported. At the same time, die-offs were observed across the Bay Area. It is believed that the deaths are caused by a bloom of the algae Heterosigma akashiwo, which was first observed off Alameda Island in July, according to The Oaklandside. When the algae reproduces rapidly, it tints the water a murky brown color and gobbles up all of its oxygen, leaving fish and other lifeforms to suffocate.

In addition to the anchovies, bat rays, smelt and striped bass have also been found dead along the lakeshore, as have clams, bivalves, crabs and shrimp. In other parts of San Francisco Bay, the bloom has claimed the lives of sturgeon as well, The Guardian reported.

“This is like losing giant redwoods,” Tighe told The Guardian of losing the larger fish. “I don’t think people quite understand the significance – this is really big.”

For the bigger fish that do survive, there is concern that the deaths of the smaller fish could deprive them of needed food in the future, according to The Oaklandside. It could also impact the many birds that feed off the marine life.

“I’m really freaked out,” birder Catherine Becker told The Oaklandside. “I’m going to guess we’ll have to rescue a lot of birds.”

“Researchers have known for decades that the levels in this estuary are really high,” he told The Guardian. “In fact, many have wondered why this hasn’t happened yet.”

The City of Oakland has ruled out overflowing sewers and said that algal blooms had many causes, including the climate crisis.

“Generally, increased inputs of nutrients like nitrogen and phosphorus (from fertilizers and human or animal wastes), low water flows, stagnant water, increased intensity and duration of sunlight, and sustained high temperatures create the ideal conditions for these blooms. Current research suggests that the rising temperatures and changing precipitation patterns caused by climate change are a catalyst for their growth,” the city said.

Beginning Wednesday, the city sent crews to remove the rotting fish before a heat wave descends on the region and makes the smell worse, NBC Bay Area reported.

Officials advised concerned citizens not to throw food in the lake and to reduce the amount they watered their lawns to prevent more runoff pollution from feeding the algae.

Is Tree Pollen More Allergic in Polluted Areas?
If you live in a polluted neighborhood, allergy season could
By Olivia Rosane
How California’s Ambitious New Climate Plan Could Help Speed Energy Transformation Around the World
By Daniel Sperling
By The Conversation
Record Renewable Energy Generation in Australia Led to Record Low Demand and Emissions in Fourth Quarter of 2022
Australia’s national electricity market (NEM) had a good fourth quarter
By Olivia Rosane