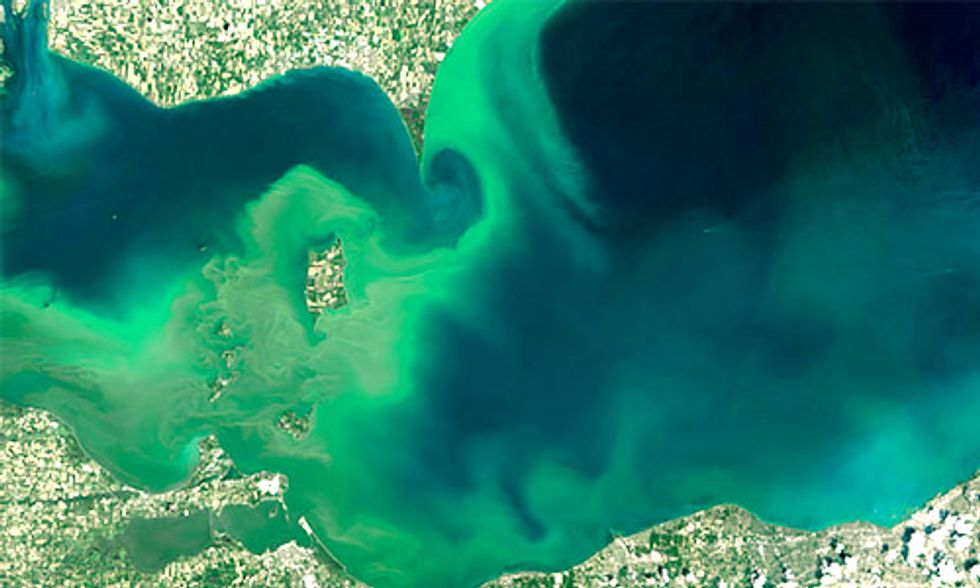 As summer gets into full swing, the people of Toledo, Ohio, begin what has become a disturbing annual ritual—the wait for a toxic algae bloom to erupt across Lake Erie. This year, however, the anticipation may be mixed with hope, as state and federal officials take on this persistent problem.

The harmful blooms have a notorious history. In 2011, toxic algae in the open waters of Lake Erie's Western Basin were 50 times higher than the World Health Organization limit for safe body contact. That same year, levels were 1,200 times higher than the limit for safe drinking water, according to the U.S. Environmental Protection Agency (EPA). In August 2014, toxic algae shuttered the Toledo, Ohio drinking water treatment plant for several days, leading to advisories against the use of tap water in the city. The bloom also led to warnings for Pelee Island, Ontario residents not to use lake water. In total, more than 500,000 people were impacted. And the summer of 2015 produced the largest algae bloom in Lake Erie in 100 years. While it didn't reach earlier toxicity levels, the bloom covered 300 square miles.

Lake Erie is the 12th largest lake on the planet and provides drinking water source for 11 million people. It's the smallest and shallowest of the Great Lakes. Ohio, Michigan and Ontario all border Erie's Western Basin, which is particularly vulnerable to toxic blooms. While algae are a natural presence in fresh water systems, large harmful outbreaks are linked to excessive levels of phosphorus in the lake waters. Coming into contact with the toxic algae or swallowing algae-laden water, can cause rashes, vomiting, numbness and difficulty breathing, among other symptoms. The toxic algae threaten not only drinking water, but rob oxygen from the waters creating dead zones where fish are unable to survive.

The algae problem begins when phosphorus enters the Erie watershed, primarily through agriculture fertilizer and manure runoff. Watersheds contributing to the problem include Canada's Thames River and Leamington tributaries. In the U.S., the Maumee River Basin with its 6,500-mile watershed is the largest phosphorus contributor.

Harmful Lake Erie blooms have been on the increase over the last decade, according to the EPA. Large toxic blooms are expected to become more common as warmer temperatures lengthen the algal growing season and strong spring rain storms create greater runoff of dissolved phosphorus, the type especially potent in feeding algae growth.

Thankfully, the U.S. and Canada are stepping up their defense of the lake. In 2012, the two nations committed to an amended version of the Great Lakes Water Quality Agreement, which was first signed in 1972. And in February of this year, the two nations announced a binational goal to reduce the amount of phosphorus entering affected areas of Lake Erie by a total of 40 percent by 2025. An interim reduction goal of 20 percent by 2020 was also agreed upon. Targets are based on phosphorous levels from 2008, a year determined to represent the average annual phosphorous load in the lake.

More than 40 Canadian and American experts were involved in the process of determining the phosphorous targets, under the leadership of Environment and Climate Change Canada and the EPA. A 40 percent phosphorous reduction would limit the annual load to Erie's Central Basin to 6,000 metric tons. Ohio, Michigan and Ontario have all pledged to support the goal, which took into account both commercial interests and environmental concerns.

“Having a collaborative agreement signed by two governors and the premier of Ontario is a commitment by entities that have the ability and resources to implement the Clean Water [Act] program," said Victoria Pebbles, program director with the Great Lakes Commission, an interstate compact agency that advocates for the healthy development of the Great Lakes and St. Lawrence River region and has been involved in the target-setting process.

“Even though the broad binational agreement is at the highest level of government, where the rubber meets the road when implementing Clean Water [Act] programs happens through states and provinces," Pebbles added. (The Clean Water Act gives the EPA authority to regulate certain types of pollutant discharges into U.S. waters).

The two nations have agreed to develop action plans to reach phosphorus target goals by February 2018.

While management plans are under development, some critics suggest the 40 percent target is inadequate. Sandy Bihn, executive director for the Ohio-based Lake Erie Waterkeeper environmental advocacy group, said the goal falls short because it doesn't adequately account for two significant factors: climate change and increased livestock farming in the region.

“We're never going to slow down the rains from climate change," Bihn said. “More rain in a short period of time causes havoc in Lake Erie."

“We estimate manure from big barn farms is 20 to 30 percent of the [(phosphorus]) load to Lake Erie," Bihn said. “If we take out that 20 to 30 percent, that's half-way to getting Lake Erie blue and healthy again."

Despite the complexities involved in reducing Lake Erie's toxic blooms, Bihn is optimistic that Erie's health can be restored. She pointed out that 90 percent of Erie's water flows down from the Upper Great Lakes giving Erie the fastest flushing rate of all the Great Lakes. Erie's waters turn over every 2.6 years, compared to 6, 22, 99 and 191 years for lakes Ontario, Huron, Michigan and Superior respectively.

“If you reduce sources, like manure, we would see results almost immediately," she said.

Laura Johnson believes other solutions are key to phosphorous load reductions. Director of the National Center for Water Quality Research at Ohio's Heidelberg University, Johnson sees the agricultural industry's adoption of cover crops—which are planted during the off-season and then either incorporated into the soil or left on the surface—as a viable solution to reducing phosphorus in the lake. Johnson explained that the added organic matter adds a sponge-like quality to the soil, curtailing runoff.

“It takes five years before you see benefits," she said. “But it can buffer against wet and dry years."

Only 5 percent of growers in the Great Lakes region currently plant cover crops, according to Johnson.

Johnson said a new, little-implemented farm practice also has potential to curtail phosphorous-rich runoff. The practice, called subsurface injection, deposits fertilizer a few inches below the soil's surface in crop rows. Sitting below the surface, the fertilizer is protected from runoff-causing rains.

Financial support for solutions to the algae problem is growing. In March, the U.S. Department of Agriculture committed $41 million over a three-year period to help Ohio, Michigan and Indiana growers implement practices reducing runoff to Lake Erie. These funds are in addition to $36 million previously committed to the effort through the 2014 Farm Bill.

While programs for reducing the phosphorus load gain steam, projections for the lake's summer 2016 outbreak forecast an average bloom, unlike the monster of 2015, according Johnson. But that doesn't mean the City of Toledo can relax. Johnson added that where the bloom settles this year, as well as its toxicity level, will depend on what weather conditions Mother Nature has in store.

Sally Barber is a Great Lakes-based magazine and news writer. She is the author of The Michigan Eco-Traveler: A Guide to Sustainable Adventures in the Great Lakes State.