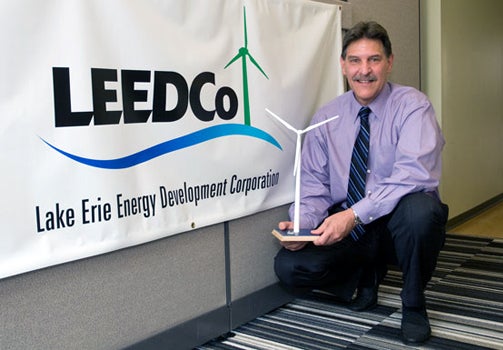 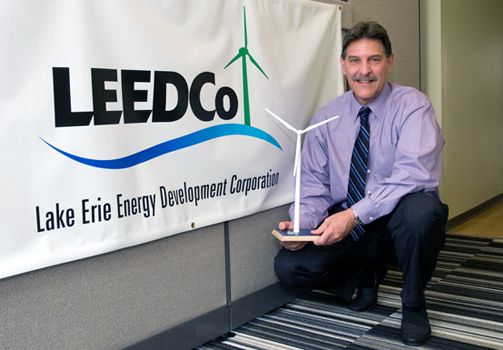 Through a one-year cooperative agreement, the DOE has committed $4 million to support the advancement of the offshore wind energy project known as “Icebreaker,” which consists of five to nine wind turbines seven miles off the coast of Cleveland in Lake Erie. LEEDCo’s private partners committed an additional $1 million in cost share as part of the agreement.

“Icebreaker” is one of only seven offshore wind energy projects that DOE awarded funding today and the only one in the Great Lakes. The selected demonstration projects will help address key challenges associated with installing utility-scale offshore wind turbines, connecting offshore turbines to the power grid, and navigating new permitting and approval processes.

The DOE is making available up to $180 million over the next five years to help accelerate the deployment of breakthrough wind power technologies. “Icebreaker” could potentially receive an additional $46.7 million in federal funding.

“The United States has tremendous untapped clean energy resources, and it is important for us to develop technologies that will allow us to utilize those resources in ways that are economically viable,” said U.S. Secretary of Energy Steven Chu. “Today’s announcement of awards to the first offshore wind projects in the U.S. paves the way to a cleaner, more sustainable and more diverse domestic energy portfolio that develops every source of American energy.”

“The DOE funding for ‘Icebreaker’ is a testament and vote of confidence for LEEDCo’s world-class team members and partners,” said LEEDCo President Dr. Lorry Wagner. “After a highly-competitive evaluation process, I am excited and proud to say that ‘Icebreaker’ was selected for its innovation and expertise in wind energy development, paving the way for future financial support from the Department of Energy and private investors.”

Among LEEDCo’s winning development team for the project are Case Western Reserve University (CWRU), McMahon DeGulis, Freshwater Wind, Siemens and DNV KEMA. The strength of this team comes from combining international partners who have first-hand offshore wind experience with local partners who add value by possessing knowledge of the Lake Erie environment as well as the regional labor force.

For example, with the recently completed 1,000 MW London Array, Siemens has now supplied the world’s largest, in addition to the world’s first, offshore projects. The company holds 80 percent of the offshore market share in Europe and recently contracted to deliver 300 of its new 6 megawatt turbines to leading offshore wind farm developer Dong Energy.

The elite team of LEEDCo partners recognizes the enormous opportunity with this new funding and is committed to making “Icebreaker” a catalyst for building the freshwater offshore wind industry in Ohio.

“With this funding, ‘Icebreaker’ will be a launch pad for offshore wind development in our region,” said Dr. Wagner. “This significantly increases Ohio’s prospects for leveraging first mover advantage in the offshore wind industry, and that will translate into job creation and economic development for our state.”

LEEDCo and its development team will compete among the seven DOE award winners announced today for the additional $46.7 million the DOE is making available. Three of these seven offshore wind energy projects will receive additional funding in the following four years.