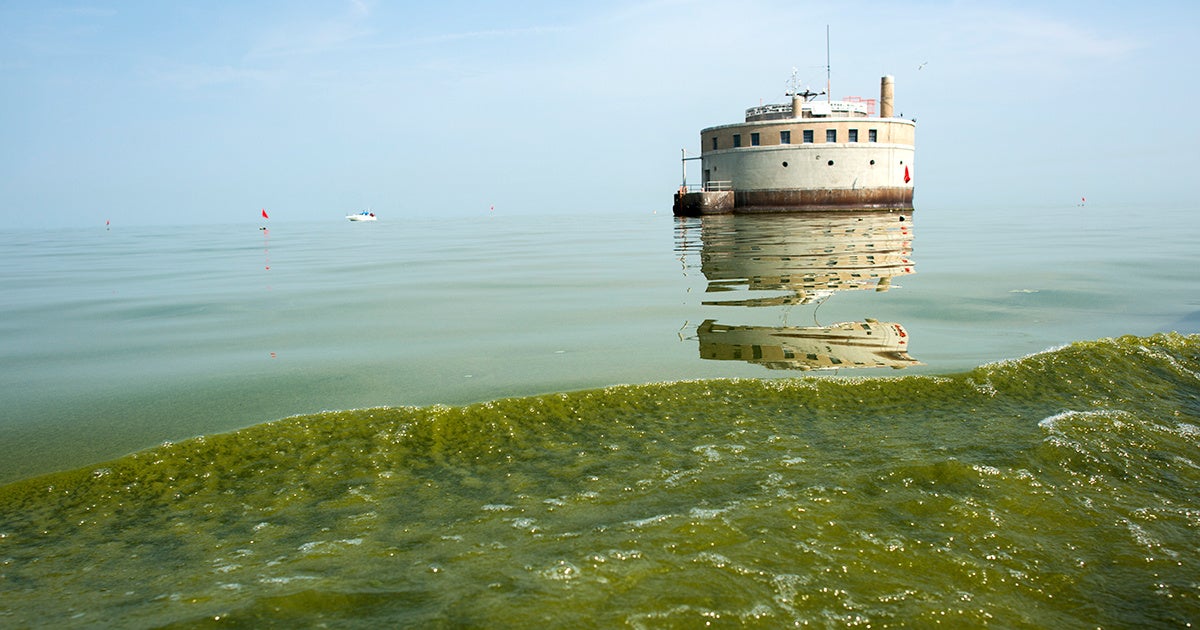 The Lady K tow boat kicks up a wake full of green algae a few hundred feet from the city of Toledo's Water Intake on Lake Erie, for testing on Monday, Aug. 4, 2014. Ty Wright / The Washington Post / Getty Images

In February, the voters of Toledo, Ohio, passed a ballot initiative that gives Lake Erie and those who rely on the lake’s ecosystem a bill of rights. The idea is to protect and preserve the ecosystem so that the life that depends on it — humans included — can have access to safe, fresh drinking water.

On the surface, it seems pretty logical: Humans need water to survive, and if an ecosystem that is relied on for water—in this case, Lake Erie — is polluted (in this case, with algae), then the Lake Erie Bill of Rights (or LEBOR) would ensure the rights of humans would come before the polluters (in this case, big agriculture).

Except, that’s not what’s happening.

Rather, in a perhaps unsurprising move, the state of Ohio has at once both acknowledged rights of nature to exist, and taken them away, with a line written in, of all things, the state budget: “Nature or any ecosystem does not have standing to participate in or bring an action in any court of common pleas.”

“It’s not surprising that the Ohio legislature has the shameful distinction of being the first in the country to specifically name ecosystem rights — trying to quash them rather than taking the lead in recognizing them,” the Community Environmental Legal Defense Fund (CELDF), which was involved in the initiative and is experienced with rights of nature laws and actions, said in a press release. The Lake Erie Bill of Rights has received international acclaim.

Last week, a judge ruled Toledoans for Safe Water, the local group behind the Lake Erie Bill of Rights, cannot defend the voter-passed initiative in a lawsuit brought by a factory farm against the city over the initiative. Yet, the state of Ohio is being permitted to support the farm in the lawsuit against the city.

Big agriculture, of course, is the primary source of nutrient pollution that has caused algae blooms that have denied half a million people access to clean, safe drinking water, sometimes for days at a time.

Markie Miller, Toledo resident and concerned citizen with Toledoans for Safe Water, said the new barriers to implementing LEBOR shows the citizens are on to something. “Obviously we’re doing something right, because we’re scaring the Farm Bureau.”

As the lawsuit is set to proceed as of this writing, the judge said there was no need for the two sides (the farm or the city) to file briefs, and would, rather than hold a hearing, have a phone call on May 17. The call would be closed to the public, and without briefs, the public — who passed the initiative by more than 60 percent of the vote — will not have access to the arguments being used.

Meanwhile, according to a recent report released by the United Nations, “one million plant and animal species are on the verge of extinction, with alarming implications for human survival,” the Washington Post reported.

The report specifically attributes the die-off to human activity. Worse, it points to an inevitable collapse of the natural world humans rely on for food and water.

“Nature’s current rate of decline is unparalleled, and the accelerating rate of extinctions ‘means grave impacts on people around the world are now likely,'” reported the Washington Post.

“All the studies say we need drastic action. If we think the courts are going to save the plants or the animals,” said Tish O’Dell, Ohio community organizer with CELDF, “they aren’t.”

Laws should reflect our values, O’Dell continues. She supports a culture shift to curb the rapid decline of the natural world humans rely on. The change may take time, O’Dell said, saying, “It’s like [with] segregation. That lunch counter moment, it wasn’t in the courts. It was the pushing and the pushing,” that shifted the courts. “That’s what we have to do. As we get more and more people saying nature should have rights, doing their own laws and their own actions, it’ll start shifting things.”

While this shift could take time, we don’t have 150 years to push or wait for nature to have the right to exist.

“We talk about climate change. It’s climate crisis. In my opinion, they’re committing crimes against humanity. It’s homicide and ecocide. We have the scientific studies these species will go extinct. It’s homicide because humans won’t be able to live,” O’Dell said. “We need to start getting more blunt about what is happening.”

“People think the corporation is the problem,” she continued, but cautions against blaming the farming industry or the oil and gas industries for our current situation: “It’s your own government that’s the problem, because they’re protecting them.”

It seems, then, we are in a time when corporations are considered people and their rights are preserved, and the rights of people — actual humans — to have access to the single thing they absolutely must have to survive, clean drinking water — are denied.

“If they think they’ve prevented this movement, all they’ve done is fired people up,” Miller added.

Valerie Vande Panne is a writing fellow and chief correspondent at Local Peace Economy, a project of the Independent Media Institute. She is an independent journalist whose work has appeared in Columbia Journalism Review, In These Times, Politico, and many other publications.

This article was produced by Local Peace Economy, a project of the Independent Media Institute.