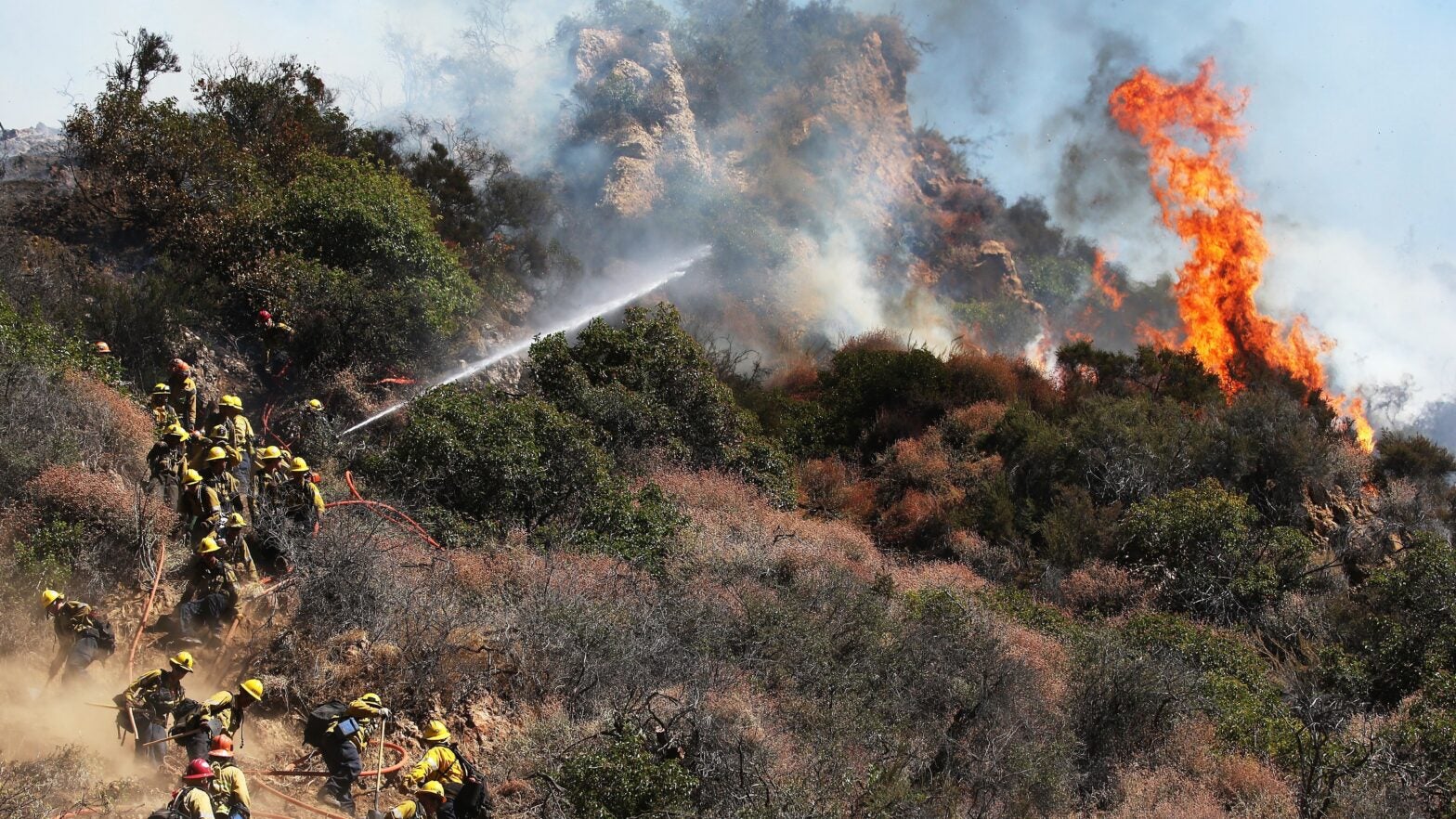 Firefighters work during a wildfire threatening nearby hillside homes in the Pacific Palisades neighborhood on Oct. 21 in Los Angeles. The fire scorched at least 30 acres and prompted mandatory evacuations. Mario Tama / Getty Images

One firefighter received a minor injury and one civilian was taken to the hospital for respiratory problems, Los Angeles Fire Department Chief (LAFD) Patrick Butler said. The evacuation order was lifted around 8 p.m. Monday, but residents were told to remain alert.

“Everyone in high fire danger areas should be cautious and ready to quickly evacuate, since fire danger weather conditions will continue to be dangerously dry and windy over the next several days,” LAFD said, according to CNN.

Residents watch the #PalisadesFire as flames erupt on a nearby hillside and threaten homes https://t.co/mMvw6Xeg6V pic.twitter.com/PVZbFUihK3

Firefighters first arrived on the scene around 10:40 a.m. Monday, The Los Angeles Times reported. When it was first reported, the fire measured less than an acre. Within less than an hour, it had spread to 30 acres and by noon it had consumed 40.

Shortly after it broke out, the terrain-driven blaze raced uphill toward homes on Charmel Lane and Vista Grande Drive, where some residents fled the neighborhood in cars. Others were on their decks with garden hoses, trying to protect their homes from a wall of advancing flames.

Firefighters pulled hoses from trucks into backyards and stood on roofs to defend homes. Television images showed residents running from the flames as fire engulfed a tree in a backyard, sending a plume of dark smoke billowing over homes. At one point, a resident quickly drove his car from his garage as flames hit his backyard.

But firefighters were largely able to keep the flames away from the homes, and none of them were seriously damaged. This was not an easy feat, however, since the fire was on a hillside.

“This is an extremely challenging fire for hand crews,” Butler said, as both The Los Angeles Times and CNN reported. “They’re essentially clawing their way up this hillside with rocks coming down on them.”

The hilly terrain also caused problems for residents, who were caught in traffic jams as they drove on steep and narrow roads. They were also blocked by firefighting equipment, ABC7 reported.

In total, around 150 county and city firefighters fought the flames. The fire was 10 percent contained as of 9 p.m. Monday.

The Pacific Palisades is an affluent coastal neighborhood home to celebrities like Reese Witherspoon and J.J. Abrams, CNN explained.

Charlie Lyons saw the smoke when he was hiking Monday and told CNN that this was the second time he had seen smoke in the Palisades within three weeks.

“You go into denial immediately, saying, ‘I hope it’s not what I think it is,'” he told CNN. “We’re in a terrible cycle right now.”

The immediate cause of the Palisades Fire is not yet known, according to ABC7. Arson is being considered. However, the climate crisis is encouraging the hot, dry conditions that increase fire risk and making fires themselves more extreme.