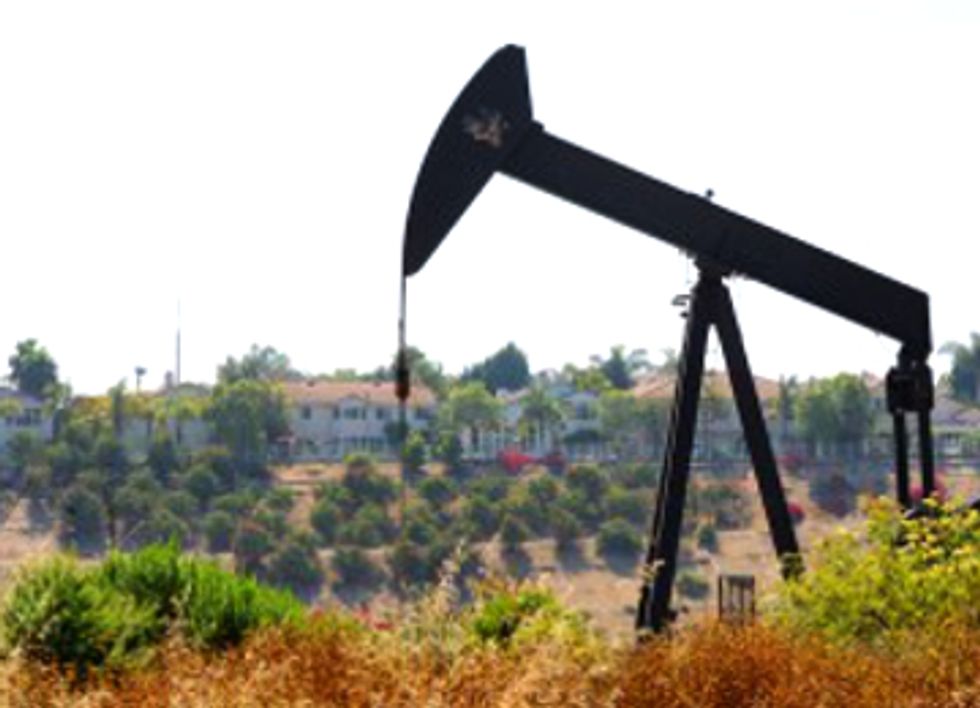 Yesterday, in city hall, Councilmembers Paul Koretz and Mike Bonin introduced a motion to place a moratorium on fracking within the city of Los Angeles and along the city's water supply route. They were joined outside beforehand by the consumer advocacy group Food & Water Watch, the environmental health group Physicians for Social Responsibly-Los Angeles, Citizens Coalition for a Safe Community (CCSC) and the Sierra Club to announce the motion at a press conference.

"On one hand, we're all concerned that a strong earthquake could destroy the Bay Delta levees and contaminate one of L.A.’s major water supplies with salt water," said Councilmember Paul Koretz. "On the other, fracking is happening all over the state, and the United States Geological Survey says fracking-related activity has definitively caused earthquakes in Ohio, Texas, Oklahoma and Arkansas. As a state, we have to decide which it is, are we protecting our water supply, or not?"

"Already, 16 of our neighborhood councils have called for a ban on fracking," Koretz continued. "Like with coal power and plastic bags, if the federal or state governments are unwilling or unable to act to protect Angelenos, we will do our part to lead by example here at the local level."

“The quality of our water and the safety of our neighborhoods comes first,” said Councilmember Mike Bonin. “The threat fracking poses to families in L.A. is serious and I am proud to join Councilmember Koretz in proposing a moratorium on fracking in the City of Los Angeles and along our water supply route.”

Councilmember Bonin called on Gov. Brown (D-CA) to listen to the majority of Californians who disapprove of the inherently dangerous process of fracking and impose an immediate statewide moratorium on fracking.

“As Governor Brown has failed to act, cities like Los Angeles are stepping up to protect residents,” said Brenna Norton, Southern California organizer for Food & Water Watch. “Nationwide the evidence is clear: no amount of regulation can make this fundamentally destructive and toxic drilling safe."

"Food & Water Watch congratulates the courageous leadership of Councilmembers Paul Koretz and Mike Bonin, willing to stand up for Angelenos and all Californians,” Norton said.

Fracking is a highly polluting form of oil and gas extraction that involves blasting huge volumes of water mixed with toxic chemicals into the earth to break up rock formations. The controversial technique is currently unregulated and unmonitored by California officials. Fracking has been tied to air and water pollution, seismic activity and it threatens the climate by emitting large amounts of methane.

“The health impacts of the chemicals used in fracking, acidization and gravel packing are clear,” said Angela Johnson Meszaros, general counsel for Physicians for Social Responsibility-Los Angeles. “Introducing these chemicals into a densely populated city like Los Angeles exposes people to unnecessary threats in both the short term and over the long term. Fracking is all the more reckless because we’re creating all these exposure routes just to extract oil to burn which has its own massive negative health consequences.”

Oil companies have already begun fracking in the Los Angeles region, most notably in the Inglewood Oil Field, the largest urban oil field in the country, located between the Baldwin Hills and Culver City. Residents living near confirmed fracking activity in the L.A. area have already experienced severe property damage, a noxious oil field blowout in 2006 and a spike in serious health concerns.

"The Citizens Coalition for a Safe Community fully supports the councilmembers’ motion calling for a moratorium on fracking and other forms of risked-filled exploitation of the remaining fossil fuel reserves under the city of Los Angeles,” said Paul Ferrazzi of CCSC. “With many old, idle and abandoned oil wells under existing infrastructure in the city, this is the prudent action for Los Angeles city councilmembers to support before a disaster similar to the 1985 Fairfax District Ross Dress for Less explosion is allowed occur again.

"We must act now on the city and county levels to prevent the destruction of our urban and rural communities given Governor Jerry Brown's refusal to impose a statewide moratorium to allow independent study of the environmental and health risks already realized in other parts of the country," Ferrazzi concluded.

Oil companies are gearing up to frack unconventional shale oil in the Monterey Shale, a formation beneath some of the state’s most productive farmland, critical water sources and dozens of towns and cities from the Salinas Valley to the Los Angeles Basin. It has also been noted that the Los Angeles County portion of the Monterey Shale contains more oil per square meter than any other oil producing basin in the world, making it a potential hotbed for fracking and other dangerous extraction activity.

Actor and environmental champion Ed Begley, Jr. also joined the press conference. “It is very important that we realize the potential risks that others around the country have already been dealing with and make sure that we do not expose Californians to those risks,” said Begley. “There are just too many unknowns and our citizens cannot afford foolish experimentation with our water, air, health, earthquakes and climate."

“Fracking has become a very local hot-button issue," said Koretz. "As the industry searches for more extreme ways to wring additional oil out of mature urban wells, we can’t allow their drive for profits to come before the health and well-being of the people of Los Angeles and their property.”