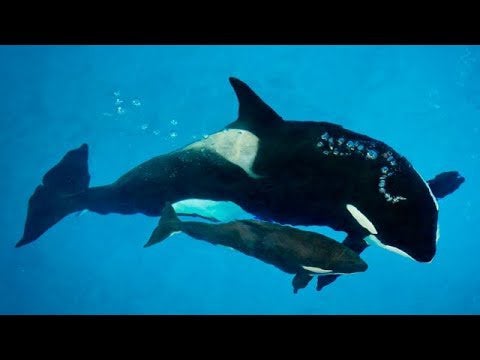 Kyara, a killer whale born at SeaWorld San Antonio just three months ago, died Monday at the park, as reported in this video from Newsy. Kyara is the last orca to be born in captivity under the SeaWorld breeding program, which shut down in 2016.

In a statement, SeaWorld said the cause of death was “likely pneumonia” and that “Kyara had faced some very serious and progressive health issues over the last week.”

“SeaWorld executives have dollar signs where their eyes should be, but even they can’t ignore that 3-month-old Kyara died on #BoycottSeaWorldDay while Academy Award nominee James Cromwell was preparing to lead PETA supporters in a takeover of SeaWorld’s orca show. Forty orcas have now died on SeaWorld’s watch—it’s time for the abusement park to move the remaining animals to seaside sanctuaries before the death toll hits 41.”

Cromwell’s protest at SeaWorld San Diego emphasized that all 40 orcas to die at SeaWorld had their lives cut short because they were in captivity.

“Orcas deserve a full life in the ocean, not a life sentence of swimming endless circles until they drop dead from disease,” Cromwell said. “My friends at PETA and I want SeaWorld to move these intelligent animals to seaside sanctuaries without delay.”

Last August, EcoWatch reported that PETA was trying to persuade SeaWorld to let Kyara’s pregnant mother, Takara, give birth in a seaside sanctuary.