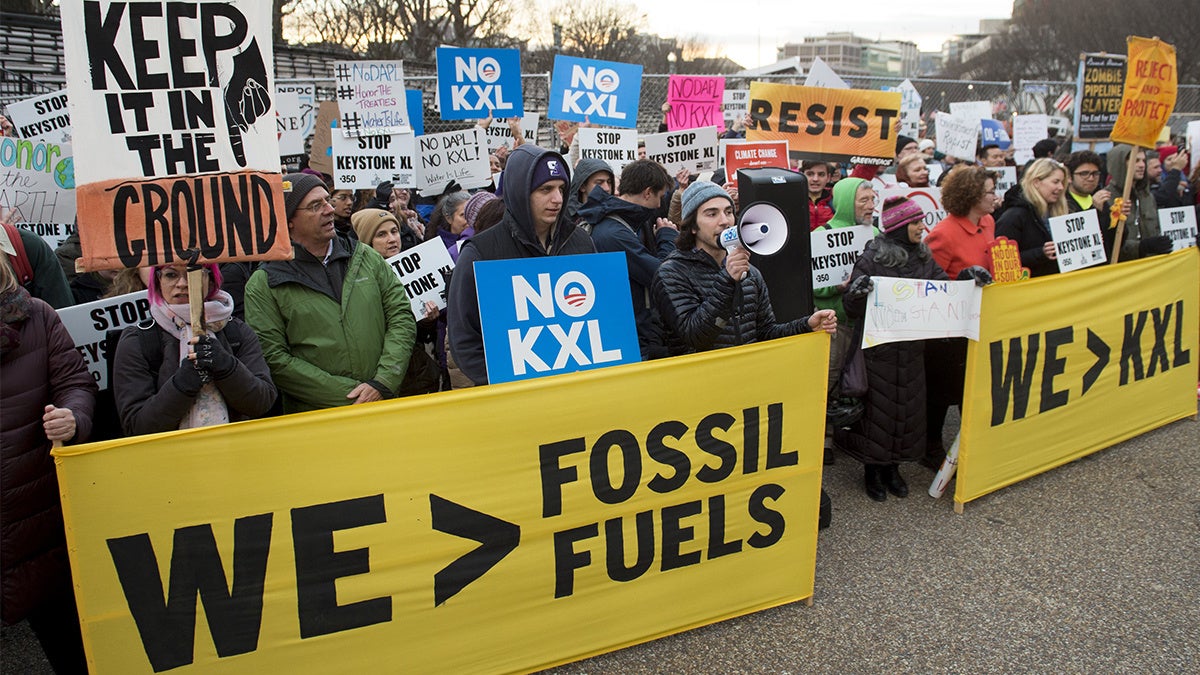 Opponents of the Keystone XL and Dakota Access pipelines hold a rally at Lafayette Park next to the White House in Washington, DC, on Jan. 24, 2017. SAUL LOEB / AFP / Getty Images

Indigenous, environmental and landowner groups fighting to block the Keystone XL pipeline sent a letter Tuesday to the two dozen 2020 Democratic presidential primary candidates, urging them to take the “NoKXL pledge” and vow — if elected — to revoke the Trump administration’s permit for the tar sands oil project.

“There is no middle ground when it comes to protecting the land, water, and climate,” Bold Nebraska founder Jane Kleeb said in a statement. “You either stand with family farmers, ranchers, Tribal Nations, and environmentalists — or you stand with fossil fuel corporations who are abusing eminent domain, and trampling on the treaty rights of Tribal Nations.”

“Tribal Nations and communities are battling for the survival of our ecosystems and ways of life, and we need a president who will stand with us against Big Oil and the fossil fuel regime,” said Dallas Goldtooth, a Keep It in the Ground campaigner for the Indigenous Environmental Network. “Signing the NOKXL pledge is a solid step in the right direction.”

“To build systems that work for all of us, we must keep fossil fuels in the ground, prioritize Indigenous rights, workers, and frontline communities, and hold fossil fuel billionaires accountable for their destruction,” Mebane added. “Together we’ve stopped the Keystone XL pipeline for over a decade. It’s time all presidential candidates join us and commit to stopping KXL once and for all.”

If constructed, the long-delayed pipeline would carry up to 830,000 barrels of crude oil daily more than 1,000 miles from the Alberta tar sands, across Montana and South Dakota, to Nebraska. In a move that critics decried as a “ridiculous attempt” to skirt the law to benefit a fossil fuel company, President Donald Trump issued an “unprecedented and unilateral” executive memorandum in March, granting TransCanada — now known as TC Energy — a permit for the project.

“Our next president needs to listen to the science that says we can’t build new fossil fuel projects and fight climate change at the same time, not the polluters who say we don’t have a choice,” Greenpeace USA climate campaigner Charlie Jiang said Tuesday. “Reversing Trump’s misguided Keystone XL and Dakota Access Pipeline authorizations on day one sends a clear message to the fossil fuel executives that their days of power over the White House are over.”