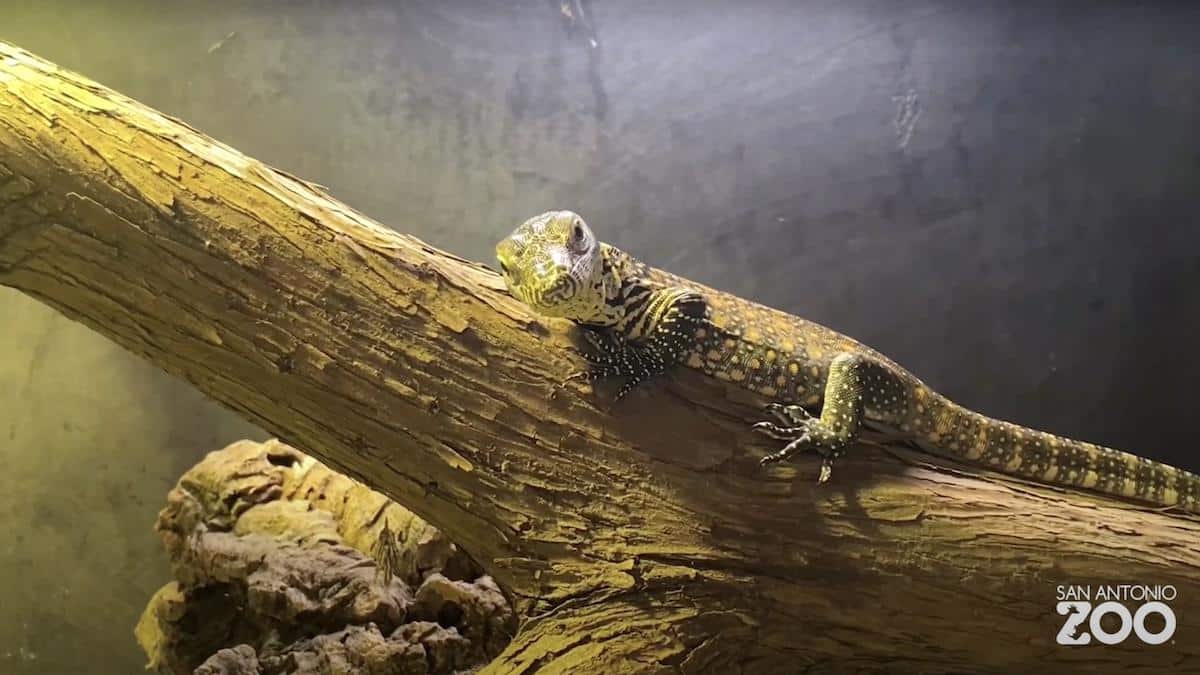 In a huge win for the species and conservationists, ten baby Komodo dragons were born in captivity at the San Antonio Zoo this October.

Komodo dragons are on the brink of extinction. The largest lizards species in the world, they can grow to be 10 feet long and weigh over 300 pounds, according to the World Wildlife Fund. Last year, their IUCN Red List status changed from vulnerable to endangered, raising concern around the world about the iconic species’ survival. Rising seas and loss of habitat due to climate change are to blame.

“Those involved in the conservation of Komodo dragons have been alarmed for some time concerning their overall wild numbers due to habitat loss, potential trafficking, etc. but the recent down-listing from vulnerable to endangered has raised the level of concern a few notches,” Craig Pelke told EcoWatch. It was a lifelong dream of the herpetologist to work with Komodos, and he does so now as the director of ectotherms for the zoo.

Currently, less than 1,400 mature adults of the apex lizard are estimated to remain, a San Antonio Zoo press release noted. These live on a few Indonesian Islands — their only natural habitat — and in zoos. Because they are endemic to those islands, which include the World Heritage-listed Komodo National Park, the reptiles have nowhere to retreat to as those islands become fragmented or submerged by rising seas, The Guardian reported.

Pelke explained, “[The dragons have] a strong preference for lower elevation areas… and this habitat will be the first to disappear as the oceans rise and begin to cover the land.”

That dire reality makes this most recent zoo breeding success monumental for the species’ future.

The parents of this batch of baby dragons were Kristika, a resident female dragon at the San Antonio Zoo, and Boga, a male from the Houston Zoo, the zoo press release noted. They successfully bred last winter, and Kristika laid eggs on March 8 of this year. Incubation typically lasts 7 to 9 months, Pelke noted, and the first of the ten babies hatched on Oct. 17.

“It’s like a dream to have 10 little babies running around,” said Tim Morrow, the president and CEO of the San Antonio Zoo, to The Washington Post. “It’s another important step forward in sustaining the Komodo dragon’s survival.”

Before their birth, there were 123 adult dragons in North American zoos, Pelke told the Post. The latest brood includes four females, two males and four with genders yet to be determined.

“We’re really excited to add another 10 to that group,” Pelke said in the news report. “It’s wonderful to take their numbers in the other direction.”

Under Pelke’s direction, the San Antonio Zoo has coordinated three different hatchings of Komodo dragons. He noted that the successful hatching of 10 dragons from 22 eggs in the clutch is a good rate. Dragons are not social pack animals, instead preferring solitary living, he explained. This makes breeding management and planning complicated because each adult dragon will eventually need its own space at a facility to avoid possible aggressions with another individual.

“In the long run, 10 is a very successful but manageable number,” Pelke told EcoWatch.

Morrow said in the zoo press release, “The hatchlings are thriving, and we are looking forward to watching them grow and help preserve the existence of Komodo dragons.”

The baby dragons will all be sent to other zoos when they’re older to act as ambassadors for their species. There are no current plans to release captive dragons back into the wild. Pelke explained why: “One of the biggest factors that must be asked — is there any wild to release them into? One of the Komodo dragons biggest issues is loss of habitat (human encroachment, oceans rising), so the problem is not so much actual numbers of dragons but actually [the] amount of usable habitat.”

The expert added, “If habitat is restored/gained, and the natural populations cannot recover on their own, then releases could play a role in helping to save the wild populations” in the future.