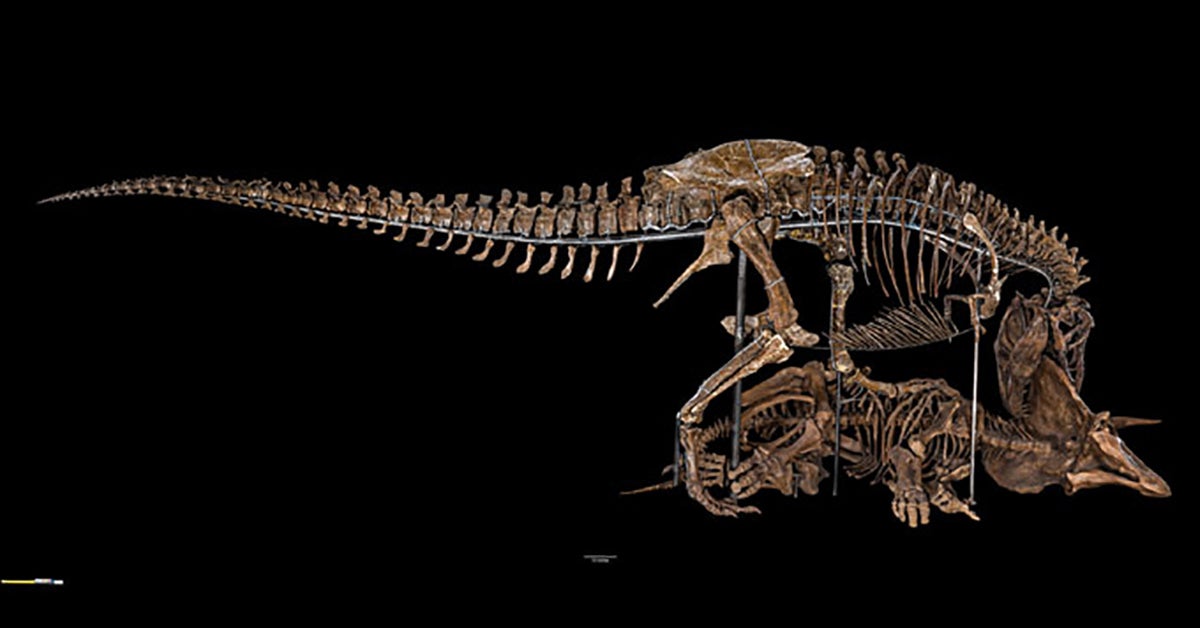 A T. rex skeleton in a live-action pose over a skeleton of a triceratops. Smithsonian Institution

After five years and $39 million, the Smithsonian’s completely renovated Hall of Fossils is open again — complete with T. rex and a message about climate science. But though the exhibit clearly communicates the facts about human influence on Earth’s climate, it is oddly quiet about the most important solution to the problem: rapidly reducing fossil fuel use.

The exhibit at the American Museum of Natural History, called “Deep Time,” was eagerly anticipated. Over 40,000 people toured it just on the opening weekend of June 8.

Equally enthusiastic were the stories filed by the reporters who covered the exhibit for the Washington Post, USA Today, CNN, the Christian Science Monitor, Associated Press and ABC. Many admired how boldly the exhibit broke with tradition. Instead of isolated individual specimens, the new exhibit features ensembles of displayed fossils, related either by a shared ecosystem or an evolutionary lineage. Throughout, the exhibit connects those fossils with Earth’s geologic history, including the new era in which one species, Homo sapiens, is changing the planet and its climate.

As museum director Kirk Johnson explained in an interview, the exhibit weaves together four narrative threads: climate, evolution, extinctions, and humans. In the 21st century, he explained, it would be both unscientific and irresponsible to tell the story of the dinosaurs without also talking about how humans have shaped the future: “Our ancient history holds very relevant clues for what might happen.”

But many news outlets have called attention also to the new name of the exhibit space: The David H. Koch Hall of Fossils.

The director emeritus of Koch Industries, the largest privately owned fossil fuel company in the U.S., David H. Koch has for many years collaborated with his brother Charles in funding groups that questioned the science of climate change and lobbied against efforts to enact climate policies. Three days after the “Deep Time” exhibit opened, in fact, Climate Nexus reported that Koch-funded groups sent a letter to Congress reiterating their vehement opposition to a proposed carbon tax.

Had David Koch’s $35 million fossil-fueled contribution to the Smithsonian affected how the project’s directors rewrote the story of the Smithsonian’s fossils?

In response to a version of this question from Joshua Johnson, host of the nationally syndicated radio program 1A, museum director Kirk Johnson answered, “There’s a bright red line between what we put into the exhibit and what the funder believes, thinks, or feels …. I can tell you that [David Koch] had no impact on the content of the exhibit.”

And, indeed, visitor reactions gathered on that opening weekend by Washington Post reporter Sarah Kaplan indicated that an urgent message about climate change was coming through loud and clear. “We’re terrified,” one visitor told the Post. “I’m glad it’s here in many places. It needs to be a big billboard with flashing lights.”

But in walking through the exhibit attending specifically to what it says on the subject, many may emerge with a more ambiguous take-away message. Koch in some way very likely did influence the exhibit, but not by leaning directly on the Smithsonian.

The Journey Through ‘Deep Time’

After passing through the portal for the exhibit, visitors face a choice of possible paths. On a rise to the left is a separate gallery for the Age of Humans.

Directly in front, the central path curves the full length of the hall, taking visitors back to the time of single-celled micro-organisms and to the glass-walled fossil lab where Smithsonian’s paleontologists and paleobotanists work in full view. Along the way, visitors encounter glass-enclosed models of prehistoric scenes, including one that replicates, in miniature and fully fleshed, the most celebrated tableau in the hall, as shown above: the T. rex skeleton arranged in a live-action pose over the skeleton of a triceratops.

The central path is marked by posts that tell visitors how far back in time they have traveled. Dramatic black columns identify mass extinction events, most notably the asteroid impact that ended the Jurassic and the even more lethal end-Permian extinction, believed to have been caused by a period of high volcanic activity that dramatically increased carbon dioxide levels in the atmosphere. Message: Earth has a turbulent history.

The elements most directly related to anthropogenic climate change are found in and around the Age of Humans. There a pair of graphs compares prehistoric and current increases in carbon dioxide. And captions on columns and walls state one of the exhibit’s main messages:

We’re changing the planet faster than any other species in Earth’s history. What does this mean for our future?

The evidence is clear: We are causing rapid, unprecedented change to our planet. But there is hope — we can adapt, innovate, and collaborate to leave a positive legacy.

A video loop in a side exhibit — “Finding Fossils in Coal Mines” — comes to the same conclusion: “Coal connects the climate of the deep past to the climate of today. What we do with coal today will change the future of Earth’s climate.”

Fossils fuels are changing the climate. Couldn’t be clearer, right?

Yes, “fossil fuels are changing the climate” clearly states the problem. But at best it only implies the solution: Stop burning fossil fuels. An odd reticence about remedies for humanity’s reliance on fossil fuels pervades the exhibit.

Nowhere is the portion of global greenhouse gas emissions attributable to fossil fuels (versus beef production or deforestation, for example) spelled out.

Of the five videos that continuously loop in the small amphitheater devoted to “How Are We Changing the Planet?” only one addresses reducing the carbon in the atmosphere, and it focuses on how soils might store more carbon if more ecological farming practices were adopted. The other four videos showcase efforts by communities to adapt to urban heat waves, storm surges, and rising sea levels, and to reduce humanity’s impact on the oceans.

Nowhere within Deep Time are alternative sources of energy highlighted. To see how much wind and solar energy could be tapped across the globe, one has to go to the nearby ocean hall.

And nowhere within the fossil hall can one find a statement that approaches the summaries offered of the most recent IPCC report, such as this one from Vox: “We have just 12 years to make massive and unprecedented changes to global energy infrastructure to limit global warming to moderate levels.”

Why ‘Deep Time’ Holds Back on Climate Solutions

Within the media coverage of the hall’s reopening one can find two reasons for this reticence. A third can be inferred from the Smithsonian’s somewhat delicate position as a nonpartisan, government-funded institution.

The first reason is practical. To avoid instantly dating the material, graphs extend into the future and captions do not include relative references. Thus, a warning that humanity has just “12 years to make massive and unprecedented changes to global energy infrastructure” was not an option.

The second reason is directly related to the vision of “deep time” promoted by Smithsonian. As Johnson observed in his 1A interview, for 75 percent of Earth’s history the poles were ice-free: “There were palm trees in the Arctic and forests covered Antarctica.” An ice-free future does not mean a life-less nor even a human-less planet.

One of the exhibition’s core team members, paleontologist Scot Wing, elaborated on this view for the Christian Science Monitor: “There’s also no reason from the fossil record to feel that we’ve endangered life on Earth as a whole, or even really ourselves. We seem to be pretty resilient and the technology we have is pretty good at buffering us from bad environments.”

After contemplating the end-Permian extinction, it seems, the prospect of breaching the 1.5 degrees Celsius threshold does not seem so daunting — which is not to say that the consequences of climate change won’t be disastrous.

A third reason for the exhibit’s reticence might be inferred from the Smithsonian’s delicate relationship with the government, and here the Koch brothers’ aggressive anti-climate lobbying may be a factor.

To retain its nonpartisan status, the Smithsonian must steer clear of policy disputes. And in the U.S., major fossil-fuel industry funders, like the Koch brothers, have successfully created disputes even on climate science, for which a broad scientific consensus can be demonstrated. Having pointed out the problem, the exhibit’s creators may feel that pointing out the most logical solution — stop relying on fossil fuels — ventures too far into policy.

Facts With Implications for the Future

According to museum director Kirk Johnson, the National Museum of Natural History greets roughly 40 million unique visitors each decade. What message will the next 40 million visitors take away from the Deep Time exhibit?

They will see that there is a problem. But they will also be given reasons for confidence – or at least reasons not to panic. Most may draw the logical conclusion: Humans must reduce their dependence on fossil fuels. But as Kirk Johnson acknowledged to the Washington Post, “I have no doubt that the kind of individual who is inclined to deny climate change will find it in their soul to do that to this exhibit.

“But this is basic science,” he told the Post. “We’re actually looking at facts about our planet’s history, and then just saying it looks like these facts have implications for the future.”

That point may include the Smithsonian’s own future, as its National Mall location is itself one of the lowest parts of the low-lying District of Columbia, making it, too, vulnerable to rising sea levels and extreme rain storms, such as those that plagued the D.C. area in the early weeks of July.