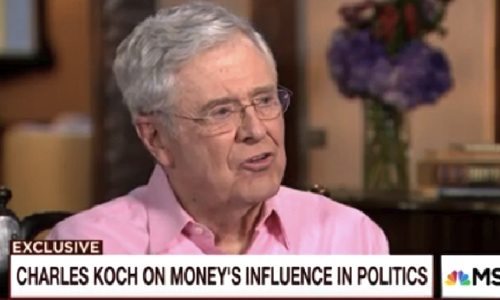 The Koch brothers, who are spending about $1 billion on the 2016 presidential election, are downplaying the amount of political influence their bottomless pockets can buy. 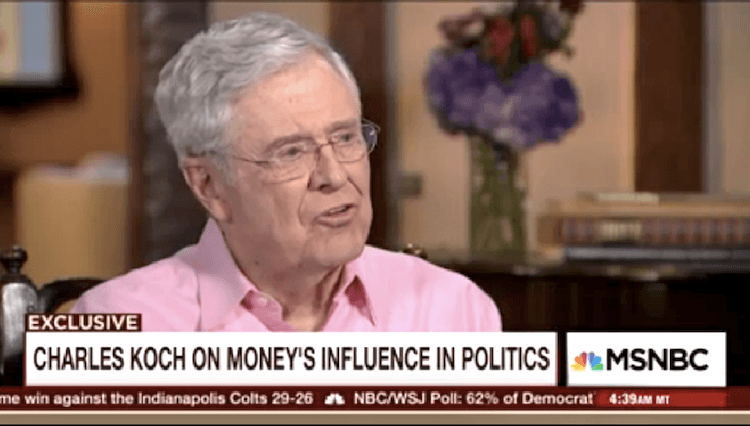 “I’m kind of like Martin Luther when he was on trial and he said, here I stand, I can do no other,” said Charles Koch in a recent interview. Photo credit: MSNBC.

In an interview that aired today on MSNBC’s Morning Joe, Charles Koch said that he and his brother are trying to end corporate welfare by making financial contributions to candidates who could stop government assistance of large corporations (via Politico).

Their company, Koch Industries, has reportedly funneled a jaw-dropping $29,519,116 in campaign contributions to mostly Republican politicians since 2002.

Co-host Mika Brzezinski pressed Koch to elaborate his position, asking him, “It’s well and good that you want to stop corporate welfare … but aren’t you still getting caught in the same cycle of buying influence?”

Koch brushed off her question and replied that he and his brother are “so far … largely failures at it, you can tell.”

Regarding November’s midterm elections, in which the Republicans took over the Senate, Koch said, “We looked like we won,” but “as you can see, the performance, we didn’t win much of anything.”

Charles Koch: We have to be more careful on what candidates we back https://t.co/uGiYdWt0Kv

Later in the MSNBC interview, co-host Joe Scarborough asked how Koch and his family felt about Senate Minority Leader Harry Reid (D-Nev.) calling the brothers “un-American” for trying to “buy” the U.S. with their massive campaign contributions. Reid is an outspoken critic of the family.

“It’s frightening for the future of the country to have these public officials try to hurt and destroy private citizens who oppose what they’re doing, rather than have a conversation and maybe find … areas we can work together on … to make the country better instead of this vitriol and these dishonest attacks,” Koch responded.

It’s not the first time Koch has spoken out about corporate welfare. In August, the brothers made headlines when President Obama slammed them for attempting to thwart the expansion of wind and solar power.

In response, Charles Koch told Politico that his company is not trying to stop the growth of renewables, but is simply just “opposed to renewable energy subsidies of all kinds—as we are all subsidies, whether they benefit or help us,” adding that the President’s words seemed like a personal attack.

As EcoWatch reported, Robert F. Kennedy, Jr. spoke out about the Koch brothers and corporate campaign donations during a keynote speech this summer.

“And today it’s hard to argue that we still have a democracy in this country when you have the Koch brothers, the two richest people in America, who have pledged already to put nearly $900 million into this presidential election, which is comparable to the amount spent by either political party,” said Kennedy. “This year’s presidential election is going to cost $10 billion with half of that coming from 100 wealthy families. Nearly $1 billion is coming from two brothers.”