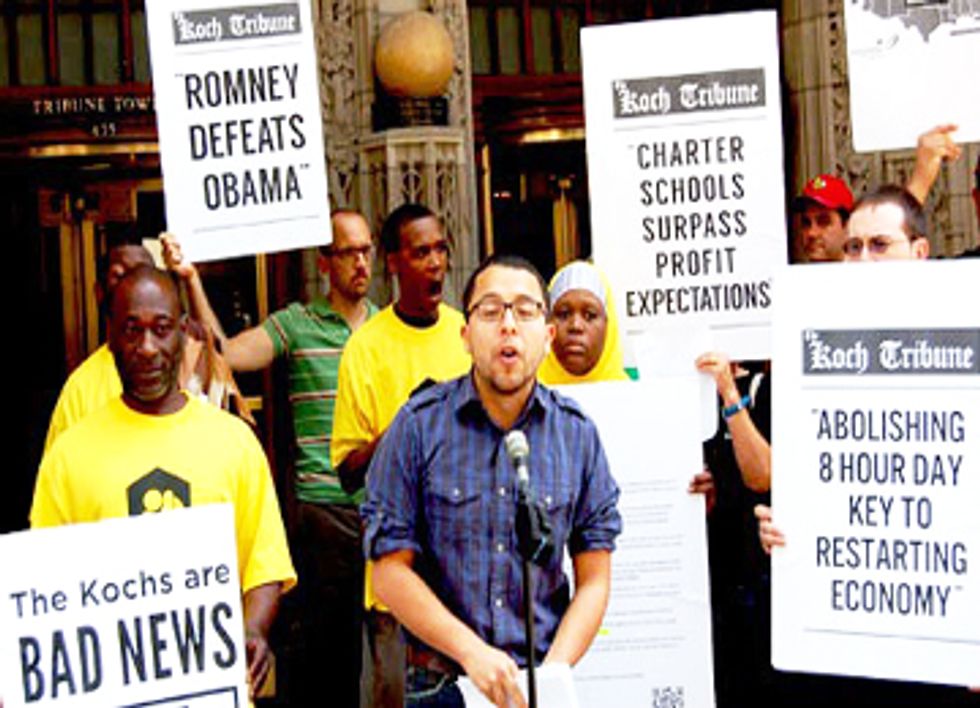 People jammed the entrances of the Chicago Tribune today demanding that it not be sold to Koch Industries, the company owned by David and Charles Koch, top fundraisers for the Tea Party.

They were among crowds that gathered in 12 cities across the country outside of other newspapers that the Tribune Company is planning to sell to the brothers. The list of papers the Koch brothers have their eyes on include the Los Angeles Times, the Baltimore Sun, the Hartford Courant and the Orlando Sentinel.

"We are delivering over 500,000 signatures from members of the public who oppose this sale," declared Shani Smith, a spokesperson for Stand Up! Chicago, as she and others held up petitions and banners in front of the Chicago Tribune's main entrance. She urged people to go online to view and sign the petition.

Frank Venezia, a member of the Lakeview Coalition, an organization that fights for fair housing, was among the demonstrators. "Those of us who want to see affordable housing in this city know that the fight will be tougher if these Koch brothers take over the newspaper," he said. "Anyone who wants to privatize Social Security or eliminate the minimum wage is not going to be a friend of fair housing."

Groups participating in the Save our News Coalition include more than just Stand Up! Chicago, fair housing groups and public education advocates in Chicago. The American Federation of Labor and Congress of Industrial Organizations (AFL-CIO), Forecast the Facts, Climate Reality Project, Common Cause, CREDO, Free Press, Greenpeace, the Other 98, the Service Employees International Union and many other groups are also participating.

"Ownership of the Tribune newspapers would give Koch brothers control of papers read by 5.6 million people on weekdays and 8.7 million on Sundays," said Richard Trumka, president of the AFL-CIO.

"The Koch brothers have given millions to right wing organizations. It is hard to imagine how the Tribune newspapers would continue to provide quality independent journalism to the communities they serve if they were under the control of the Koch brothers."