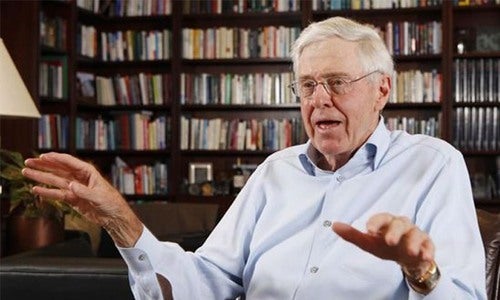 In the run-up to the perennial debate in Congress over whether to extend a tax credit for the wind industry, The New York Times ran a provocatively headlined—and misleading—op-ed column denouncing it as corporate welfare.

Giving Billions to the Rich was a broadside against Congress’ end-of-the-year tax extenders package, which renews temporary corporate tax breaks, and it singled out the wind production tax credit as one of the most egregious. 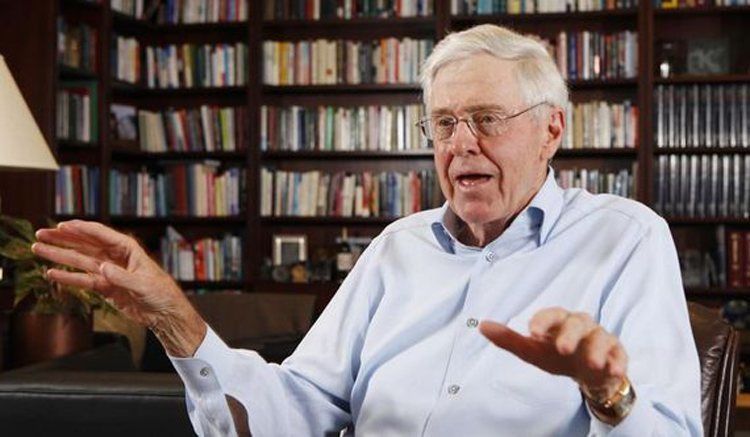 Since 1997, Charles Koch (above) and his brother David have given more than $79 million to groups that distort climate science and malign renewable energy.

The Nov. 23, 2015 column was written by Marc Short and Andy Koenig, both from an organization called Freedom Partners. They pointed out that the package the U.S. Senate was considering at the time would revive a tax credit for new wind energy facilities during their first 10 years of operation, which would cost the U.S. Treasury an estimated $10.5 billion over the next decade. Congress had let the tax break expire at the end of 2014.

“The supporters of this 23-year-old credit initially argued that it was necessary to kick-start a nascent industry,” they wrote. “Yet Energy Secretary Ernest Moniz and others say wind power is cost-competitive with other energy sources. So why are taxpayers still forced to subsidize it?”

Besides the fact that a tax credit does not force taxpayers to “subsidize,” i.e. give money to, the wind industry, Short and Koenig shrewdly confined their argument to temporary tax breaks. By doing so, they were able to avoid mentioning the fact that the wind industry’s more-established competitors—particularly fossil fuels, the primary cause of climate change—enjoy permanent tax breaks and subsidies that are significantly larger.

The oil and gas industry, for example, has been receiving an average of $4.86 billion in annual tax breaks and subsidies in today’s dollars since 1918, according to an analysis by DBL Investors, a venture capital firm. On top of that, Congress exempted natural gas developers from key provisions of at least seven major environmental laws, including the Clean Air Act, Clean Water Act and the Safe Drinking Water Act. That amounts to a substantial subsidy, too, by passing along any cleanup bill to taxpayers.

Renewable energy technologies, by contrast, averaged only $370 million a year in tax breaks between 1994 and 2009, according to DBL. The 2009 stimulus package did provide $21 billion for wind, solar and other renewables, but that support barely began to balance the scales that have tilted toward oil and gas for nearly 100 years and coal for more than two centuries.

So who are Marc Short and Andy Koenig? The Times identified them only as “the president and senior policy adviser, respectively, at Freedom Partners, which advocates for free-market policies.”

What the Times neglected to explain is that Freedom Partners Chamber of Commerce (its full name) is a major pass-through funding arm of billionaire industrialists Charles and David Koch—owners of the coal, oil and gas conglomerate Koch Industries—and Short and Koenig’s Times op-ed is just a small part of a Koch brothers-financed campaign targeting wind and other renewable energy technologies.

Founded in November 2011, Freedom Partners functions as the Kochs’ de facto bank, disbursing contributions from wealthy conservatives to a network of nonprofit “free-market” groups whose goals include rolling back public health, environmental and workplace protections. Unlike a foundation or a political action committee (PAC), Freedom Partners is classified as a trade association, enabling it to raise money without disclosing the names of its donor members, although the amounts and recipients of its grants are public. In June 2014, the organization expanded its arsenal by launching a Super PAC, Freedom Partners Action Fund, which can raise unlimited sums of money and run ads advocating for or against candidates, but it has to divulge its donors.

Freedom Partners Action Fund, whose top donors include the Koch brothers and hedge fund mogul Robert Mercer, raised $29 million and spent $24 million during the 2014 election cycle in support of Republican candidates. But that’s chump change compared to Freedom Partners Chamber of Commerce’s war chest. Between 2012 and 2014, it raised $418 million from its more than 200 anonymous members and distributed more than $387 million of it to dozens of organizations. Much of that money paid for television attack ads, but a chunk of it went to climate science denier groups, including the American Energy Alliance, Americans for Prosperity, Americans for Tax Reform, Club for Growth, Heritage Action for America (the Heritage Foundation’s political arm), and the 60 Plus Association. Those groups—along with Charles G. Koch Charitable Foundation grantees Competitive Enterprise Institute and Frontiers of Freedom—were signatories on a July 27 letter to House members urging them to support a bill that would kill the wind production tax credit (PTC).

The letter claimed the proposed legislation “protects Americans from the large costs of an out-of-control subsidy.” Since the PTC was created, the letter went on to disingenuously assert, “taxpayers have sent billions of dollars to large multinational corporations in the wind industry.”

The bill referenced in the letter, “The PTC Elimination Act,” was sponsored by Mike Pompeo of Wichita, Kansas—home of Koch Industries—and Kenny Marchant of Texas. Pompeo is Congress’ top recipient of Koch campaign money, and ever since he took office in 2011 he has been introducing bills to scuttle the tax credit because, as he says, the wind industry should “compete on its own.” As of November 17, the bill had 53 co-sponsors. Forty-six of them, including Marchant, received contributions from Koch Industries over the last five years.

Of course, no one would expect the Times to explain all of that, but the paper should have at least mentioned Freedom Partners’ Koch connection. Beyond that, the paper also should have fact-checked its debatable description of the organization. Freedom Partners and other Koch-funded groups all claim to promote “free-market” policies, but they don’t complain about the massive subsidies fossil fuel companies receive. For the Koch network, the wind production tax credit is a “wasteful handout,” but eliminating tax breaks and subsidies for the oil and gas industry, as Grover Norquist’s Americans for Tax Reform once put it, would constitute “a massive tax hike on a vital sector of American industry.”

That hardly qualifies as a consistent free-market position.

Coincidentally, a debate over how the Times identifies op-ed contributors was sparked four years ago by a column attacking the wind industry. In June 2011, the newspaper ran a column by Manhattan Institute Senior Fellow Robert Bryce that made a case for natural gas by misstating facts about renewables, and the Times failed to mention in Bryce’s bio that Manhattan Institute funders ExxonMobil and the Kochs are in the natural gas business. A few months later, the Checks and Balances Project, a government and industry watchdog group, sent a letter to the Times criticizing the paper for failing to report op-ed writers’ funding sources, citing Bryce’s column as a prime example. Signed by more than 50 journalists and educators, the letter called on the paper to “set the nation’s standard by disclosing financial conflicts of interest that their op-ed contributors may have at the time the piece is published.”

The paper’s public editor at the time, Arthur S. Brisbane, responded in a column, The Times Gives Them Space, but Who Pays Them? “[T]he issue of authorial transparency is an important one,” Brisbane wrote, “albeit one that isn’t always simple.” He then turned to editorial page editor Andrew Rosenthal to explain the complexities.

Op-ed writers have to sign an agreement that states: “You agree to disclose to the Times any financial interest you may have in the subject matter of the article,” Rosenthal said. Besides that, “story editors ask each writer if there is any real or perceived material or financial interest we should know about.” Finally, Rosenthal said, author bios are written for “clarity, transparency and brevity.”

Brisbane recommended that the Times do more. “So, while I recognize that the Times has limited space in print to provide more disclosure, I believe it should do more to help readers learn about outside op-ed contributors,” he wrote. “In print, besides noting prominent past achievements, author [bios] should include the writer’s current paid role. … On NYTimes.com, the Times should include links to [an author’s] organizational ties so readers can investigate, if they wish. Finally, it would be useful if the Times required contributors to provide a document listing all current paid positions, and publish a link to the document.”

Did the Times take Brisbane’s advice? Apparently not.

Wind Wins This Round, But More Transparency Needed

Fortunately, the Koch campaign to break wind was foiled this time around by some last-minute horse trading on Capitol Hill. End-of-year negotiations over the omnibus government spending bill extended the wind production tax credit through 2019 in exchange for lifting the 40-year-old federal ban on oil exports. That’s good news for the wind industry.

The omnibus deal was also good news for Koch Industries, because lifting the ban on oil exports likely will boost its business. After all, it owns 4,000 miles of pipelines as well as refineries in Minnesota and Texas that, according to the company, together can process more than 600,000 barrels of crude oil a day.

The bad news is that, even after the debate prompted by an anti-wind op-ed back in 2011, The New York Times continues to provide a platform for special interest mouthpieces and fails to disclose their benefactors. To be sure, the Times is hardly alone. But it’s especially puzzling when it comes to the Times, whose editorial board routinely rails against “the scourge of dark money” in the U.S. political system and calls for greater transparency.

The Times should hold itself to the same standard. If its editorial page editors insist on publishing special interest propaganda, they should let their readers know who is paying for it. In this case, an op-ed with the headline Giving Billions to the Rich is indeed remiss if it doesn’t mention the fact that the covert sponsors of the column, the Koch brothers, are among those benefiting the most from government largesse.