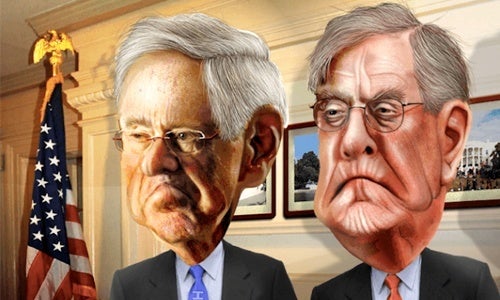 Looks like the extremely wealthy and politically influential Koch Brothers are waging a multimillion dollar war against the burgeoning electric vehicle (EV) market, notably frustrating none other than EV titan Elon Musk. 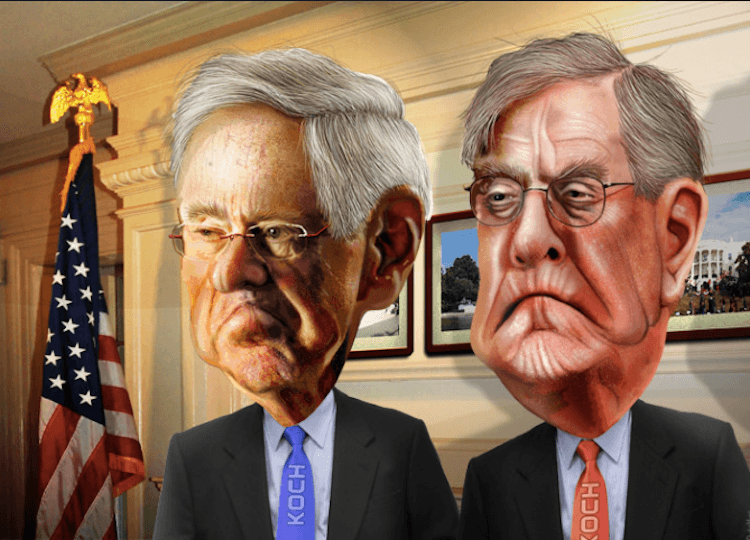 Death to the electric car? Charles and David Koch are reportedly backing a new group that will use millions to promote petroleum and fight against government subsidies for electric vehicles. Photo credit: Flickr

In an effort to strike back at record-breaking EV sales, the fossil fuel industry is allegedly funding a new organization that will spend $10 million a year to push petroleum-based transportation fuels and attack government subsidies on EVs, refining industry sources told the Huffington Post.

According to HuffPo, a Koch Industries board member and a veteran Washington energy lobbyist will be involved in the purported EV-squashing initiative.

“I think they (are) approaching all the major independent refiners,” one industry source explained to HuffPo.

The mission of the still-unnamed group will be to “make the public aware of all the benefits of petroleum-based transportation fuels,” the source said, adding that “the current administration has a bias toward phasing out” these fuels.

“(The Kochs are) worried about state and community subsidies,” the source said. “In 20 years, electric vehicles could have a substantial foothold in the U.S. market.”

Oil baron brothers Charles and David Koch of are two of the four richest Americans according to Forbes, holding more than $80 billion combined in net worth. It’s an open secret that the conservative oil barons have funneled eye-popping sums of money to curry influence in their favor, including nearly $1 billion to GOP candidates for the 2016 presidential election as well as vicious campaigns against climate change and renewable energy.

“The Kochs have invested heavily in a pugnacious defense of fossil fuel consumption,” a conservative energy analyst told HuffPo. “They’ve done this in the electricity sector, and as the debate shifts to transportation they’re behaving true to form.”

One source claimed that the new Koch-backed organization “may be doing work that’s now being done by the Institute for Energy Research.” The Institute for Energy Research (IER), registered by Charles Koch and energy expert Robert L. Bradley Jr., pushes for deregulation of utilities, climate change denial and claims that conventional energy sources are virtually limitless, according to SourceWatch.

Incidentally, the IER is behind an attack on Tesla’s Powerwall, Autoblog reported. The IER claims that it will take nearly 40 years to pay off. Tesla responded, calling the report “elementary, at best, and completely misses the value of the Powerwall.” The IER also responded to Tesla.

Musk followed with another tweet of a Guardian report that shockingly revealed $10 million a minute from global subsidies goes to fossil fuel companies, according International Monetary Fund (IMF) estimates.