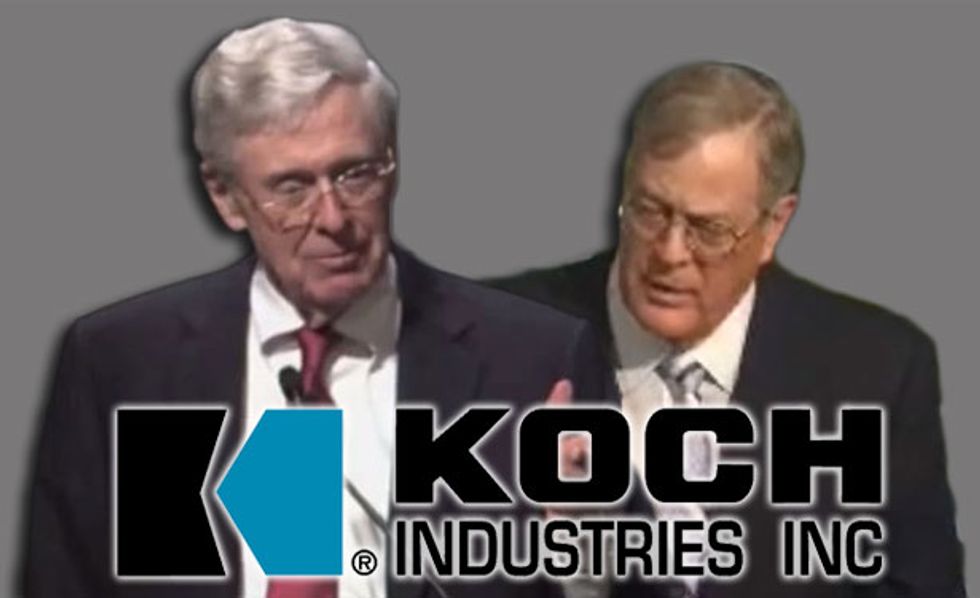 New reports that the politically conservative Koch brothers are interested in buying the Tribune Company's eight regional newspapers—which include the Los Angeles Times and Chicago Tribune—are sparking concerns from newspaper staff members that attempts to influence the editorial process in favor of their far-right political views may follow.

Among those concerned is Clarence Page, a top Chicago Tribune columnist, who said he would oppose a takeover of the paper by David and Charles Koch because of "the fact that they seem to be coming in upfront with the idea of using a major news media as a vehicle for their political voice."

Since Sunday, both The New York Times and The Wall Street Journal have reported that the Kochs are among leading contenders to purchase the newspapers from the financially troubled Tribune Company.

The Kochs are major funders of the American conservative movement, funneling tens of millions of dollars every year to build a right-wing infrastructure geared toward reducing the size and impact of government. As the Times detailed, at a 2010 convention of like-minded political donors, the Kochs "laid out a three-pronged, 10-year strategy to shift the country toward a smaller government with less regulation and taxes." Part of the strategy called for investing in the media.

And that has staffers at Tribune Company newspapers—several of whom requested anonymity for fear of losing their jobs—nervous about the possibility that a Koch takeover could bring with it an ideological focus on the news that risks turning the papers into what one reporter calls a "conservative mouthpiece."

According to those staffers, such concerns are rampant at the papers. "Nobody I know in the newsroom would find it a happy event to have the Koch brothers owning the paper," said one longtime Chicago Tribune staffer, who suggested that the purpose of the takeover is so that the brothers can use the publications to "promulgate their political views."

"I think we all have concerns when you think an owner might try to influence editorial content," explained Angela Kuhl, newspaper guild unit chair at The Baltimore Sun. "That is sort of contrary to what the newspapering business should be about, free press. You don't necessarily want owners and publishers dictating content."

It's the Kochs' explicit call for investing in the media to achieve their political end that has Kuhl worried. "I read the story that said they have a three-pronged approach to how to move the country in the way they think it should head, and one is to influence the media."

A staffer in the Tribune Company Washington bureau warned that such an arrangement could destroy the credibility of the papers: "I am hard-pressed to think of any excursion into traditional media that has been ideologically-driven the way this one would be. The analogy might be Fox News or The Washington Times. The more ideological it is, the fewer people will read it and take it seriously."

While other newspaper owners have had past political interests, several of the staffers we talked to sounded a note of concern at the Kochs' lack of previous experience owning newspapers; their previous support for media outlets appears to be backing the Franklin Center for Government and Public Integrity, a non-profit organization whose websites and affiliates provide free statehouse reporting from a conservative perspective to local newspapers and other media across the country.

"You are looking for owners and publishers who are interested in the good and the public trust," said Chris Assaf, a video editor at The Sun. "Are the Kochs high on the list? I would say definitely not—they don't have a lot of experience, they have been involved in very self-interested organizations like the PACs and so forth."

A reporter at one of the smaller Tribune newspapers, The Daily Press, echoed this concern. "They don't seem to have any experience operating newspapers. I don't know what would happen, it is hard to predict. I recall they spent gobs of money on various right-wing issues."

In fact, this lack of experience has some staffers at the Tribune papers longing for the possibility that News Corp. Chairman and CEO Rupert Murdoch, another potential bidder, buy the publications.

Chicago Tribune columnist Page compared his feelings about a potential Koch purchase to the response of legendary Chicago columnist Mike Royko when Rupert Murdoch bought the Chicago Sun-Times in 1984; Royko quickly quit the Sun-Times for the Tribune.

"A reporter asked him what he thought of the purchase," Page recalled, adding that Royko said a Murdoch paper "isn't something a respectable fish would want to be wrapped in."

But Page says there is something worse than having Murdoch purchase his paper: "My personal feeling is I would much rather have Murdoch buy the Tribune than the Koch Brothers."

He's not alone. Another newsroom veteran at the Sun Sentinel in Fort Lauderdale, FL, agreed that Murdoch would be a more welcomed owner than the Kochs.

"Of all the prospects that are out there," explained one Times reporter, "the Koch Brothers are at the bottom of the list."