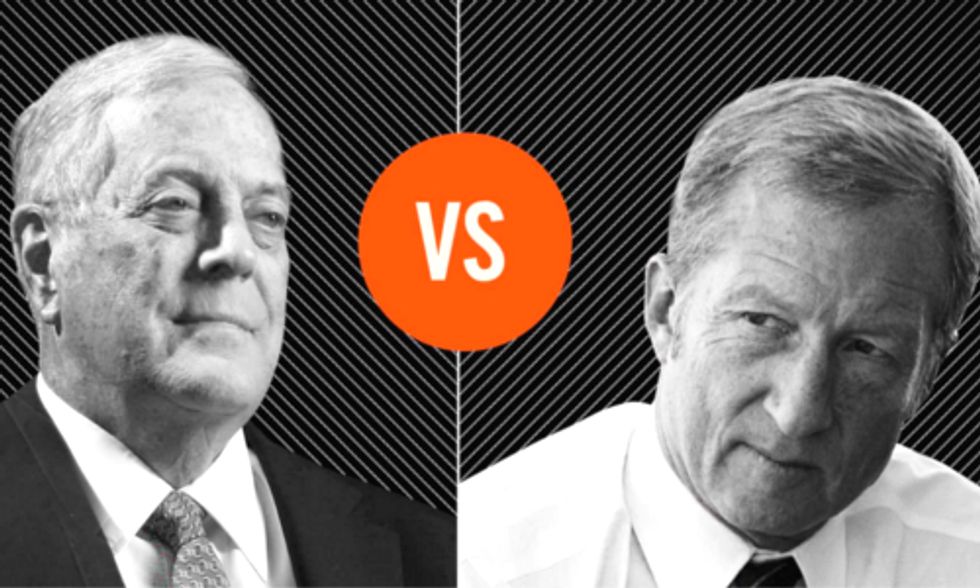 Steyer, a billionaire activist for renewable energy and climate awareness, took things a step further Friday by placing an advertisement requesting a debate in the Koch's hometown newspaper, The Wichita Eagle. A bold move, no doubt, but not enough.

The Kochs have declined the offer.

“We are not experts on climate change,” Koch spokeswoman Melissa Cohlmia told the newspaper. “We do believe there should be free and open debate on the climate issue and it should be based on sound science and intellectual honesty."

Steyer extended the invitation after Charles Koch argued in theWall Street Journal that there needed to be more free and open debate on climate change. Apparently, Koch didn't mean that he or his brother should be a part of that.

“We’re glad that Koch Industries has acknowledged that they are not experts on climate change,” said Heather Wong, a spokeswoman for Steyer's NextGen Climate Action. “The scientific community has, in fact, had a free and open debate about climate change and reached an unequivocal conclusion: Our climate is changing and carbon pollution from burning fossil fuels is primarily responsible.”

The actions of Koch Industries show that the brothers don't agree with that, and now their words show that they're unwilling to debate it.

“The Koch Brothers have always been shrouded in secrecy, their labyrinth of shadowy organizations have spent hundreds of millions of dollars benefiting candidates who deny basic science and push legislation that enables climate change,” the advertisement read. “Charles Koch has already mourned the oppression of ‘free and open debate.’

"Here’s his chance to do something about it.”