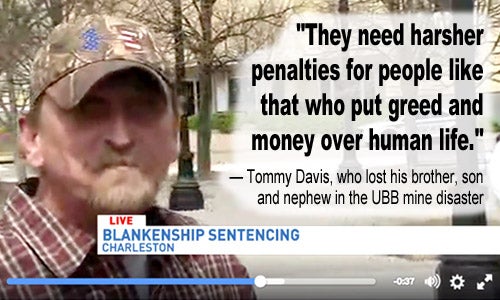 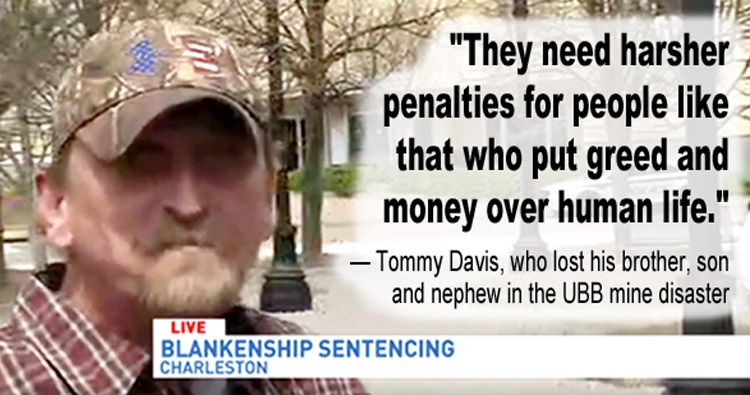 Blankenship was acquitted in December of three felony charges over his direct personal responsibility for those deaths. But he was convicted on conspiracy to violate federal mining safety standards. And yesterday, federal judge handed down a sentence of one year in prison, plus a year of probation and a fine of $250,000 for Blankenship’s crimes.

Had he been convicted of all charges, Blankenship would have faced a maximum of more than 30 years.

“Don Blankenship killed those 29 men with greed as surely as if he had fired a gun at them,” said environmental attorney Robert F. Kennedy, Jr. “He is a sinister creature of unrestrained capitalism.”

For over a quarter century, Blankenship ruled with an iron fist as the notoriously aggressive former head of Massey Energy, one of the nation’s largest coal mining companies.

Blankenship was appointed CEO of Massey after successfully waging a campaign to beat back a major strike in 1984-85—and proceeded to deliberately circumvent the most basic of federal mining safety rules, prosecutors argued. His hands-on approach meant that he was personally involved in helping mine managers dodge federal safety inspectors, federal prosecutors argued when Blankenship was indicted.

Blankenship had emerged triumphant from the courtroom following his acquittal on the felony charges, The New York Times reported in December, dropping a wink at reporters outside the courthouse. His legal team had asked the court for clemency, telling U.S. District Judge Irene Berger, the daughter of a coal miner, that probation would suffice to deter other energy companies from similar conduct.

In court, Blankenship continued to rebuff accountability. “I am not guilty of a crime,” he told the judge at one point.

Following the sentencing, the scene outside the courtroom was emotional, as those who lost family grappled with a mix of vindication from the fact that Blankenship would serve time in jail and frustration at the former executive’s refusal to take personal responsibility for the catastrophe.

“For six years, he never apologized,” a tearful Tommy Davis, whose son, brother and nephew died at Upper Big Branch and who was himself a former miner,” told Bloomberg. “He’s got family to hug him. I’ve got tombstones.”

Blankenship had briefly tried to re-insert himself into the debate over energy policy briefly after his indictment, remaining among the ranks of climate-deniers. “Record low temperatures are freezing the Global Warming movement,” one of his most recent tweets, from November 2014, reads. “Hope @BarackObama notices that Climate Science is not settled.”

“Some measure of justice has finally caught up with Don Blankenship and his sentencing today will add to the growing chorus of coal communities demanding that industry executives must be held accountable when their decisions destroy people’s lives—whether it be from safety violations or continuing to destroy their land, air, water and health.

“Today’s sentence comes on the day after the six year anniversary of the Upper Big Branch mine disaster and we hope it gives some solace to the families of the 29 miners who lost their lives in 2010. Our thoughts are with them today.”