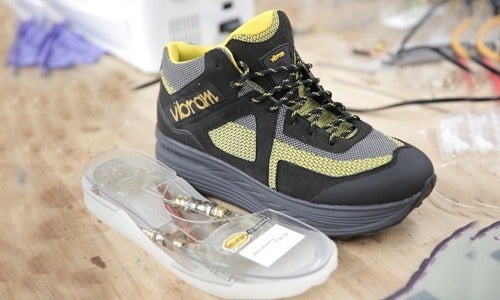 Mechanical engineers at the University of Wisconsin-Madison have developed electricity-generating footwear that lets you charge mobile electronic devices simply by walking.

As it turns out, “human walking carries a lot of energy,” as UW-Madison mechanical engineering associate professor Tom Krupenkin said in a university news release. 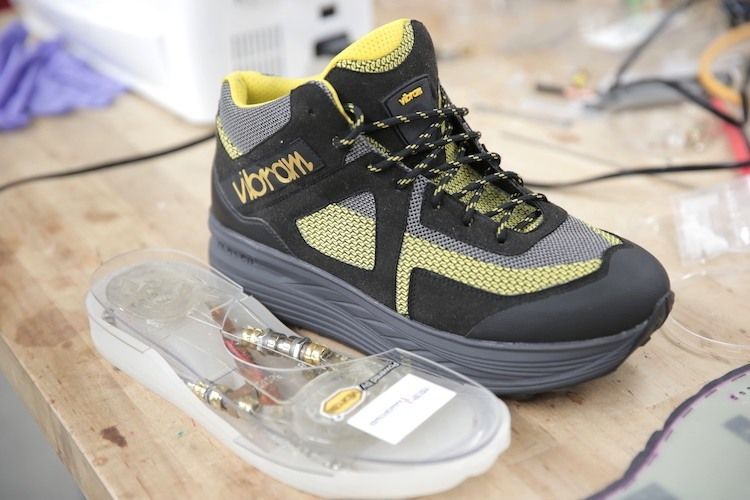 Researchers say this shoe could directly power mobile devices through a charging cable or act as a Wi-Fi hot spot. Photo credit: University of Wisconsin-Madison, College of Engineering

“Theoretical estimates show that it can produce up to 10 watts per shoe, and that energy is just wasted as heat,” Krupenkin continued. “A total of 20 watts from walking is not a small thing, especially compared to the power requirements of the majority of modern mobile devices.” A typical smartphone, for instance, requires less than two watts.

As the news release points out, the shoes could be especially useful for the military as soldiers have to carry heavy electronics such as flashlights, night vision devices, GPS and many pounds of batteries on top of that.

The shoes could also be a source of electricity to people living in developing countries where access to reliable power sources can be difficult.

In the video below, Krupenkin uses the shoes to directly power an LED flashlight.

There are already many other power-generating-shoe concepts, but successfully pulling it off for the market is quite the difficult task. That’s because “traditional approaches to energy harvesting and conversion don’t work well for the relatively small displacements and large forces of footfalls,” according to the researchers.

However, by using a process called “reverse electrowetting,” a phenomenon that Krupenkin and senior scientist J. Ashley Taylor pioneered in 2011, a conductive liquid interacts with a nanofilm-coated surface and the mechanical energy is directly converted into electrical energy.

This method can generate an electrical charge but it requires a high-frequency energy source such as a quickly vibrating or rotating motor.

To solve this problem, the researchers came up with the so-called “bubbler” method which combines reverse electrowetting with the growth and pop of, yes, bubbles.

According to the news release:

The researchers’ bubbler device—which contains no moving mechanical parts—consists of two flat plates separated by a small gap filled with a conductive liquid. The bottom plate is covered with tiny holes through which pressurized gas forms bubbles. The bubbles grow until they’re large enough to touch the top plate, which causes the bubble to collapse.

The speedy, repetitive growth and collapse of bubbles pushes the conductive fluid back and forth, generating electrical charge. 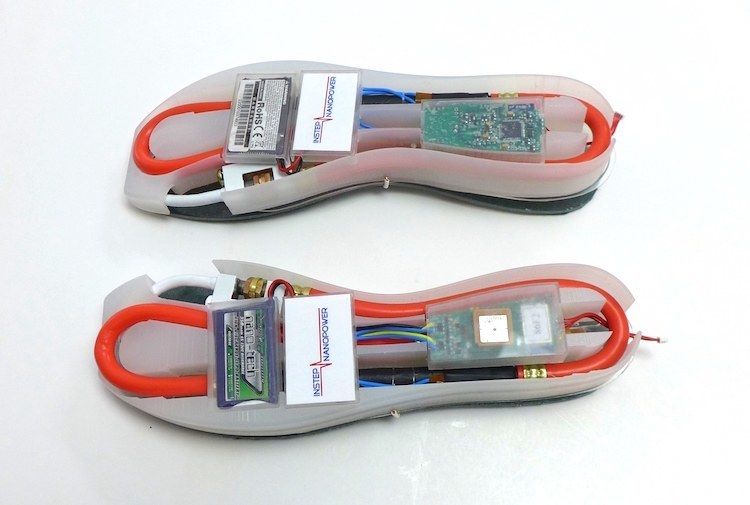 An energy harvester, battery and electronics suite are integrated into each sole. Photo credit: University of Wisconsin-Madison

“The high frequency that you need for efficient energy conversion isn’t coming from your mechanical energy source but instead, it’s an internal property of this bubbler approach,” Krupenkin said.

“The bubbler really shines at producing high power densities. For this type of mechanical energy harvesting, the bubbler has a promise to achieve by far the highest power density ever demonstrated.”

According to the engineers, their harvester can be integrated with a broad range of electronic devices embedded in a shoe, such as a Wi-Fi hot spot that acts as a “middleman” between mobile devices and a wireless network. This process “requires no cables, dramatically cuts the power requirements of wireless mobile devices and can make a cellphone battery last 10 times longer between charges,” they noted.

Krupenkin and Taylor and their startup company, InStep NanoPower, is currently seeking to partner with industry and commercialize a footwear-embedded energy harvester.

The research team published their findings in a paper on Nov. 16, 2015 in the journal Scientific Reports. Additional authors on the s paper include UW-Madison mechanical engineering graduate students Tsung-Hsing Hsu and Supone Manakasettharn.

Learn more about the footwear in the video below.